The anxiousness in the Austro-Hungarian trenches along the Piave river in Italy was obvious at 2:30am on June 15th, 1918.  In 30 minutes, hundreds of thousands of men, supported by nearly 7,000 pieces of heavy artillery, would launch themselves at the Italian line as part of a massive, nearly one-million man offensive designed to finally push Italy out of the war.  Despite the rapidly increasing political disintegration of the Habsburg Empire, if Italy could be dealt one more major blow like they had received the preceding fall at Caporetto, the Dual Monarchy’s last major remaining front would close, perhaps meaning that the Empire could successfully negotiate their way out of the war.  Coupled with Germany’s gains in France as part of their Spring Offensive, a glimmer of hope that the war could be conventionally won, despite all evidence to the contrary, was seen.  The Empire had staked everything on this offensive – either it would be one of the greatest moments in the Dual Monarchy’s history, or it would be a failed gamble that would hasten the polyglot Empire’s end.

At 2:30am, the Piave roared to life with the crashing sounds of artillery.  The offensive wasn’t suppose to begin for another half-hour.  It was Italian artillery.  Rome knew exactly what was about to occur – and was throwing their own million-man army into the attack. 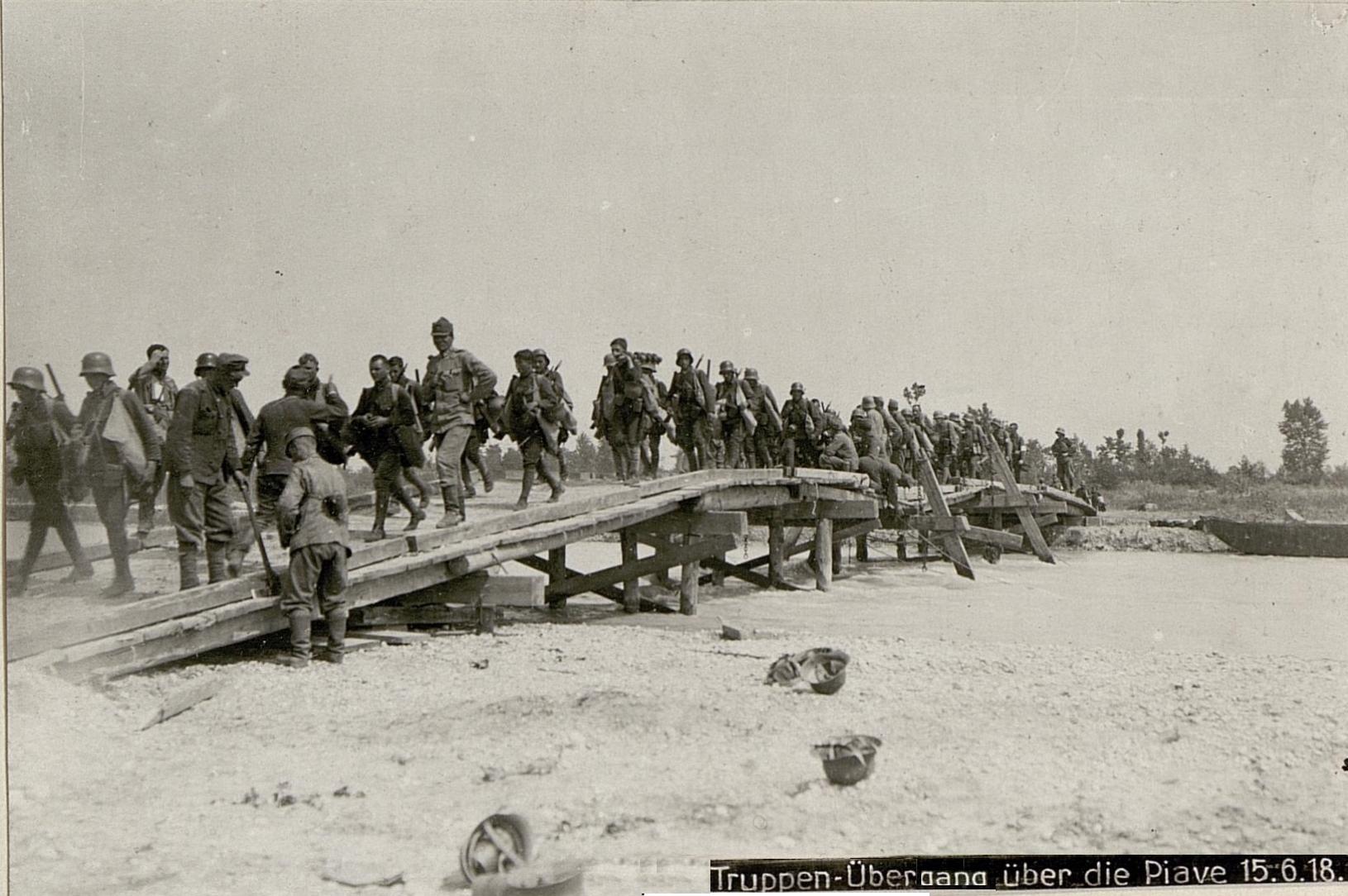 The disaster of Caporetto had shaken the Italian army – and society – to its core.  305,000 casualties, essentially one whole Italian army group, had been destroyed and the Austro-Hungarians sat on the doorstep of the Italian plane.  Only the Piave river blocked any further advance and if Vienna could cross it, there would be no natural boundaries to prevent them from driving deep into northern Italy and capturing most of the Italian industrial base.  Such a strike would almost guarantee that Italy would be forced to sue for peace.

Caporetto had produced one positive for Italy – the fall of Luigi Cadorna.  The man called by historians “one of the most callous and incompetent of [the] First World War commanders,” Cadorna slaughtered his men in fruitless offensives for minimal gains.  Caporetto finally allowed his political stranglehold as Chief of the General Staff to be broken and Rome was now free to embrace new tactics and ideas.  General Armando Diaz was not a particularly gifted tactician, but unlike many of the failed commanders of the Great War, Diaz didn’t attempt to play general and politician all at once.  Diaz also studied the failings of Caporetto and the successes of both sides on other fronts.  By now, for any competent commander in the Great War, the recipe for success was clear – mobility and communication were paramount.  Attacking swiftly on a narrow front and exploiting holes in the enemy line with experienced troops was the key to offensive action, with flexibility and “defense-in-depth” needed when defending.  Diaz set about granting commanders operational independence while providing 6,000 new trucks and a mobile, 19 division reserve that could fly into any area of the front within hours.  Coupled with nearly a dozen British and French divisions and hundreds of new Allied planes, the Italian front had been quickly remade.  Gone were the days of Cadorna’s “to the last man” defense orders.  Diaz was a brutal disciplinarian, but he wasn’t going to fire generals for tactical retreats or randomly execute innocent men because their units were accused of cowardice.

The change in tactics had become apparent just weeks after Caporetto.  Cadorna had attempted to hurriedly build fortified defenses along the Piave, despite the fact that Italian forces were outnumbered two-to-one.  Taking command, Diaz told his commanders to retreat if they felt it was necessary, but counterattack if possible.  The Austro-Hungarians and their German allies, exhausted by the distances covered in their victory, threw themselves repeatedly at the Piave line.  The “elastic reverse” concept that Diaz embraced held the line and bought the Italians badly needed months to reinforce themselves and recover their losses. 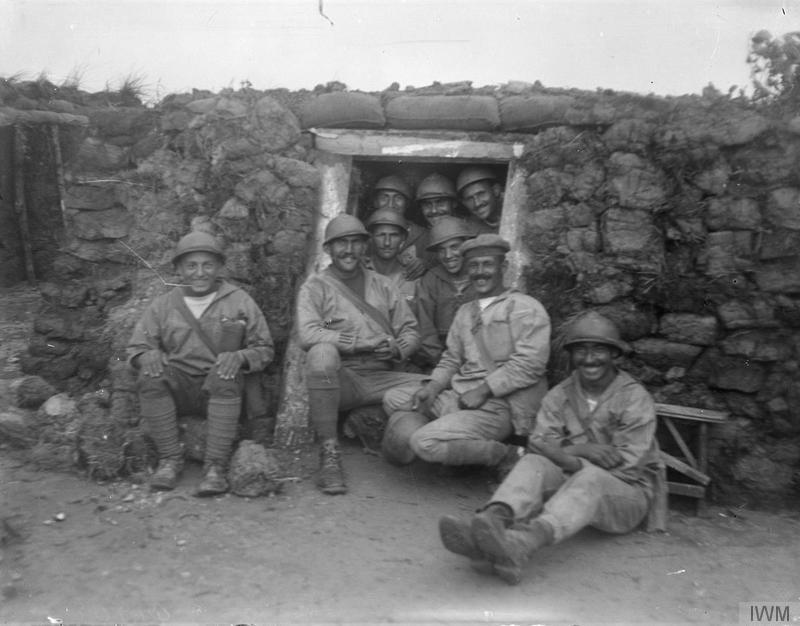 Italian troops in their trenches

Reforms and replacements had also been the key to changing the military fortunes of the Austro-Hungarians.  Newly crowned Emperor Charles I had sacked Conrad von Hötzendorf, who had attempted to wield political influence alongside his military influence, and replaced him with Arthur Arz von Straußenburg, a general that even Hötzendorf viewed as an “honourable, noble character..[an] outstanding general.”  Straußenburg had been the Chief of Staff during Caporetto, but the success of the offensive had rested more in the hands of the German liaison to the Dual Monarchy, Otto von Below.  German troops and tactics had won the day, and now Austria-Hungary was being asked by Berlin to conduct a follow-up offensive plainly without similar support as German troops were needed for their Spring Offensive.

Without German reinforcements and leadership, it soon became clear that despite Vienna’s overhaul at the top, little had structurally changed in the operations of the Dual Monarchy’s military.  Hötzendorf was given a command on the Italian front and wielded considerable influence in either forcing or convincing colleagues to let him overrule orders from the General Staff.  And while Straußenburg was by no means a poor commander, his position rested increasingly upon his personal relationship with Charles I and his willingness to do whatever the young monarch wanted in terms of operations.  Charles I had begun to try and micromanage the war effort and resented what he (probably rightly) perceived as Hötzendorf’s condescension when Charles I even asked his Chief of Staff for basic explanations on strategy.

With his political position evaporating, Charles I likely wanted to force Italy out of the war by all means possible.  Given that Berlin was in the midst of planning their own “war-winning” offensive, the Dual Monarchy found no pushback from their ally despite Germany’s prior hesitancy in both grandiose “war-winning” offensives and allowing the Austro-Hungarians operational freedom.  Nor did it help that Charles I was still under German suspicion from his attempt to independently negotiate his way out of the war.  But their was little unity about how best to strike at the Italians.  Hötzendorf, commanding the northern front, wanted to push from his sector.  Straußenburg and others wanted to continue trying to cross the Piave, which if victorious would threaten cities like Venice.  With the command structure divided on how best to proceed, a compromise was offered – conduct both offensives. 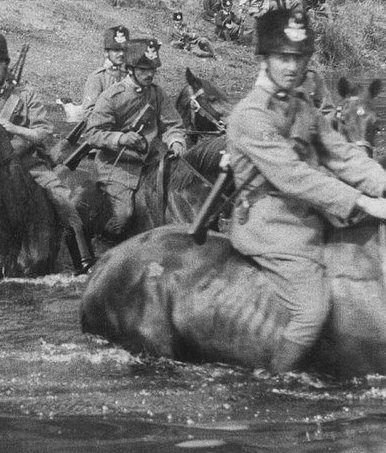 Water Horse – some sections of the river had to be forded

The Austro-Hungarians claimed they were following in the strategy and tactics that the Germans had used to such success on other battlefields.  Instead, they were intent on repeating the errors they had made on the Italian front since 1915.

To complicate matters, Conrad von Hötzendorf attacked two days earlier than the date of the main offensive.  While the former Chief of Staff found himself blunted against largely British and French forces, it cost the Austro-Hungarians the last shred of surprise for the operation, since Italian intelligence had uncovered almost the entire operational plan for the Piave portion of the attack, down to the literal hour of the offensive.  Italian artillery destroyed Austrian units in wholesale fashion in their trenches as they prepared to go on the attack.  Only by near superhuman efforts did soldiers of the Habsburg Empire manage to get over the Piave.

The elastic defense tactics that Diaz had brought to the Italian army now began to truly pay dividends.  Rather than fight tooth and nail to prevent the Austro-Hungarians from getting over the Piave, it became apparent that allowing them over the river would funnel forces into a bottleneck as the river swelled from flooding, making it more and more difficult to keep bridges intact and find areas to ford.  The western bank of the Piave was overrun with Austro-Hungarian soldiers who couldn’t be resupplied and were in exposed positions to Italian artillery.  Within days, the offensive turned into a minor catastrophe.  Hötzendorf’s northern front gained some ground but at a terrible cost while the Dual Monarchy’s generals fought one another for supplies and reinforcements, refusing to cooperate.  By June 20th, Charles I himself attempted to take direct command of the offensive to provide some decisive decision-making to the situation.  It was not to be.  All that was left to manage was trying to get as many soldiers back across the Piave as possible.  Many drowned in the panicked retreat.

For an offensive that barely lasted eight days, the casualty rolls were particularly ominous.  The Austro-Hungarians lost 143,000 men while Italy and her British and French allies lost 87,000.  The front lines hadn’t ultimately changed, but the operation fundamentally altered both sides.

What would become known as the Second Battle of Piave would be Austria-Hungary’s last major offensive of the Great War.  Charles I had lost whatever remaining faith he had in his generals, only refusing Straußenburg’s resignation because the Chief of Staff had stayed unquestioningly loyal (and perhaps was telling Charles I what he wanted to hear).  Even the Germans felt the weight of the failure, with Erich Ludendorff admitting that the outcome had given him “the sensation of defeat for the first time” in terms of the larger war effort.

For the Italians, the sense of victory was far from immediately apparent.  Newly christened Allied Commander-in-Chief Ferdinand Foch lamented that Diaz’s Italian forces had been unable to follow-up the attack with an offensive of their own, but Diaz saw his armies were spread out too thin to do much more than rack up Italian casualties.  But the Italians had won a significant defensive victory and unlike two years prior, they had done so because of their own efforts, not in part because of the Austro-Hungarians having to withdraw due to the Brusilov Offensive.  Nationalist poet Gabriele D’Annunzio, always one for the dramatic gesture, immortalized the attack months later as the “Battle of the Solstice” when he flew to Vienna and dropped 50,000 red, green and white leaflets on the capitol, mocking the Austrian defeat and the rise of Italian power.  D’Annunzio would drop another 350,000 pages in a call to the Austrian people to abandon the Central Powers:

VIENNESE!
Learn to know the Italians.
We are flying over Vienna; we could drop tons of bombs. All we are dropping on you is a greeting of three colors: the three colors of liberty.
We Italians do not make war on children, on old people, on women.
We are making war on your government, the enemy of national liberty, on your blind, stubborn, cruel government that can give you neither peace nor bread, and feeds you hatred and illusions…

PEOPLE OF VIENNA, think of your own fates. Wake up!

It would be a call heeded by the Austrians in a matter of months.

3 thoughts on “Solstice of the Habsburgs”