For an operation that the Dual Monarchy had hinged on careful coordination, seemingly nothing had gone according to plan.

The scale of the forces involved could hardly be concealed.  400,000 men, complete with nearly 2,000 pieces of heavy artillery, had sat nestled into the Austrian Alps for months on the Italian/Austro-Hungarian border.  Record snowfall had kept the men confined to their trenches as whatever element of surprise the Austro-Hungarians once held slowly melted as surely as the white powder around them.

Having been on the defensive in Italy for a year, the Austro-Hungarian troops were now fed promises of dealing their hated Italian enemies a crushing blow.  General Conrad von Hötzendorf, the Dual Monarchy’s Chief of Staff, had labeled the coming offensive a Strafexpedition or “punitive expedition” against Italy.  While the tactical goal was ideally to cut off the Italians from the majority of their armies to the south in the Isonzo river valley, the more honest strategic purpose was simply to raze as much of Italy as possible for having joined the Entente.  At last, the Dual Monarchy was finally prepared to have their revenge.

On May 15th, 1916 the Austro-Hungarian army wasn’t looking to beat Italy, but to punish her.

The ruins of Asiago. The city, deep in what is now northern Italy, then closer to the border, was devastated by the Austro-Hungarian offensive

Long before Italy had cast it’s lot with the Entente, the simmering hostilities between the Dual Monarchy and Rome were well known among the diplomats of Europe.  France’s ambassador to Italy, Camille Barrère, defined the relationship between the two nations as “enemy-allies.”  Despite each nation’s participation in the Triple Alliance with Germany, the Austrians resented their defeats within the Italian Risorgimento and the Italians longed to acquire territory at the Dual Monarchy’s expense.  As late as 1911, the Austro-Hungarians were contemplating a preemptive assault against their nominal Italian allies.

From the Italian perspective, the Triple Alliance had bought them German security from both France and Austria, but also intertwined them in Europe’s diplomatic brinkmanship.  The leadership in Rome had little interest in finding themselves at war with France or Russia over German or Austrian objectives, especially when their allies never consulted them before making their diplomatic maneuvers.  Coupled with Austria’s constant search for a new member of the Triple Alliance to replace Italy (Romania was repeatedly courted), Rome began the 20th Century on the hunt for more independent diplomacy.  The Italio-Russian agreement of territorial spheres of influence at Racconigi in 1909 cemented that Italy was in the process of reaching separate truces with the enemies of their supposed allies.  For Italy, self-preservation was more important that the preservation of the Triple Alliance. 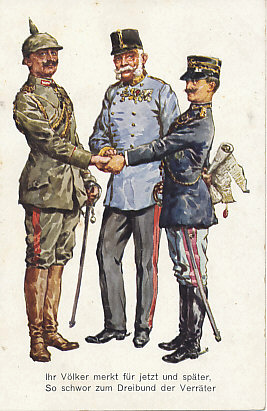 The Italian-Austro/Hungarian relationship had been frayed for decades, with both sides scheming against the other.  Yet as Rome declared war against the Austrians in 1915 (not against Germany, however), the Austrians still perceived the move as treason.  The desire on either side to settle scores dating back to Italian independence hardly needed more fuel for the fire, but Rome’s “betrayal” weighted heavily on Vienna’s strategic considerations.

For the first year, the Italian front had been defined by the butchery at Isonzo.  Five battles along the mountainous Isonzo River had produced over 175,000 Italian and 131,000 Austro-Hungarian casualties for little gain on either side.  Italy’s Commander-in-Chief, Gen. Luigi Cadorna, arguably one of the worst commanders of the entire Great War, had fed his men into the abattoir that was the Julian Alps, with a callous indifference to their losses.

But to the north, on the border of the (then) Austrian province of Trentino, the Austro-Hungarians saw an opportunity to massively outflank the Italian army.  The sector had been quiet since the start of hostilities, and while the terrain was as impassable as Isonzo, the Italian forces holding the area were comparatively light.  If the Dual Monarchy could breakthrough the Italian line in the mountains and reach the open plains below, the majority of the Italian army at Isonzo could be attacked from behind or even surrounded.  In the mind of the Dual Monarchy’s Chief of Staff Conrad von Hötzendorf, such a successful offensive could even knock Italy out of the war.

The Germans, having seen plenty of “war-winning” offensives already that had failed, were far less convinced.  Hötzendorf’s German counterpart, Erick von Falkenhayn, repeatedly tried to convince the Austrians not to attack.  Not only had the terrible spring weather delayed the offensive by weeks, but German intelligence knew that Austrian deserters had already informed the Italians of the battle plan.  Compounding the situation, Hötzendorf had severely depleted the Dual Monarchy’s forces on the Eastern Front in order to launch his Strafexpedition.  Eighteen experienced divisions, use to fighting the Tsar’s under-supplied forces on the open plains of Poland, would be fighting an enemy with better weapons and supplies on some of the worst terrain possible for an offensive.

Hötzendorf would not be dissuaded.  Honor, not to mention the logistical difficulties of moving the men back East, dictated the attack go ahead.  The Germans could only brace for what they assumed would be the worse.

Austro-Hungarian engineers take a break on a mountainside

As Austro-Hungarian artillery hammered the Italian lines on May 15th, 1916, the unintentional key figure aiding the Central Powers was revealed – Gen. Luigi Cadorna.  Cadorna had received the intelligence briefings of the Austro-Hungarian build-up in Trentino, and the warnings about Austria’s objectives from deserters.  He had done nothing with the information.  Cadorna assumed the movements had to be a ruse – the Central Powers could hardly spare men from the Eastern Front and attacking yet another mountain range in the West seemed a fool’s errand.  Cadorna reasoned this was an attempt to distract Italian forces from Isonzo, where in the minds of Rome’s military planners, the decisive battle of the Italian campaign would be fought.

The 2,000 pieces of heavy artillery the Austro-Hungarians had brought to Trentino devastated the Italian line.  Italian reinforcements desperately tried to hold back the flood of 400,000 enemy troops, but within two weeks, the center of the line had cracked and with it, 30,000 Italians became prisoners.  The Venetian plain stood before the Austro-Hungarian army, and with few natural defenses blocking their path, the most optimistic goal of the offensive – the encirclement of Isonzo – was within reach. 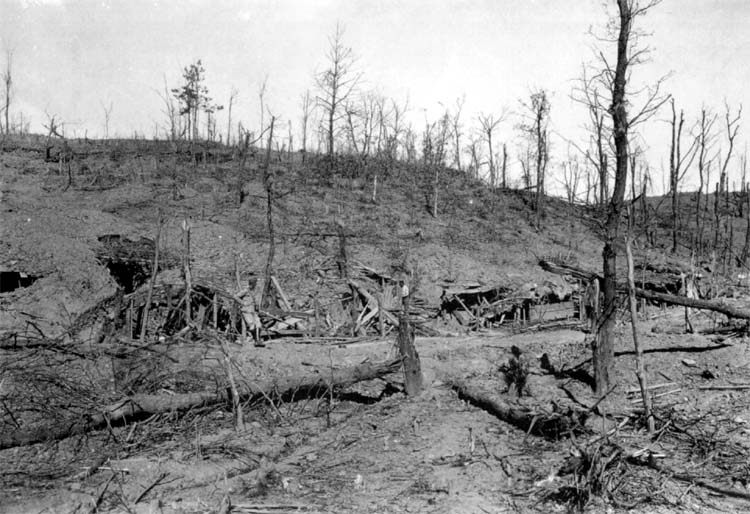 By June 3rd, Cadorna realized the danger to the entire Italian army.  A man with a flare for the dramatic, Cadorna issued a standing order to the Italians in the Venetian plain – “Remember that here we defend the soil of our country and the honor of our army. These positions are to be defended to the death.”  The Italian units followed his orders – most regiments suffered casualties in the range of 2/3rds of their forces.

Cadorna would later attempt to claim that his orders, and his attacks on the flanks of the Austrian advance, finally halted the offensive.  In reality, what would become known as the Battle of Asiago would be decided thousands of miles away in the Carpathians.  The Russian Brusilov offensive that June would produce the largest Entente victory of the war thus far, crippling the Dual Monarchy in part because of Hötzendorf’s decision to move men to the Italian front.  Unable to maintain the offensive after having lost 100,000 in the battle, and pressured in the East, the Strafexpedition ran out of steam.  200,000 out of remaining 300,000 Austro-Hungarians would quickly be shuffled to the Eastern Front, leaving the few troops who remained under a withering Italian counterattack.  At the loss of 140,000 troops, including 50,000 prisoners, the Italians rolled back large chunks of the Austrian gains.

Publicly, the Italians cheered their defensive victory.  Privately, the offensive had broken both sides politically. For the Austro-Hungarian Empire, the defeat at Asiago would precede losing almost one million men on the Eastern Front in the summer of 1916.  With the Empire in chaos and on the brink of surrender, the blame went towards Conrad von Hötzendorf.

Like so many of his contemporaries across Europe, Hötzendorf mingled military affairs with politics – to disastrous results.  Scheming against both the Hungarian prime minister and the Austrian minister-president, Hötzendorf had few political allies outside of the Emperor Franz Joseph.  With the old emperor’s passing in late 1916, what little influence Hötzendorf still had on affairs outside of the General Staff vanished as Charles I took the reigns of power.  Charles had lobbied Franz Joseph repeatedly to sack Hötzendorf, blaming him for the “mismanagement” of the Austro-Hungarian army.  With the scale of the army’s losses compelling the Empire to turn over increasing control to Germany, neither the Germans nor Charles I wanted Hötzendorf in command.  The old general was relieved of his duties in early 1917.  Embittered to the end, Hötzendorf sank into ignominy.  Where he had once been hailed as a military genius, by the end of the Great War, Hötzendorf was thrown into the lot of historical military failures the conflict produced.

Italian soldiers about to be shot by a firing squad. The “victory” at Asiago was followed by the Italian military’s go-to punishment for units that performed poorly – executions, sometimes of men randomly selected from units accused of cowardice

Hötzendorf’s opposite at Asiago, Luigi Cadorna, would emerge from the battle with an improved reputation due largely to his public relations skill.  But the Italian government that supported Cadorna would not be as fortunate.

Just over a year earlier, the Italian Chamber of Deputies had chanted Prime Minister Antonio Salandra’s name as they confidentially marched off to war.  Now, the same Deputies chanted for Salandra’s resignation.  The war had devastated the Italian economy as the wealthy northern provinces churned out weapons and materials at exorbitant prices, financed by low-or-no interest loans from the State.  The rural south depopulated itself as poor farmers left to find work in the cities, or were conscripted into the Italian army.  As with Germany and Russia, with few men left to plant or harvest crops, starvation and inflationary food prices in now overpopulated cities crippled the nation.

On June 11th, 1916, as Austrian forces were slowly being beaten back, Salandra was forced to resign.  He would be the first of Italy’s three different prime ministers during the Great War – none of whom seemed capable of meeting the many crises the war had produced.