The men of the Austro-Hungarian 1st Battalion of the Imperial Rifle Regiment Nr.III likely considered themselves fortunate.  Stationed at the summit of Mount Marmolada, the highest peak in the Dolomites section of the Alps, the soldiers were on a fairly passive part of the Italian front.  Their barracks, build into the mountain side in the summer of 1916, was well protected by rock cliffs, which limited the effectiveness of Italian artillery.  Even the weather was reasonable.  Despite the massive snowfalls of that winter, the temperatures were warming.

The roar that the battalion heard at 5:30 in the morning on Friday, December 13th, 1916, didn’t sound like artillery.  It groaned and seemed to move closer towards them, shaking the very earth under their feet.  Most the men in the unit had been awakened by the sound, only moments before 200,000 tons of snow and ice collapsed on top of them.  In an instant, 270 Austro-Hungarian soldiers were killed by an avalanche – a part of 10,000 men killed by falling snow in December of 1916 alone.

Austro-Hungarian troops survey their position – the Hapsburgs would suffer nearly 2.4 million casualties on the Italian front

It had taken multiple failed offensives, and a nearly successful Austro-Hungarian counter-offensive, but Italy’s fortunes in the Great War had finally improved.

The late summer of 1916 had presented Italy with an opportunity.  Between the Battle of Asiago and the Brusilov Offensive of that summer, the Dual Monarchy was on the verge of a military collapse.  Vienna had transferred hundreds of thousands of men from the Eastern front to the Italian front, and when that gambled failed, had been forced to do the same back to the East as the Romanians pressed into the underbelly of the Habsburg Empire.  Despite five different attempts at breaking the deadlock at Isonzo over the course of a year and a half, for the cost of over 175,000 casualties, Italy now held something it never had before – a numerical advantage.

Italy’s Chief of Staff, Luigi Cadorna, may have been arguably the most callous commander in the entire Great War (he reintroduced “decimation”, the killing of 1 in 10 men in units accused of cowardice), but even he could recognize that Italy held a narrow window in which they could press the attack against a clearly weakened Austria-Hungary.  Within two months of Asiago, Cadorna had shifted most of his forces back to Isonzo where the Italian army had sat on the doorstep of the fortress of Gorizia since the fall of 1915.  Capturing Gorizia would not break the Isonzo front wide open, but would mark the Italian army as one step closer to the critical Ljubljana Gap – the famed meeting point between the Alps and Dinaric Alps.  Beyond the Ljubljana Gap was open terrain and the possibility that Italy could drive deep into the Dual Monarchy. As the literal author of Italian infantry tactics, Luigi Cadorna had little use for strategic creativity.  Cadorna’s penchant for the concentration of firepower had translated into frontal assaults that bordered on the suicidal for men asked to charge machine guns and artillery in the mountainous terrain of the Isonzo.  Even now with a more than 2-to-1 advantage in manpower, Cadorna was unwilling to divide his forces.  But Gen. Luigi Capello saw the possibility of holding the Austro-Hungarian front lines down at Gorizia while striking behind the fortress, cutting off reinforcements.  If successful, the Dual Monarchy would either have to retreat or stand their ground and be surrounded.

Cadorna relented – Capello could split his attacking force.  Italy would be on the march at Isonzo once again.

What would be known as the Sixth Battle of Isonzo would begin on August 6th, 1916 at the town of Doberdò del Lago, just to the south of Gorizia.  50,000 Italians would strike at Doberdò, part of a larger 22 division operation to capture the transport road linking the fortress of Gorizia to the coastal town of Duino. 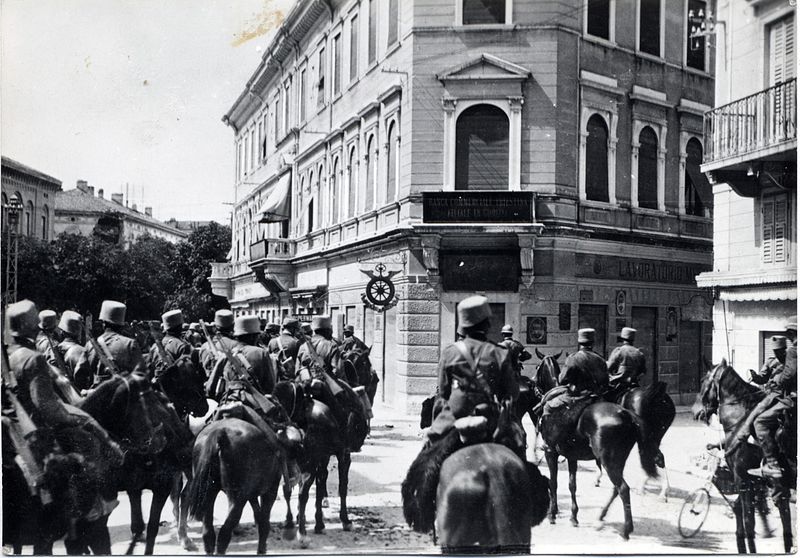 Four divisions launched themselves at the Gorizia front lines – running straight into the teeth of the more prepared Austro-Hungarian defenses.  Despite overwhelming numbers (the Austrians had, at most, 20,000 men at Doberdò), the Italians were cut down like cordwood.  For Gen. Capello, the frontal assaults were a diversionary tactic; for Cadorna, they were integral to the offensive.  Italian reinforcements were fed into the front line, not the flanking attack behind the transport road.  By the end of the first day, 13,500 Italians were dead, wounded or captured.

But the crushing weight of numbers could even overcome Italian incompetence.  As Capello’s flanking attack engaged the enemy on the transport road, the front lines at Doberdò had already cracked.  Unable to retreat back to Gorizia, the Austro-Hungarians surrendered the province and fortress to Italy.  It had taken nearly a year-and-a-half, but Italy was finally across the Isonzo.

For a commander that had wasted lives in fruitless offensives, Cadorna now gave a puzzling order to his victorious men – stop.  While the Sixth Isonzo had been costly, with 51,000 Italians killed or wounded in just over a week, it had also inflicted nearly 42,000 casualties on the Austro-Hungarians who could ill-afford to replace them.  Despite being on the verge of a strategic breakthrough, Cadorna preferred to halt and reinforce his victory.

Italian alpine troops on the march – Italy would 651,000 dead on their main front

Even when he wasn’t ordering his men to attack, Luigi Cadorna was costing lives for Italy.

It would only be a month before Italy would go on the offensive again in the Isonzo river valley, but the delay would be costly.

The Italians still held a numerical advantage over the Austro-Hungarians, but the Habsburgs had retreated to more defensible positions with increased artillery cover.  Cadorna had seemingly learned nothing from Gorizia’s diversionary assault, once again preferring to send thousands of men into the teeth of machine gun fire.  Between September 14th and November 4th, Cadorna would launch three more Isonzo offensives for no gain and the loss of 81,000 men.

If anything, the victory at Gorizia had emboldened both Cadorna and Rome.  Cadorna’s reputation had been horribly stained by his prior Isonzo failures, to say nothing of his utter recklessness with the lives of his men.  But between Asiago and Gorizia, Cadorna could claim to be the most successful Italian general since the Risorgimento, with his victories interpreted as confirmation of his brutal tactics.  Despite Cadorna’s disregard for political authority, no elected figure in Italy had the public credibility – or apparent desire – to force Cadorna out.

King Victor Emmanuel III (center) – the King kept a low profile during the Great War, visiting the front but not weighing in on military matters. He would relieve Cadorna in late 1917

Part of the reason few in power chose to confront Cadorna was that Rome had become equally arrogant in the wake of the Sixth Isonzo.  Italy had thus far only been at war with Austria-Hungary; there was no declaration of war between Germany and Italy.  Flush with success, Rome finally took the step of declaring war against Berlin.  The move greatly simplified Germany’s strategic considerations towards their Austro-Hungarian ally.  German units were now on their way to the Italian/Austro-Hungarian border.  The result would eventually be one of the most humiliating losses in Italian history – a loss that nearly drove Italy out of the war.

That the Italian front had grown quiet after the Ninth Isonzo was hardly a consideration as the Austro-Hungarian 1st Battalion of the Imperial Rifle Regiment Nr.III dug the bodies of their comrades out of the snow on “White Friday.”

Both the Italians and the Austro-Hungarians had attempted to use the elements to their advantage, firing artillery bursts into the mountain snowcaps in the hopes of causing an avalanche.  Whether the tactic every worked or not (and there’s considerably skepticism that it ever did), avalanches would kill at least 60,000 men between both sides on the Italian front.  By comparison, only 25,000 men would die at the hands of poison gas on the Western front during the entire war.

The ghastly legacy of the Isonzo campaign in the Alps – every few years, or whenever the temperatures are warm enough – a few more bodies are found, even 100 years later

The Italian front at Isonzo would remain stable until the spring thaw.  And the resumption of hostilities would bring another 603,000 Italian casualties by the fall of 1917.