For hours, women had gathered in line at the farmer’s market in Cologne.  Before even daybreak, hundreds, and then thousands of German women had lined up to try and be among the first to buy badly needed supplies fresh from the nation’s farms.  The long lines, and limited food stuffs that awaited them, were nothing new.

But the prices were.  The cost of eggs, butter and fat had been raised yet again.  Indignant, the women began to argue with the market’s sellers.  The arguing quickly turned to shoving, as women pushed past farmers to grab what food they could.

Cologne’s police were quick to arrive, which only seemed to anger the women further.  “We want to eat,” the women chanted.  “Our men are fighting for the country, and we are starving!”  With the market’s supplies being overrun, the police drew their sabers and charged into the crowd.  Dozens were wounded as the women fled, trampling five of their fellow protesters to death.  For the next two days, thousands of Cologne’s women rioted in response, smashing the windows of shop keepers they accused of hiking prices, and attacking police units around the city.

In the fall of 1915, Germany and her allies might have been winning on the battlefield, but were losing the war at home. While the Central Powers were experimenting with new technologies to try and win the war, unleashing poison gas and zeppelin raids, the Entente’s most powerful weapon had been among the simplest – starvation.

With the largest navy in the world, and with their French ally sporting a massive armada themselves, Britain’s blockade of Germany was easily accomplished in the war’s opening months.  Britain’s classification of the North Sea as a “war zone” discouraged neutral powers from even attempting to sail, let alone ship any goods that could be considered “contraband” to Kaiser Wilhelm II.  Under most circumstances, contraband would be defined as anything that could be war-related material; for Britain, contraband now included food.

Such a sweeping definition flew in the face of previously established international law.  The second Hague International Peace Convention in 1907 and the International Naval Conference of London in 1909 had protected the rights of neutral vessels so long as they carried strictly civilian supplies.  And as fluid as the term “war munitions” could be (small arms ammunition, like the four million rounds in the Lusitania, were not legally viewed as munitions), the definition of “civilian supplies” seemed more straight-forward.  How was a loaf of bread a weapon of war? American attitudes towards the blockade were surprisingly pro-German to start, since the move hurt the American economy by closing off many European markets.  The German reaction to the blockade (specifically, their submarine attacks) quickly shifted American opinion towards the British position

In the Great War’s opening months, the largest threat to Germany’s blockade appeared to be American politicians, not the sizeable German fleet.

London’s domination of international trade had given them substantial leverage when it came to most neutral powers.  Those neutral nations that refused to cancel their contracts with German industries had more to worry about than the British sinking a ship.  Loans financed through British institutions could be canceled, or merchant ships needing coal could be stranded at one of the numerous coaling stations around the world controlled by the British.  Such threats were rarely required as Britain found a far better tactic to ensure neutral compliance with the blockade – they’d simply buy out the supplies.  The British purchase of almost the entire Norwegian fish market, in one example, not only kept Germany hunger, but starved Norway as well.

Such tactics could work wonders on small, diplomatically isolated nations.  They would have less success on the United States.  The U.S. could finance their own deals through New York, or worse, finance the loans of neutrals whose loans had been cancelled in London.  So threats were out of the equation – but bribery wasn’t.  Britain argued to buy increased American goods and American munitions, at ridiculous prices.  J.P. Morgan Jr. alone earned $30 million ($700 million in today’s dollars), selling munitions to the Entente.  Such commerce kept American politicians, frustrated by the blockade’s economic effects, somewhat mollified. 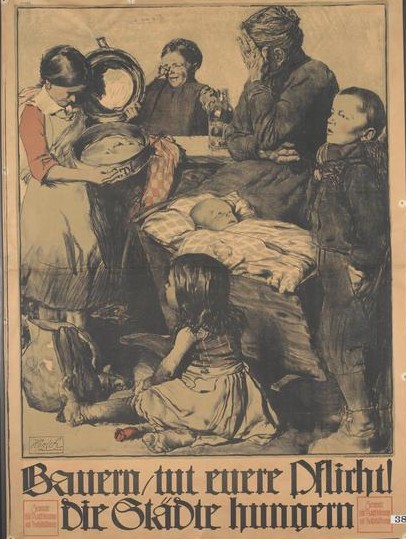 “Farmers, do your duty – the cities are hungry.” German pro-war propaganda

The American public was a different matter.  The news of German food riots as early as December of 1914 brought out American sympathies that the British were targeting German civilians instead of German soldiers.  But such sympathies were quickly crushed between Germany’s zeppelin terror tactics, unrestricted submarine warfare, and the actions of pro-German fanatics.

Between the blockade and anti-German headlines, American trade with the Central Powers declined by 90%. And by the fall of 1915, American complaints about the blockade had largely vanished.  German hopes of international pressure easing the restrictions were gone.

Most of the chemicals that were necessary for German agriculture had been imported.  (the father of chemical warfare, Fritz Haber, had first used his invention to create fertilizer).  Coupled with the manpower shortage from conscripting millions of able-bodied men, German farms lacked the ability to plant, grow and reap crops as they had before the war.  Even with 900,000 POWs being forced to tend to German crops, the labor needs could not be met.  German industry was also placing higher and higher demands on German farms.  A quarter-million cows were needed to build the leak-proof hydrogen chambers of just one zeppelin.  There simply weren’t enough goods to go around.

By 1915 the food situation reached critical levels in urban areas.  The 1914 harvest had already been brought in by the time the war had begun, delaying any immediate effects from the blockade.  But now, food was becoming expensive and scarce.  Rumors began spreading that farmers were stockpiling food for themselves.  The people left on the home front were now largely relying on a diet of potatoes and bread, but now even these were becoming difficult to purchase and heavily diluted.  Factories began turning out Kriegsbrot (“war bread”), a recipe of replacing rye flour with sawdust.

By the start of 1916, soap, fat, cheese, butter and eggs were practically unavailable, while coal, shoes and textiles were scarce at best.  With food prices getting higher and higher, the government implemented maximum prices on certain products, including sugar and potatoes.  To combat the decrease in availability of food, the German government also established compulsory ‘meatless’ and ‘fatless’ days.  The average German citizen was down to 1,700 calories a day – not a significant drop from the recommended 2,000 calories a day – but a figure that represented that despite the nation’s best efforts, Germany was slowing starving to death. Food Where You Can Find It – Berliners carve up a dead horse. By 1917, the average urban German was consuming only 1,000 calories a day

The situation in Germany going into 1917 was one of growing chaos, disorganization, and sickness all stemming from the blockade.  While few individuals starved to death between 1914-1918 –  post-war statistics estimated that 763,000 starved to death because of the blockade – millions did succumb to malnutrition which led to severe decreases in body mass, and nearly constant suffering from various medical aliments.  Between 1913 and 1918 the death rate from tuberculosis in towns with more than 15,000 inhabitants rose 91.1%.  The numbers dying of typhoid doubled between 1916 and 1917.  In Düsseldorf the number of reported cases of dysentry rose from 8 in 1914 to 351 in 1917.  By December of 1918 over half the children in schools suffered from anaemia, and children across Germany were smaller and lighter.

By the summer of 1917, rations were down to 1,000 calories per day and German civilians were being forced to turn to the black market to even get that many calories.  By the end of the war, 1/3rd of Germany’s food supplies were sold “underground.”

Dwindling rations also began to affect the German Army – and not just in terms of food.  Clothing and other equipment also began to diminish in both quantity and quality during the last two years of the war.  By 1917, German soldiers were issued uniforms that were inadequate to keep there bodies warm, or protect them from the elements.  Hundreds of thousands received boots without soles, no socks, jackets without buttons, and shirts made from donated women’s undergarments.  German units were fed considerably better than civilians, averaging 2,900 calories per day.  But that number had dropped since the start of the war and paled by comparison to their Entente counterparts.  British troops averaged 4,000 calories per day amid the grueling physical demands of the trenches.

The blockade of Germany was certainly a terrible hardship on German civilians and Germany’s war industry, but how much of a role did it play in winning the war?

German U-Boat Propaganda – the blockade forced Germany back to their unrestricted submarine warfare tactics, despite concerns doing so would lead to an American entry on the side of the Entente

The immediate interpretation after the armistice was that the blockade had triggered such deprivations that it helped create the conditions for the Kiel mutiny of the German Navy, which is partially credited for ending the war.  That the morale of the German Navy was horrendously low, and that amid negotiations to end the conflict the Navy’s officers were demanding one last major battle with the British, were likely far larger factors in a mutiny that likely had less of an effect on forcing the Great War to a conclusion.

But one can say the blockade won the war for the Entente by forcing Germany’s hand in the reinstatement of unrestricted submarine warfare in 1917 – which led to the entry of the United States into the conflict. 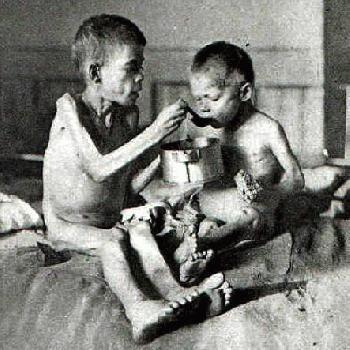 An estimated 763,000 Germans died of starvation or relented illnesses during the Great War. The exact numbers are highly debated

In August of 1916, German women began a letter-writing campaign to the Hamburg Senate, demanding an immediate end to the war.  By early 1917, German laborers (many of them women as well), were now striking in protest as well.  Despite victories in the East by this late date in the war, the condition of the former Tsarist territories was no better than Germany – empty farm fields in Poland weren’t going to supply German markets.

The Kaiser’s government quickly came to believe that Germany’s tolerance for the conflict was reaching a breaking point.  With their armies stalemated in the West, and their attempts to strike British industry via aircraft limited, only unrestricted submarine warfare held the prospect of truly undermining the Allied effort to make war.  Despite the same civilian government protests that had come with the first bout of submarine attacks, the campaign went forward in February of 1917.  Within two months, the U.S. had declared war on Germany – providing the beleaguered Entente with badly needed men, munitions, and morale.