The enthusiasm was contagious in the Italian Chamber of Deputies.  As the 482 Deputies out of the Chamber’s 500 poured into their seats, the Deputies applauded were those who wore military uniforms.  Men hooted, waiving flags amid cries of “Viva Italia!”  For the dozens of diplomatic attendees, ranging from representatives of the Entente to neutral American observers, the atmosphere was more carnival than political.

A few minutes before the session began the Italian nationalist poet, Gabrielle D’Annunzio, appeared in the rear of the public tribune which was so crowded that it seemed impossible to squeeze in anybody else.  But the moment the people saw him they lifted him shoulder high and passed him over their heads to the first row.

The entire chamber, and all those occupying the other tribunes, rose and applauded for five minutes, crying “Viva D’Annunzio!”  Later thousands sent him their cards and in return received his autograph bearing the date of this eventful day.  Premier Antonio Salandra entered, followed by all the members of the Cabinet.  “Viva Salandra!” roared the Deputies, with the cheering lasting longer than anyone cared to count.  After the formalities of the opening of the Chamber, Premier Salandra, deeply moved by the demonstration, arose and said:

“Gentlemen, I have the honor to present to you a bill to meet the eventual expenditures of a national war.”

On May 23rd, 1915, Italy willingly chose to enter the horrors of the Great War.

The Triple Alliance – Italy was allied with the Central Powers before 1914, but felt very much the junior partner. The animosity was mutual – Austria was contemplating a surprise attack against Italy as late as 1911

For most of the combatants in the Great War, their entry into the conflict was, in some way or another, strategic.  Austria had to punish a nation which had assassinated a royal heir.  Germany couldn’t afford to be trapped in a two-front war against Russia and France, and thus felt it had to strike first.  Even Britain, ostensibly fighting for Belgian independence, joined the battle to keep Germany from dominating continental geopolitics.  But for Italy, the Great War was far more ideological.

Since the unification of the country, the Risorgimento, a small but persistent nationalist movement known as the Italia irredenta (Unredeemed Italy) had attempted to expand the newly formed nation’s territories wherever Italians lived.  Territories like the neighboring Austrian Littoral and County of Tyrol held high percentages of native Italians, although not majorities, making for fertile expansionist ground.  Coupled with the Habsburg monarchy’s opposition to Italian unification, a war against the Dual Monarchy seemed inevitable.

In the decades that followed, Italian expansion would occur overseas, not over the Austrian border.  Italian imperial conquests in Eritrea and Libya shifted Rome’s view to Africa, while France’s colonial grab in Tunisia moved the nation’s concerns to Paris.  By the late 1800’s France, not Austria-Hungry, appeared to be emerging as Italy’s most threatening neighbor.

One Shade of Grey: British Foreign Secretary Edward Grey convinced Italy to join the war on the side of the Entente, despite his pessimissic view on the war itself: “The lamps are going out all over Europe. We shall not see them lit again in our time”

Rome’s suspicion of Paris fostered a new alliance with Germany.  Despite Germany’s close cultural, political and military ties with Austria-Hungry, Italy’s entrance into the Triple Alliance appeared as a relative foreign policy win for both young nations.  Germany gained a potential southern front in the future event of another war with France.  Italy gained a protector against French imperial ambitions and a check against Austrian intrigues.

It was an imperfect fit for an alliance – two autocratic imperial powers joined by a weak, and chaotic, democracy that harbored deep resentment against one of their supposed “allies.”  And it would not withstand the weight of the Great War.

Portrait of the Dictator as a Young Man – Benito Mussolini, serving in the Great War. One of Italy’s most prominent anti-war speakers, Mussolini changed his tune in the fall of 1914

Thirty years of history could not save the Triple Alliance once the first shots in Europe were fired.

While Italian politicians declared the alliance defensive in nature, allowing them to forgo declaring war against the Entente, the Italian populace voted with their feet as to who they supported in the conflict – thousands of Italians volunteered in the French army alone.  Beyond the carnage in the trenches in France, Rome had good reason to avoid embroiling itself in Europe’s war.  Strikes and violence between workers group and the government had defined Italy’s politics for decades, and the conflict had seemingly reached its zenith in the summer of 1914 with “Red Week” – a week-long strike across parts of the country.  Spurred on by the Socialist newspaper Avanti! and its editor, a rabble rouser by the name of Benito Mussolini, Italy seemed more divided that it had been since unification. 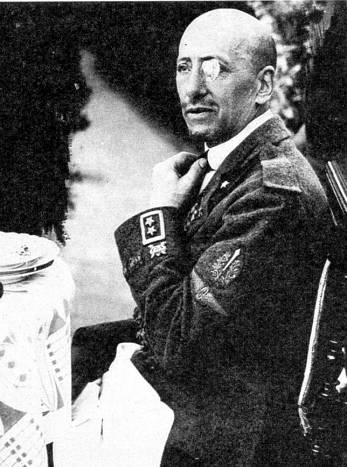 Gabriele D’Annunzio – Italy’s warrior poet. D’Annunzio was one of the foremost private citizens to push for Italy’s entrance into the war. He would later become one of the intellectual founders of Fascism and a Mussolini ally

While the initial reaction to the conflict saw the predictable propaganda from Italy’s Socialists that the war was one for imperialism and capitalism, privately, the Italian Socialist Party wondered if the war would create the ideal ingredients for social revolution.  Certainly Italy couldn’t defend the survival of the ancien régimes in Germany and Austria, but was Tsarist Russia any better?  Or Imperialist Britain?  Besides, the war appeared to be a political tonic to the ruling Liberal Party in Rome, who used the promise of entering the conflict as a unifying balm.  For Italy’s Socialists, politics, as well as prudence, dictated neutrality.

Not all Socialists agreed.  With the promise of a quick war done by Christmas all but a distant memory, Italy’s entrance could be imagined as the spark to provide victory to the struggling Entente.  A victorious Italy could dictate terms to the Central Powers, placing the nation among the powers of Europe.  “Do you want to be spectators in this great drama?,” Mussolini raged to the Italian Socialist Party in the fall of 1914, “or do you want to be its fighters?”

As 1914 became 1915, the mood among Italians of all political persuasions was clear – national honor, and ethnic unity, was on the line.  The promise of the Risorgimento was yet unfulfilled.  Italy could only be “redeemed” through war. 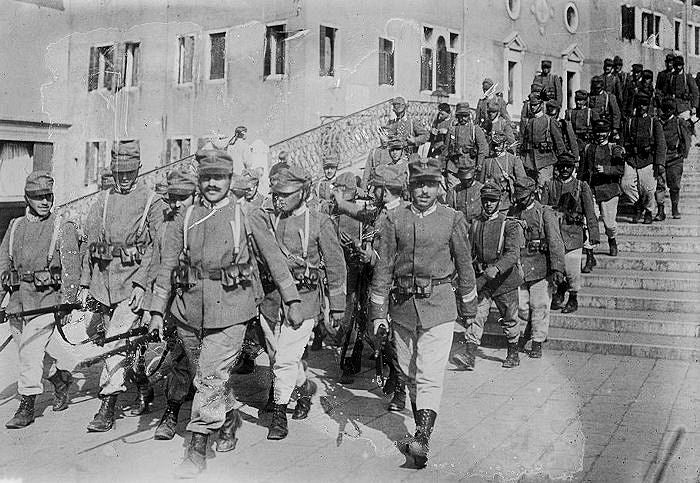 Italy boasted they had “one million bayonets” as they declared war. In reality, the army was significantly under-supplied, having not even made up for equipment losses in the war to seize Libya in 1911

In choosing to go to war, Italy also chose their price as an ally.

Throughout the early months of 1915, the Italians engaged in negotiations with the Entente over the spoils of war.  In return for a declaration of war against the Central Powers, Italy would receive Austrian territory, chunks of what are now Yugoslavia, and be given a protectorate status over Albania.  In addition, Italy’s burgeoning empire would gain German African lands, Chinese cities and the Antalya Province in southern Turkey.  On paper, Italy would acquire a vast, far-flung empire.  In reality, Italy was joining the madness of the trenches for scraps in the eyes of the Entente.

Frustrated on all fronts, and losing on some, the Entente was attempting to flog the sinking morale of the alliance’s governments by carving up the empires of their opponents.  Sir Edmund Grey, Britain’s Foreign Secretary, led this charge, drafting the London Treaty that brought Italy into the war, the Sykes-Picot Agreement that would slice up the Ottoman Empire, and the early alliances with Arab tribes with the vague promises of independence.  All of these treaties would become null and void by the end of the war, stoking resentment among the war’s victors, especially nationalist Italians who would eventually call their participation a “mutilated victory.”

Considering the war would end with Austrian troops still on Italian soil and over 1.6 million Italian casualties, there would be hardly any victory to find among the mutilation. A frozen Italian soldier – the nation would lose over 651,000 men, with another nearly 1 million wounded

Such outcomes were unknown on May 23rd, 1915.  Drunk on nationalist zeal and military overconfidence, the Italians gladly marched off to war, having learned nothing from the combat experiences of their neighboring nations.

Along the mountainous banks of the Isonzo River, the Italians would the same trench warfare the rest of the participants in Europe had discovered.  In twelve (12!) battles along the Isonzo, the Italians would suffer nearly half of all the casualties they would incur in the Great War, exhausting their army by 1916 and nearly breaking it completely the following year.