I attended not one, but two gun-grabber “rallies” yesterday – June 2, which the gun grabbers are trying to turn into a national event.  It’s the birthday of the girl who sang at Obama’s first inauguration – and then was killed weeks later.

Killed by whom?  How?

Well, that never popped up at any of the rallies.

More on that later.

The Mean, Leafy, Bucolic Streets Of Eagan:  I went to the first rally at Blackhawk park – in the midst of a particularly tony,well-to-to, violence-free  subdivision in Eagan, 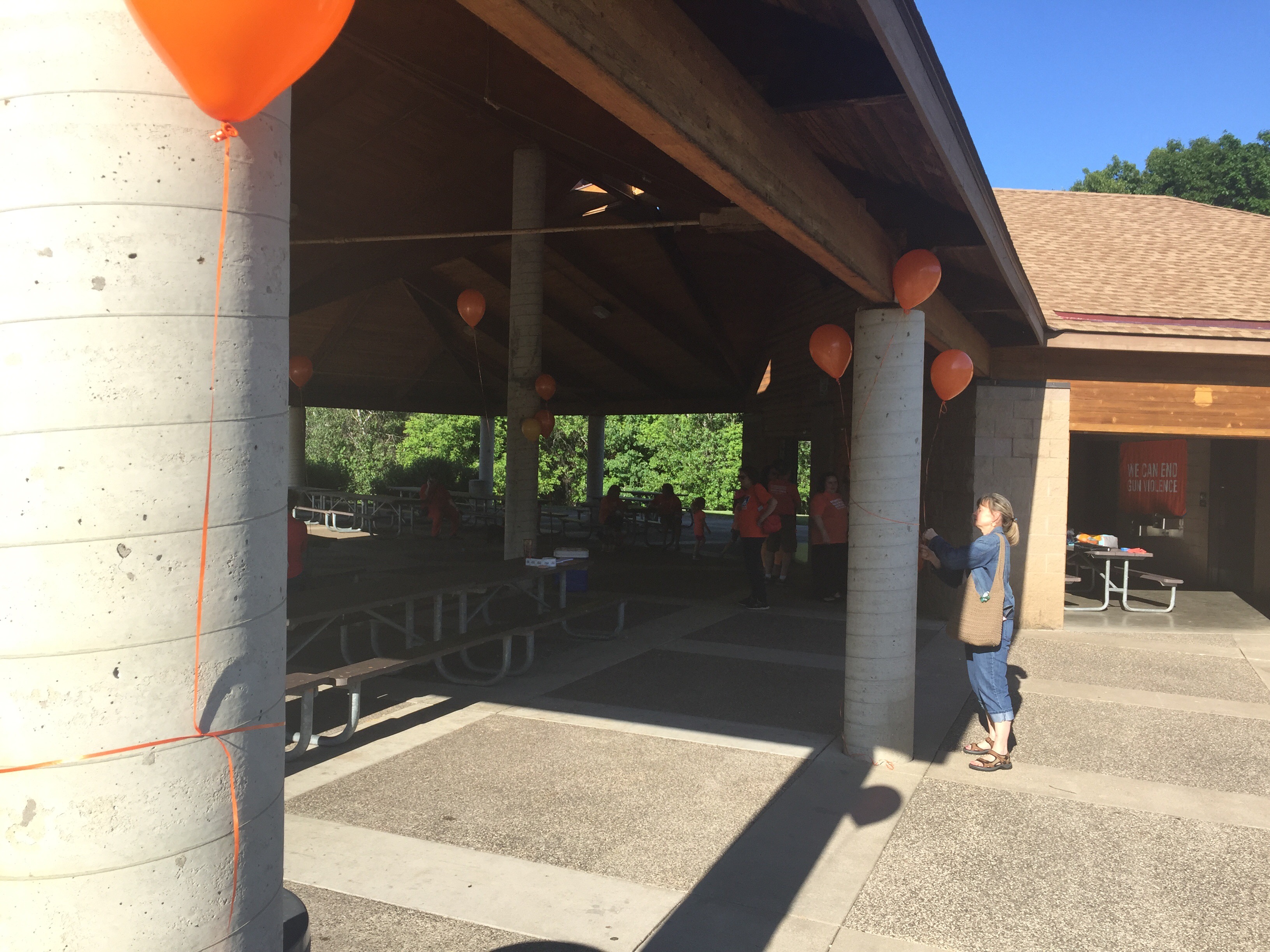 30-odd very south-suburban looking people showed up – 8 or nine of them kids.

They did have a whole bunch of professionally-printed banners… 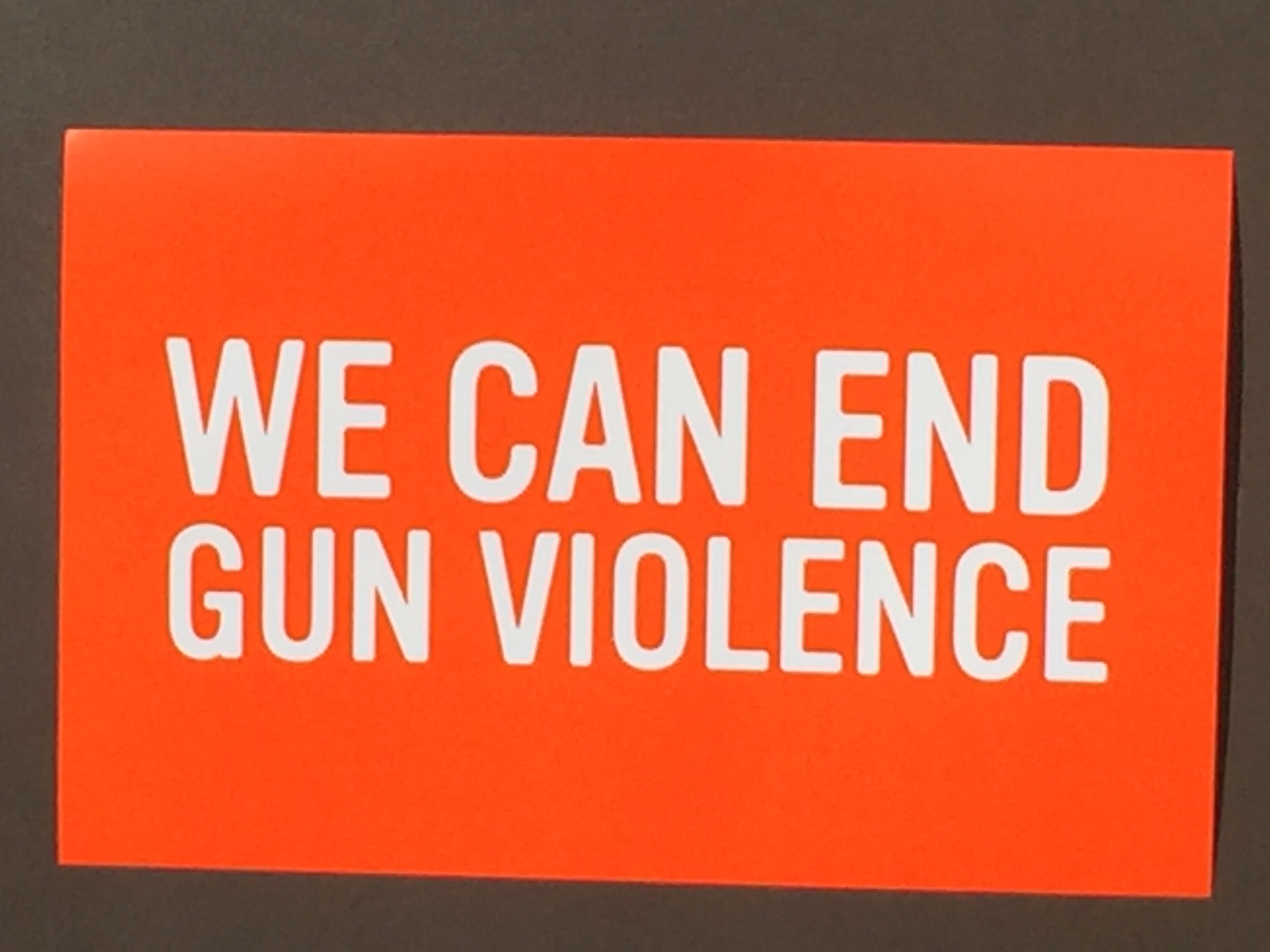 Although the person in charge of bringing the hot dog buns was half an hour late.

The speakers – a couple of younger, non-profit-y looking women, one of whom identified herself as the “south suburban director” for Moms Want Action, spoke.  Or at least recited some anti-gun chanting points (mostly “cities that enact gun control get results!”, and “background checks would prevent suicide” and the like). 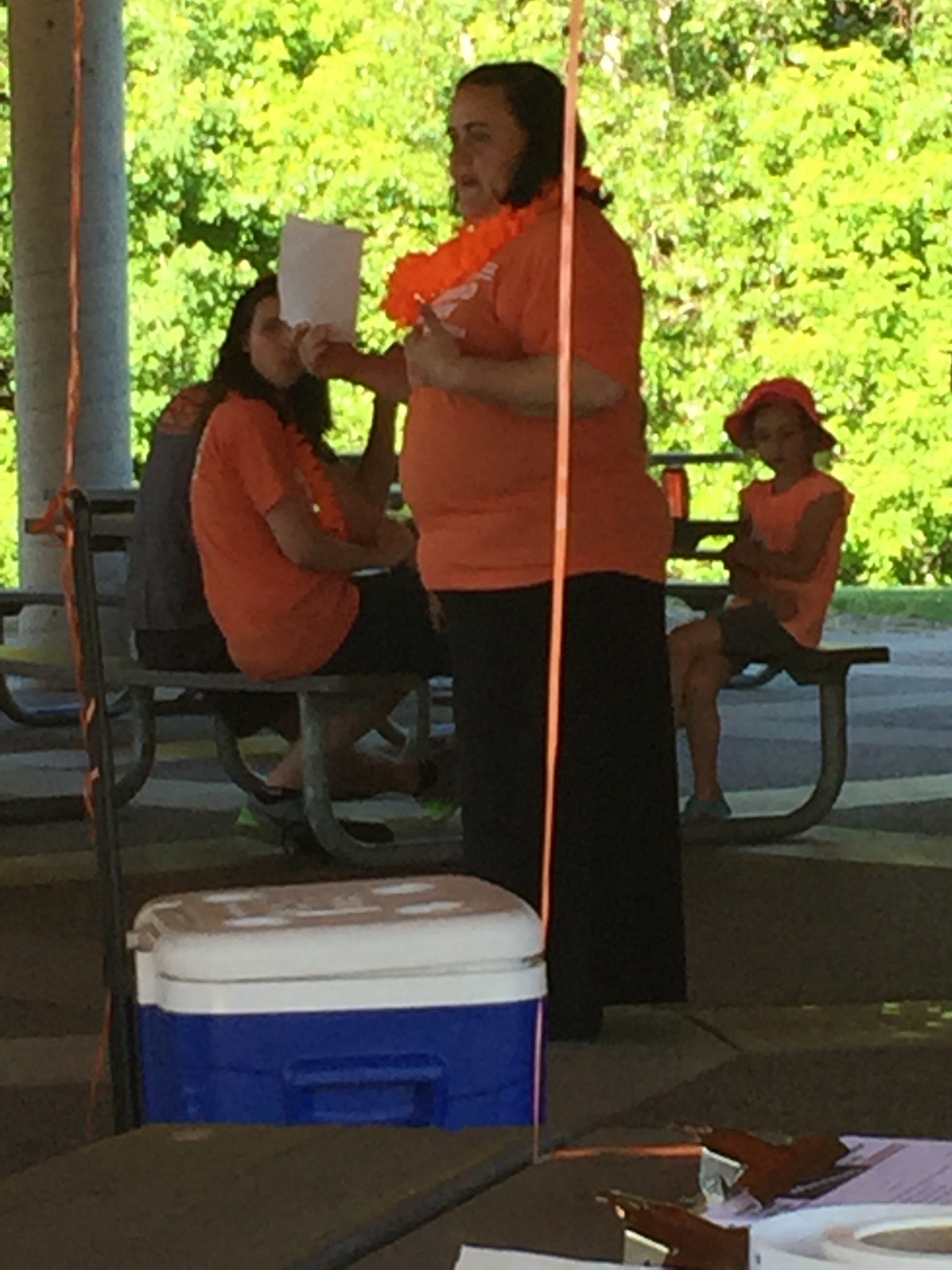 Anna Olson – I think I got the name right – the South Metro Coordinator for Moms Want Action. 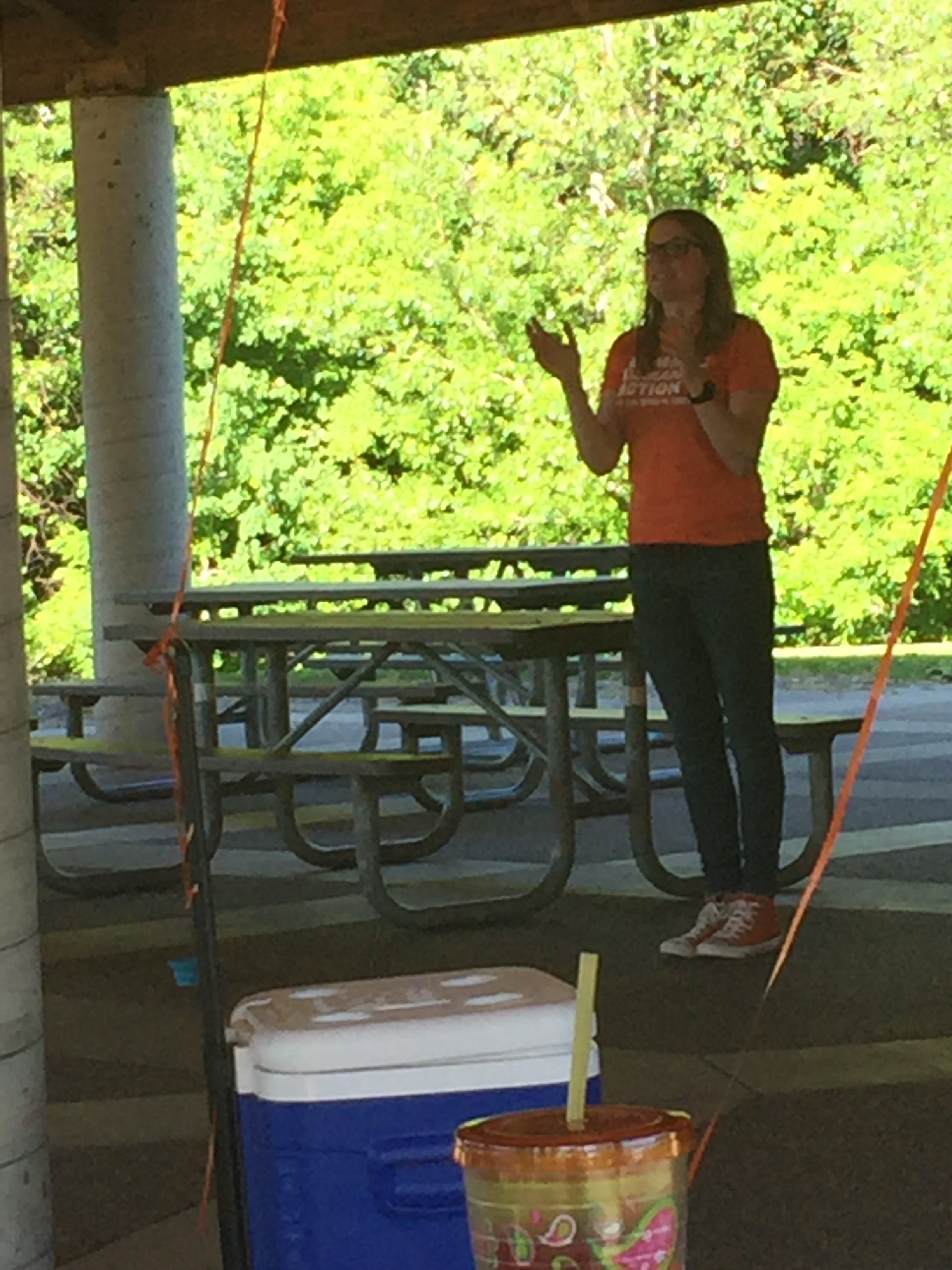 “We are definitely part of a huge movement”, one of the non-profit-y-looking dreamsicle girls said to the sparse crowd.

Miss Non-Profit pointed out what a number of shooters had suspected; the orange shirt theme – which served to make everyone present look like Dreamsicles – is intentionally a play on “Blaze orange”, the hunter’s color that says “don’t shoot me”.  She also noted that the Dreamsicle Festival had been endorsed by Governor Dayton, Mayors Coleman and Hodges…and the mayor of Eagan.

Another man – he didn’t speak very loudly, and so I suspect his name is not “Bob Mucus”, although as God is my witness that’s what it sounded like – gave the keynote speech. 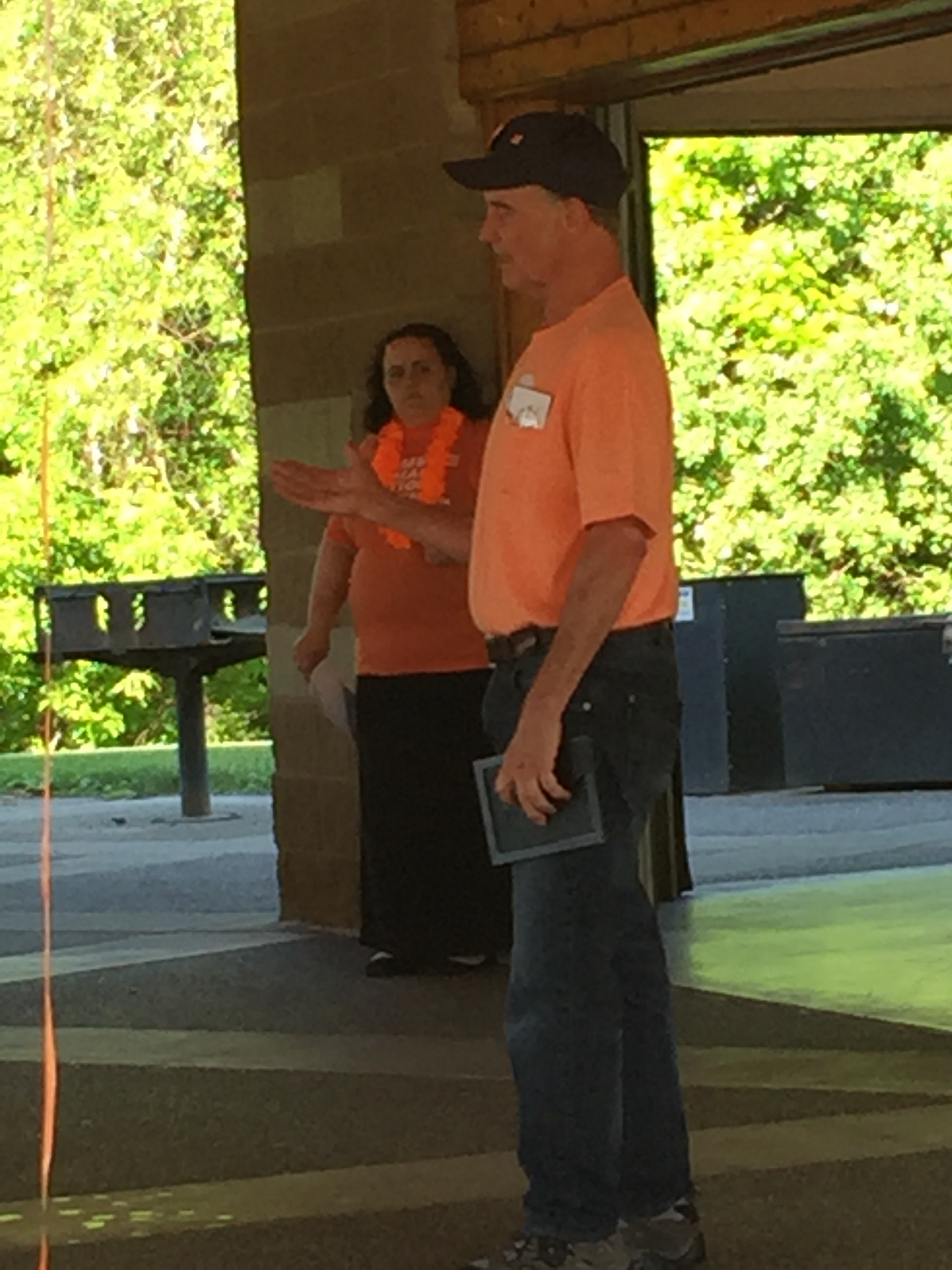 Mr…er, Bob, introduced himself as a man who’d spent his life around guns; not only a hunter, but someone who was “qualified to carry a gun in the cockpit” for some reason.

He also introduced himself himself as someone who had someone in his life who had “died at the hands of a gun”.  His sister – a 46 year old divorced mother of four who worked as a nurse at an inner-city hospital, was apparently shot by a gun as she was getting out of a car.  He also noted two junior high classmates – one who’d been murdered, and one who’d commited suicide.  Apparently both by guns that had nobody controlling them.  (He also noted that “91% of people want background checks”).

I was, indeed, tempted – as, no doubt, many of you are now – to ask “so, did they ever find a perp?  Did he/she have a criminal record?  Did they ever ascertain a motive?” but it didn’t seem like the time of the place.

About this time, I wanted to get up and ask “So why are you having this ‘rally’ here, rather than on the North Side, Dayton’s Bluff or along University Avenue?”

But I left.  I’m not going to say these people live in a world of their own – but I could have sworn I saw, sitting on a branch of a nearby tree, a grin, not attached to any sort of cat at all.

Down By The River, I…Well, You Know:  Next, I drove to the mean streets of North Minneapolis.

Not an orange shirt in sight.

So I checked my phone – and found that the Dreamsicle Rally was being held at the south end of the Stone Arch Bridge.  Alongside the Guthrie, the Mill City Museum, the Whitney Hotel, and blocks of upper-middle-class condos. 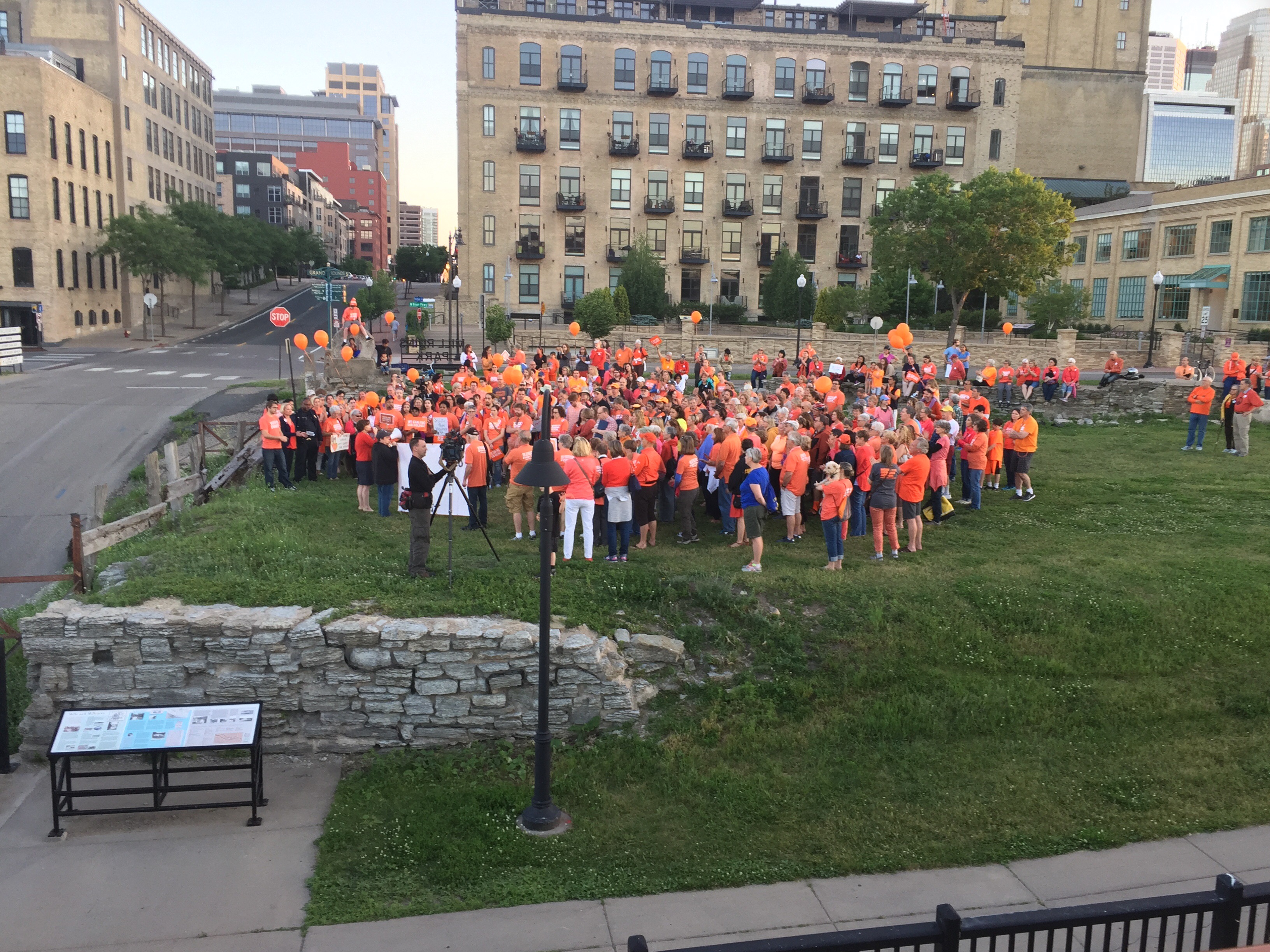 You count ’em. 150? 200? GOCRA turns out 2-3 times this many on a freezing January night for legislative hearings, without breaking a sweat.

I caught the end of what looked like Betsy Hodges’ speech – which was, point for point, the same speech that the non-profity-looking women in Eagan had given.

As in, they’d memorized the same chanting points from New York, down to the inflection. 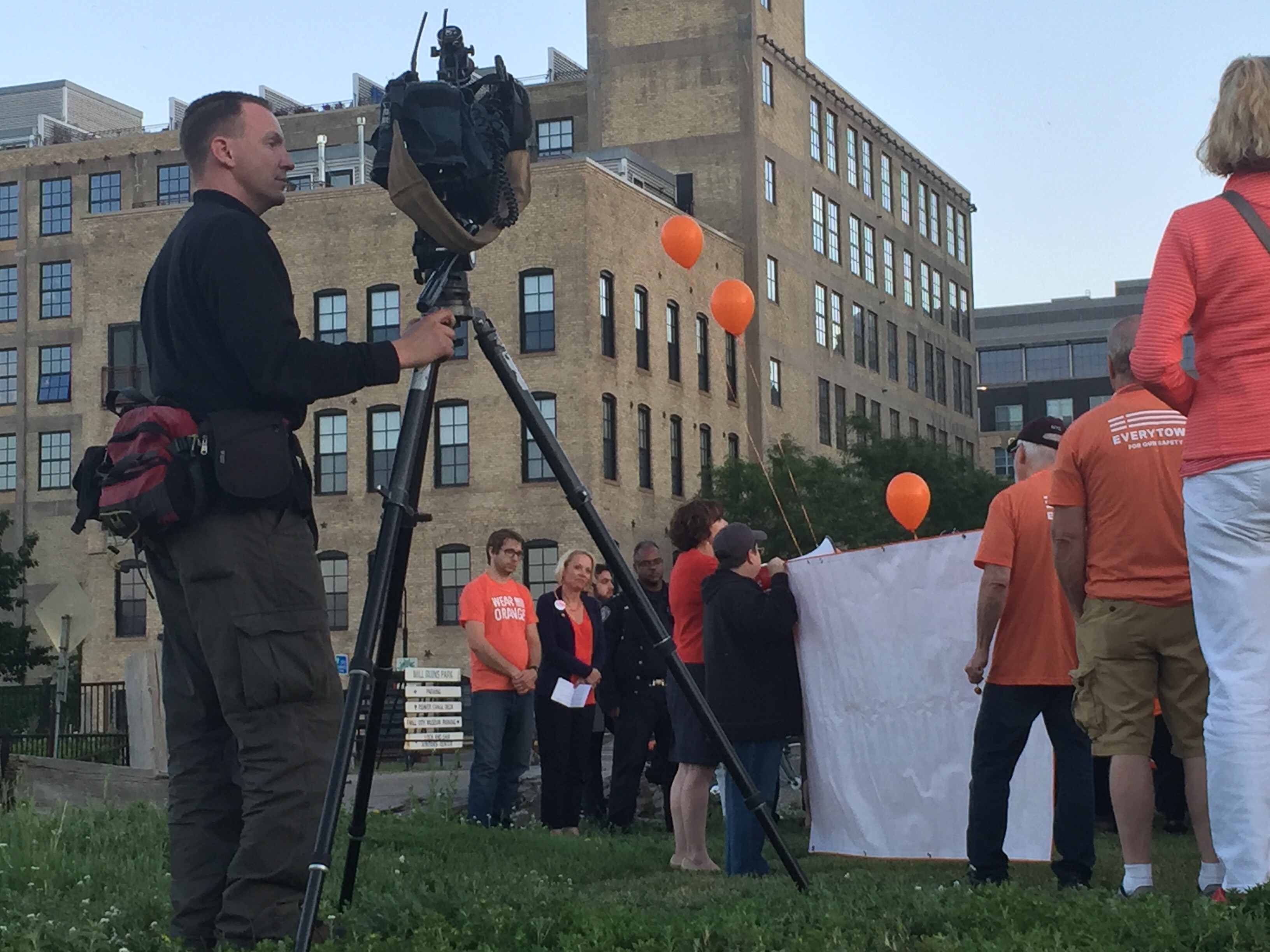 Coverage. Probably the Uptake, or perhaps Moms Want Action’s own video stream. Not sure. All I know is, there’s a reason they were getting only close, tight shots.

If you follow this subject, you know that gun grabbers rarely know the subject all that well.  Councilman Frey shouted “we’re not talking about taking grandpa’s hunting rifle – we’re talking about background checks – because nobody needs to unload 30 rounds before they reload!”

But that had nothing on the schizophrenia of the City Council’s resolution – which, on the one hand, had plenty of moderate-ish sounding language about the Second Amendment being a right (which drew a few boos, including from the dreamsicles I was standing next to), but on the other hand “gun violence” being a “public health issue”.

Then there was a proclamation from Governor Dayton declaring June 2 something or another, and declaring that the 35W bridge would be Dreamsicle Orange: 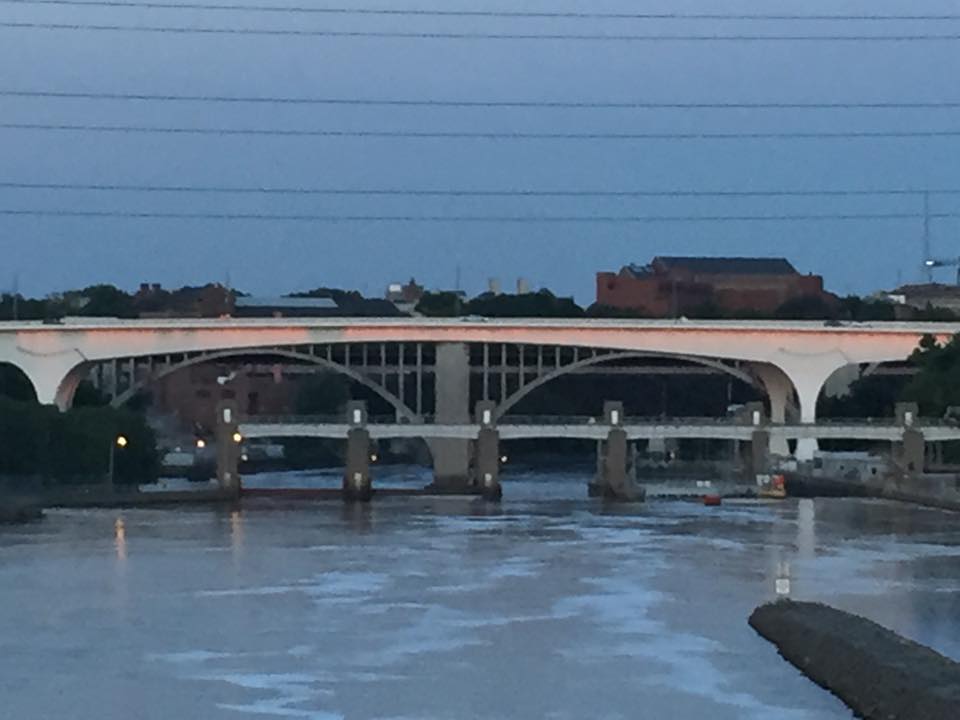 “What can we do about violence in North Minneapolis?” “Change the light-bulb filters on the 35W bridge?” “Booyah! You’re a genius!”

No word on whether the Lowry Bridge would be lit up orange, I thought as I left.

Absent:  Two things the two rallies had in common?

Almost every single chanting point.  Seriously – it was like they were reading off the same teleprompter.

And in no rally, ever, not once, was a perpetrator mentioned.  All of the guns used in all of the violence were apparently self-animated!

You have never heard a single gun-grabber, not a single dreamsicle, refer to a murderer (with the occasional exception of Adam Lanza or Jared Loughner or the Boulder guy, who were motivated by insanity rather than being just the garden-variety criminals that commit 90% of this nation’s homicides.

One other thing you never heard?