All this week we’ve been talking about “Protect” Minnesota’s press release, a week ago today.

And when I say “talking”, I mean “checking its many false assertions, and mocking it to a fine sheen”.

I – like the release itself – saved the worst for last.

Like Going To Courtney Love For Legal Advice:  We noted yesterday – the Reverend Nord Bence is utterly unclear on how self-defense law works.

In this next bit, she transposes that ignorance onto society at large.   I’m going to add emphasis:

Moreover, the Stand Your Ground bill represents a particular threat to people of color and immigrants, who are often met with suspicion by Minnesotans because they look and dress differently. If it were to pass, almost any shooting could be justified because the shooter “felt threatened,” even if the “threat” was a hoodie or a hijab.

This is a flaming lie. 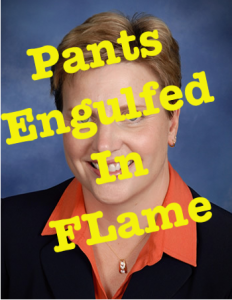 You can not kill people because they make you nervous. Don’t be a moron.

Nord Bence isn’t the first to use it, of course; when self-defense reform was passed (with a bipartisan majority) in 2012, liberal commentators – from bloggers to Dakota County Prosecutor Jim Backstrom and Chaska police chief Scott Knight – made the same claim; that you could kill someone who “gave you stink-eye” or who “made you feel uncomfortable”.

It’s a lie, of course; “I felt uncomfortable” or “I’m scared of hijabs” is not “reasonable fear of imminent death or great bodily harm.”

And if the legal system started letting people off the hook for shooting people for those reasons, then it really, really wouldn’t be the guns’ fault.

And I can’t prove it, but I suspect Nord Bence knows this; while she eschews discussion with people who actually know the issue, she’s certainly had people try to set her straight.    At any rate, it’s a cynical lie, made in a complete vacuum of truth.  She should be ashamed, and I am looking forward to the chance to tell her to her face.

Already minorities are purchasing more guns than ever before because they feel afraid2;

Well, to be fair, the media did spend an entire election cycle pumping up irrational fear.  And they do have the same legal right to arm themselves that everyone else does.  I encourage law-abiding minorities to avail themselves of their rights (not “privileges”) along with the rest of us.

And for all the media’s manufactured barbering over “Stand Your Ground”, there are two facts they somehow never get around to:

passage of this bill could lead to a wholesale arming of communities that feel threatened by it.

Which, I suspect, is the part that bothers Nord Bence and her followers the most.  There’s a reason why their events – every last one – take place in lilywhite places like Eagan, and Burnsville, and Kenwood, and at the south end of the Stone Arch Bridge, and not at Plymouth and Sheridan, after all.

Finally:  We wrap up with the big finish:

Protect Minnesota calls upon all Minnesota citizens—84% of whom support comprehensive background checks to keep firearms out of dangerous hands–to voice their opposition to the passage of these radical bills. We call upon leaders from both parties in the legislature to keep these bills from moving forward.

Every anti-gun legislator outside the metro area has been defeated; ask them how many Minnesotans support background checks?  Support for both bills is bipartisan and spread throughout this state, just like in 2012.

So when The Reverend Nancy Nord Bence says: 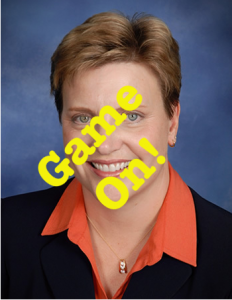 Yep, Reverend. Game on indeed. See you at the Capitol. I’ll be the one that’s part of a big freaking crowd of friendly, courteous, hardworking Minnesotans. You’ll be the one mincing about at the head of your pack of shrill husks. Bring the pain, ma’am.

And we call on Gov. Dayton to promise to veto these bills if they pass, confident that he will recognize them as bad for Minnesota and dangerous for Minnesotans.

Once again, answer to your party’s lunatic fringe, and veto two bills that will pass with unanimous GOP support, and that of every DFLer who’s more than half an hour from downtown Minneapolis.

Give the GOP a club to use to smack up every DFL representative in the third tier of ‘burbs.  Give the GOP a statewide rallying point against the next DFL candidate for governor.  Turn the masses of shooters out; they tend to dial back the intensity of their activism unless they have something to rally around, more’s the pity, but this will serve nicely.

By all means, follow the advice of a woman who, to be charitable, has just expressed cataclysmic ignorance of every single fact she presented in this Doestoyevskian press release.  Of a woman who, as I’ve shown, is wrong on every single substantive claim she tried to make (and she knows it; it’s why she never, ever faces Human Rights advocates in open debate).

Follow the advice of a woman who might, on a big day, muster 100 middle aged white people with ELCA hair to phumpher and rut about, against the masses who turn out on sub-zero evenings in Saint Paul against her, and routinely melt down the Capitol switchboard, just in time for the gubernatorial campaign.

So yes, Governor Dayton.  Take the advice of the Right Reverend, and sow the wind.  The DFL will reap the whirlwind in 2018.

Or, y’know, just sign the bills, follow the will of the people (who’ve been paying attention), and leave the state a slightly better place, at least in one area.

5 thoughts on “The Gang That Couldn’t Not Shoot, Straight, Part V: Everyone With ELCA Hair Looks The Same”