Angie Craig would seem to have been the first person in the world to have discovered an “NRA sharpshooter” who keeps his finger on the trigger while racking a round.

He also points the gun at his hand during the course of the commercial.

If you’re a non-shooter: “Keep your finger off the trigger until you’re ready to shoot” and “don’t point your gun at something you’re not willing to destroy, right now” are two of the inviolable rules of gun safety. 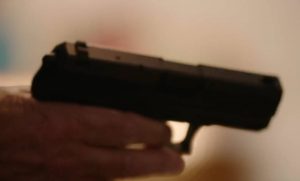 “Sharpshooter”? Please. Any competent range safety officer would look at this and yell at him so hard it’d give him dermabrasion. This is Angie Craig’s tame Fudd shooter.

Anyone breaking those rules claiming to be a “sharpshooter” of any kind is a fraud and a liar. And so is any politician putting them out there.

If this guy is a credible voice for shooters, I’m a point guard on the Portland Trailblazers. And Angie Craig is, well, a businesswoman.

In fact, the guy in the ad is a known gun control activist – and if he was ever an NRA member, it was a long, long time ago. Judging by his grip, that was the last time he shot a firearm, too. The ad is playing to what we human rights activists call the “Fudds ” – hunters who figure, wrongly, that gun controllers will never come for their deer rifles and duck guns.

This ad – and Angie Craig – need to be mocked and taunted.

Pass the video around for suitable mocking and taunting.

UPDATE:  The guy is “Bob Mokos”, and we’ve sort of met.  I went to the “Protect” MN / Moms Want Action event  oin the . mean streets of Eagan a couple years ago.   I saw him give his speech.   And I was struck – then as now – by the fact that at no point in his story about his sister’s murder did he ever mention a perpetrator.

Seemed odd to me.