While the “World War 2 – Fact and Myth” series of pieces tied to anniversaries of under-covered events of the war officially ended on VJ Day, First Ringer and I both found that the crush of events around actual life led to us missing deadlines to a few stories we really, really wanted to write.

So we’ll be filling in a few in coming months, on the way to a completely different project.  More on that, later.

World War 2 was not only the greatest conflagration in human history – it also led to the greatest advance in industry since the Industrial Revolution, and some of the greatest relative leaps of science, and especially technology, ever.

And leading the way, naturally, were the major powers; the elitist craftsmanship and ingenuity of the British, the innovatory engineering prowess of the Germans, and the relatively nimble manufacturing brawn of the United States.

But along the way, a few other nations contributed lesser-known, but vital, advances to techology, on both sides of the war.

There were plenty of them, of course.  For all their ingenuity at building planes and tanks and submarines, the Germans never did design a workable aerial torpedo; they had to buy theirs from the Italians, and eventually pillage them from the Norwegians, who built an excellent aerial torpedo before the war: 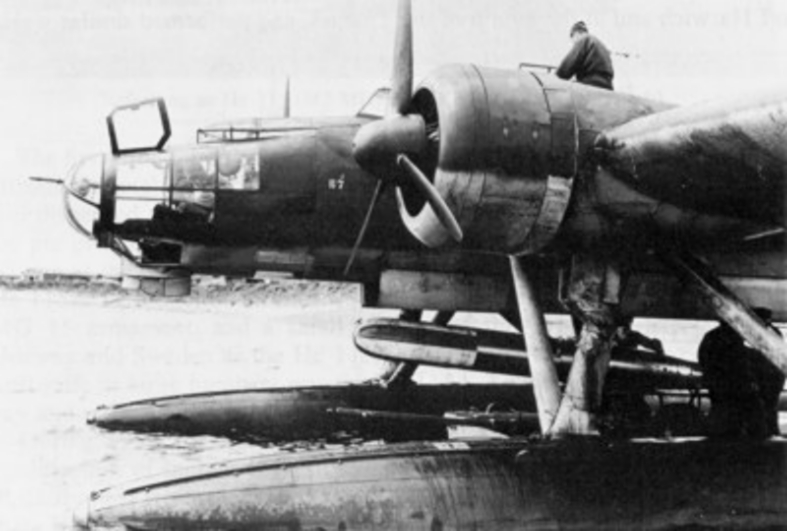 A torpedo – a direct copy of the Norwegian “Horten” air-dropped torpedo – being loaded onto a German HE115 torpedo bomber.

And of course, the biggest, baddest example; the lowly Poles, whose intelligence service was credited since the sixties with doing the groundwork that led to the breaking of the German “Enigma” code – and, as we discovered since the Cold War, did more than that.

Here’s one of those stories.

Hit ‘Em Where They Ain’t…Yet:  The fact that air power became a decisive arena of conflict surprised nobody at the beginning of the war; since the end of World War I, air power theorists like the American Colonel Jimmy Doolittle and the British Air Marshal “Boom” Trenchard, among many others, had grabbed their various nations’ high commands’ attention and held onto it during the years leading up to the war.  Even the most humble, minor nations invested heavily, albeit not always wisely, in air power.

And the world’s armies and navies in turn invested heavily in the means to attempt to defend against aircraft.

Now – both of those cases assume one constant; the location of the guns that are doing the shooting, as would be the case with anti-aircraft guns on land.  On land, AAA guns sit in one, known spot to do their shooting.  Which makes the complex math just a little simpler.

Now – put an AAA gun on a ship, with not only it’s own speed and bearing to track, but the roll and pitch and yaw of wave action and the other forces acting on the vessel to compensate for – and the job of making a bullet or shell intersect with a plane, with its own elevation, angle, range, speed, heading and altitude – and the job just got intellectually herculean.

Think about it:  try skeet-shooting at ac clay pigeon whose launcher you can’t see and whose path you don’t know in advance – from a moving vehicle.

The US created a system that addressed the first, “Heavy” shipboard AAA scenario most effectively; we deployed the “Mark 37 Fire Director”. 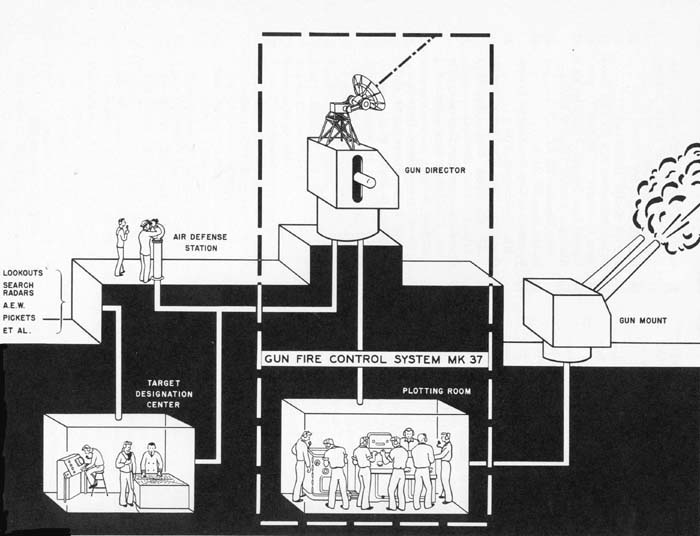 It linked optical sensers, and eventually radar, to an analog, electromechanical fire control computer that digested all the inputs – target elevation/bearing/altitude/heading/speed, ship speed/heading/roll/pitch/yaw, as well as temperature and humidity – and spit out the bearing and elevation for the guns, and settings for the guns’ fuses and precise firing cues for the guns, allowing the whole process to end in a plane-shattering kaboom somewhere close to the moving target.

It worked well; it’s was still in service, with updated radars and electronics, until very recently in the US Navy.

But for the problem of making light AAA – guns of 40mm or less, basically large machine guns – hit the target, the solution was more byzantine.

The first half came from Sweden.  Bofors Weapon Works invented a 40mm heavy machine gun that fired two two-pound shells a second to a range of about a mile.

A 40m Bofors gun – in this case, in Finland, although interchangeable with guns that served in the US, the UK, all of their allied powers, and even Germany.

It became the iconic anti-aircraft gun of the war; it’s still in service in some parts of the world; it’s immediate descendent is still one of the most popular guns of its type.   I its original, land-based form, it fired from a trailer that sat on jacks on the ground; its’ “fire control system” was a couple of optical sights and a pair of hand cranks to control vertical and horizontal training.

It’d take some work to make it a usable naval system.

It was a Dutch inventor, Walter Hazemeyer, who first developed a mounting that could fight effectively on shipboard.  He fitted a gyroscope and a set of servos to a twin-gun mounting, which effected “triaxial stabilization”; the gun would automatically be kept steady against side-to-side roll, lateral pitch, and horizontal yaw. And it was revolutionary; the Hazemeyer mountings serviced on Dutch naval vessels in the years before the war, and gave a fairly excellent account (which has been largely forgotten, given the speed with which the Dutch fleet collapsed).

A Hazemeyer mounting, with an early British radar, demonstrating stabilization with a pretty fair roll.

And the timing couldn’t have been better.  British ships – lacking the radar-guided heavy AAA of the American Mark 37 and a light AAA gun that had anything other than manual compensation to stabilize it – suffered terribly from close range air attack in the first year of the war.  The standard British light AAA gun, the “Pom-Pom”, had been invented nearly 40 years earlier, and was showing its age.  The alternative – the .50 caliber machine gun – was even worse; a lethal shredder in ground and air-to-air combat, it was useless as an anti-aircraft gun.

An octuple “pom-pom”, found on most British battleships and aircraft carriers, especially earlier in the war. The guns themselves dated from before 1910, and it was optically-trained, and threw itstwo-pound shell at relatively low velocity to a range of a little less than a mile. Still – this mounting would throw out sixteen shots a second, which was nothing to sneeze at in a torpedo bomber that was flying in a straight line at 150 knots…

In the immediate aftermath of the fall of Holland, a Dutch minesweeper, the Willem Van Der Zaan, limped into a British port with one of the few Hazemeyer mounts to survive in the European theater.  British (and, shortly, American) engineers swarmed over the mounting, reverse-engineering it and getting it into mass-production in record time.  The Brits teamed the gun with a “Type 282” radar – one of the first attempts at a fire control radar for light AAA.

The results were astounding.  Stabilized Hazemeyer mounts were 2-3 times as effective as the British “Pom Pom”, and similarly superior to the American gun of the day.  And as air threats ramped up later in the war, culminating in the Japanese Kamikaze offensive later in the war, there’s a fair case to be made that the Hazemeyer (and the improvements made on it in the US later in the war), installed in numbers that would have made pre-war naval architects blanche, along with the Mark 37 Heavy AAA controller, allowed the US and British fleets to survive.

An American quadruple 40mm mount. The product of both endless American tinkering with the original Hazemeyer concept, and of the desperate need to increase the amount of light AAA against the rapidly expanding air threat by 1944, this gun mount survived in US service well into the 1980s.

Including, I’ll add, my ex-father-in-law, who was the gun captain of what was essentially a second-generation Hazemeyer mounted-twin Bofors gun in the Pacific – a Swedish gun with Dutch fire control system and British-designed radar – and who bagged a couple of Japanese planes himself.

3 thoughts on “Not Invented Here”