“Military Intelligence” is a both a sarcastic rejoinder about the meatheadedness of bureaucracy and a fairly smug standup comic’s conceit.  This past week, the assault on Obama Bin Laden after fifteen years showed the end result of intelligence work.

Of course, intelligence is rarely that spectacular, even in terms of end results.

Mostly, intelligence work involves thousands of hours of mind-numbing tedium trying to learn what ones opponent is doing, either in general in peacetime or in very specific terms in time of conflict.  It covers everything from listening to and decoding and translating millions of hours of radio transmissions, to compiling intercepts and triangulations of enemy’s radar and radio transmissions, to poring over photographs from satellite, reconaissance aircxraft, submarines and drones to figure out opponents’ numbers, equipment and intentions, to getting information from agents or reports from the battlefield and, most importantly, piecing information from all these sources together to form at least an educated guess as to what your opponent is doing, or planning to do.

The ultimate dream of every intelligence service? To be able to listen in on ones’ enemy’s most secret communications, and thereby know what he’s doing as soon as he does.

It is a dream, for the most part.  Almost invariably, the best your intelligence can do is piece together external signs into an educated guess.

But every once in a while the intelligence officer gets a lucky break.

Seventy years ago today was one of them.

On the opposite side of the intelligence fact-gatherer is the array of people whose job it is to keep secrets from their enemies; from the soldier wearing camoulage, to the counterintelligence operator looking for signs of the enemy’s prying eyes with the aim of co-opting or neutralizing them, to the cryptographers inventing complex codes to try to stay several jumps ahead of the enemy’s cryptoanalysts decoding efforts and, in this case, the engineers who develop the machinery to make the job sustainable, fast and error-proof.

It was in 1918 that a German engineer, Arthur Scherbius, patented the first version of what would be the German solution to that problem during World War II – a machine that would become known as “Enigma”, and would be the result of an intelligence campaign that not only changed the course of the war, but led to developments that frame the entire Information Age.

This guy explains it pretty well; three rotors, each containing 26 embedded wires – one for each letter of the alphabet – performed simple ciphering of letters; if you pressed the “G” key, run through one rotor, might become a “W”.  Filtered through two more rotors, a “reflector”, and then back through all three, meant the initial character would be changed a total of seven times between the click of the key and the lighting of the lamp that gave the final results.  Then, after each character, the third rotor would rotate to its next position, meaning that the code cipher changed with every key stroke.  Every day, the combination of rotors and rotor starting positions was changed according to code books published by the various armed services; the first few characters of each message, already encoded, would tell the recipient (who had set the rotors to the same initial setting, per the code book) which further initial setting to use for each of the wheels, in theory making the system even more secure.

The Poles, as befits a nation surrounded by mortal enemies who bore it no good will, had developed a crackerjack intelligence service (much as Israel has throughout its existence).  In the mid to late Thirties, mathematician and cryptologist Jerzy Różycki working for Polish Intel’s Biuro Szyfrów (Cypher Burearu) began working out the mathematical methodology to at least start figuring out the initial cypher-wheel setting.

It was a start.

But the codes didn’t stay static.  The early Polish discoveries were eventually rendered obsolete by developments in the Enigma machine, and with their secure coding procedures.

Britain, too – with its long history in cryptography – recognized the importance of code-breaking in general, and Enigma in particular.  British Intelligence – MI6 – gathered the Polish refugees after Poland and France fell, and set up shop at the cold, barren estate of Bletchley Park.

And in one of the most intense frenzies of advanced pure applied mathematics ever put to solving a practical problem, the Brits began tackling the theoretical aspects of decoding messages intercepted from Enigma.

But it’d help ever so much to get hold of a machine.

A German U-Boat, “U110”, had set off on March 1, 1941 on its second war patrol, under Kapitänleutnant Fritz-Julius Lemp, who’d commanded the boat ever had since its commissioning the previous November.   Lemp was an experienced U-boat commander; while commanding U30, he sank the first Allied vessel to fall to a U-Boat in the war, the passenger liner SS Athenia.   U-110 was his second command.

U110. It was a sister-ship of the U505, which is on permanent display at the Museum of Science and Industry in Chicago.

Lemp sank two merchant ships that day, approaching submerged and firing torpedos.  But on his last approach, he left his periscope up too long.  Accounts vary; one said Lemp was distracted by a malfunctioning torpedo, while another says he lingered to confirm a kill, without sweeping the horizon…

…to note that HMS Aubretia had sighted the periscope and was closing in.

HMS Aubretia. A "Flower" class corvette, basically a converted fishing trawler, it was one of hundreds of slow, dumpy but seaworthy ships of the class that tried to guard convoys from the depredations of the U-boats.

U110 dove fast – but Aubretia bracketed the submarine with a spread of depth charges which rattled the crew and popped valves open and, more importantly, gave Aubretia a firm sonar fix on the submarine.   Two more British destroyers – HMS Bulldog and HMS Broadway – closed in to help.

HMS Bulldog. Commissioned in 1931, it was an old ship that largely served on convoy escort duty thoughout the war.

Bulldog captured the sub on sonar, and dropped 15 depth charges.  Broadway closed in and did the same. 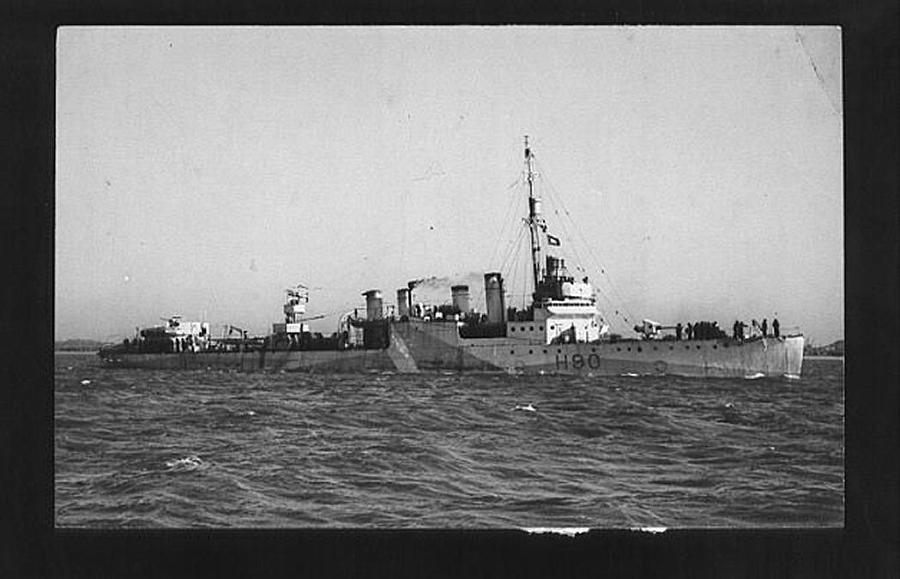 HMS Broadway. Formerly the USS Hunt, commissioned in World War One, it was one of the 50 overaged destroyers lent to the Royal Navy in exchange for bases in the Azores in 1940. It was a sister ship of the USS Ward which, with its crew of Minnesota navy reservists, will be a subject of a post in about seven months.

The depth charge attack did more than rattle the crew of the U110.  The power cut out, sprung valves started flooding the engine room, and Lemp decided to surface – if he could.  Compressed air valves were open, blowing water from the ballast tanks.   The boat made it to the surface, and Lemp ordered “Last stop, everyone off” – slang, it seems, for “Abandon Ship”.

The crew swarmed out the conning tower hatch. The crew of Bulldog initially thought the crew was coming up to turn its deck gun on the British destroyer – a last-ditch affair that could still be deadly at close range – so his machine guns opened fire as Bulldog’s commander, CMDR JOe Baker-Cresswell, ordered the destroyer to ram the sub, killing a few German sailors before it became obvious they were abandoning ship.

Lemp, for his part, had ordered all the ballast tank vents and hatches left open – and, seeing Bulldog closing to ram, figured his ship, and its secrets, including the ultra-secret Enigma machine, would soon be 8,000 feet below at the bottom of the Atlantic.  His crew took to the water…

…as Baker-Cresswell decided it might be worth trying to capture the boat.  Bulldog veered aside, missing the stricken sub and ordering a boarding party led by Sub-Lieutenant David Balme, to get ready in the destroyer’s whaleboat.

What happened next is controversial; Lemp apparently realized his mistake, and started swimming back to the boat.  Accounts vary; some said he was shot by a British sailor, while others say he drowned while swimming.    Aubretia, Bulldog and Broadway picked up 31 survivors, about 2/3 of the boat’s crew.

At any rate, Balme’s crew reached the boat, and took hours to pilfer everything worth taking – including the Enigma and the boat’s entire supply of code books.

Sub-Lieutenant Balme's team rigging U110 for towing. The boat is down by the stern, due both to filling ballast tanks and flooding in the engine room due to the depth charging.

Hearing the tightly-controlled news, MI6 realised the coup the RN had pulled off – and how quickly the Germans would change their codes if they knew that U110 had fallen, intact, into British hands.  So Bulldog, which had been towing the boat to England, was ordered to quietly let it sink.

And the secret stayed put.  MI6 was able to use the captured machine and code books to complete their breaking of the Enigma codes.  For the rest of the war, “Ultra” – the mega-secret British code-breaking team at Bletchley – was able to read German communications at the highest levels in almost real time. German leaders, thinking they were sending messages in complete security, would communicate freely via Enigma – and Allied commanders would often have the messages nearly as fast as their German counterparts.

It was estimated that the complete cracking of Enigma shortened the war in Europe by two to four years.

Or at least that was the public story.  Like so many things in the world of intelligence, the public perception of how things actually went down has been carefully manicured over the years, to throw the enemy du jour off the scent of what the various intelligence services, friend and foe, really know.

Because while most of the public history of Enigma, Ultra and so forth were written in the fifties and sixties and seventies, when MI6 decided to release a story, focused heavily on the events of seventy years ago today, the fact was that as early as 1932, the Poles were breaking Enigma codes (although it didn’t become public knowledge until the nineties), with the help of French Intelligence, which managed to steal a copy of an early German code book and deliver it to their Polish allies.  By 1937, the Poles estimated they were breaking 3/4 of Germany’s general staff Enigma-encrypted radio traffic – and with adequate staff (it was incredibly labor-intensive work), they could have gotten 90%.  Polish Intelligence knew almost as much about Germany’s plan to invade Poland as the Germans did.

Which is not to underestimate the importance of the capture of the U110 seventy years ago today.  It’s always better to have a working model – at the very least, to validate the incredibly complex mathematical models that went into the theoretical solutions.

But let’s go back to the whole “labor intensive” bit.

In order to help process the masses of information  that the complete cracking of Enigma unlocked, and to assist in cracking the rotor settings of German messages, one of the British codebreakers, Alan Turing, developed techniques – the logical “bombe” algorithm and the theoretical “Turing Machine” – which contributed to the eventual architecture of the digital computer.

And the first digital computers, developed at the end of World War 2, were largely developed to help support codebreaking efforts.

Seventy years ago today, the stuff of what was then science fiction crashed into very real life in the icy North Atlantic.

12 thoughts on “For Want Of A Secret”