It’s hard for us, today, to picture what the world was like seventy years ago.

The Nazis march into Paris.

For the better part of a decade, much of the world’s intelligentsia actively wondered if democracy’s day had come and gone.  Various flavors of totalitarianism – whose ghastly crimes against humanity had been hidden from the world by a compliant media – had their adherents and even admirers in the West; Hitler and Stalin had both won Time’s “Man of the Year” award – making trains run on time impressed journalists then no less than now.

Here in Minnesota, as in much of the US heartland, the demoralization of the thirties led to a splintered worldview; the Minnesota Democratic Farmer/Labor party was cozied up to Stalin (and would stay that way until Hubert H. Humphrey, in one of his great contributions to the integrity of American politics, tossed the reds from the party six years later), to the point where it opposed war with Germany, with whom Stalin was then allied via the Molotov/Ribbentrop Pact.  In the meantime, the upper Midwest was a haven for the Deutsche-Amerikanische Bund, which favored rapprochement with the Nazis. 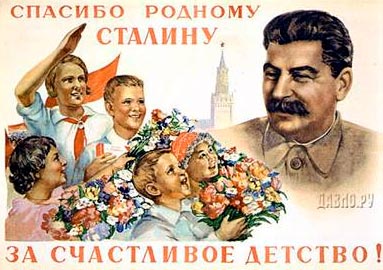 Stalin, from a Gus Hall fan site. Gus Hall was from Minnesota. The poster says “Happy To Pay For A Better Smolensk”.

Worse?  The totalitarians had just spent four years showing that their supporters in the West might have a point.  They conquered Spain.  Naziism dragged Germany out of the Great Depression (which had started ten years earlier in Germany than the rest of the west) well ahead of the rest of Europe or the US.  By all appearances, the Soviets were doing quite well too.

Poster for Nazi “Kraft Durch Freude” (Strength Through Joy) movement. Remind you of any recent City Pages ads? Me too

And World War II seemed to be the final nail.  Germany had swallowed up Austria and Czechoslovakia without a struggle; Poland, Norway, Denmark, Belgium, the Netherlands, Luxembourg and, finally, France – theretofore Europe’s greatest military power – all fell in dazzlingly short order, sending the Brits reeling across the Channel.  Britain had beaten back the Luftwaffe the previous summer, but everyone expected Hitler to get ready for another invasion attempt in the spring; his U-boat campaign to starve Britain into submission looked, to insiders, to have a great chance of doing just that.

The Japanese also were going great guns, as well as rolling up vast swathes of China before their military juggernaut.  State Shinto – a pseudoreligion not a whole lot different than Naziism in its own way – seemed a viable option to many as well.

And everyone expected war between the US and Japan, and probably Germany and Italy as well.  It was a year away – but the buildup to war had already begun; Roosevelt had instituted the draft and called up great swathes of the National Guard already.

And so even though the world hadn’t fallen off the cliff into complete cataclysm – Germany wouldn’t invade the USSR for another eight months – everyone knew that the world was a horribly bleak place on December 8, 1940.  And nowhere was it bleaker than for the world’s democracies.  There were those that thought the classical American notion of liberty was on its last legs.

To say nothing of America itself.  As the fascist wave crested, the Nazi and Fascist and State Shinto leaders arrogantly looked at America, demoralized by a decade of depression and softened by the decadence of its “refrigerators” and “telephones” and “movies” and “vaudville”, and thought that America would love its prosperity too much to fight for others’ liberty – or even defend its own.

The “experts” around the world counted America out.

It was the day of the eighth playing of the 1940 NFL Championship.    And the Washington Redskins were the prohibitive, odds-on favorite of the same media and punditry that had applauded Mussolini, who lauded and feted Hitler and Lenin, who’d uncritically published and eaten up Walter Duranty’s mash notes to Joseph Stalin.

Against them stood the Chicago Bears.  The Bears had been a dynasty in the thirties, but it was a new, harrowing decade, and, like Darth Vader swallowing up the Republic, things in the NFL had changed as badly for the worse as they had in every other part of the world.  The Redskins, led by Sammy Baugh, seemed to tower invincibly over the plucky Bears, like Dolph Lundgren over Sylvester Stallone. 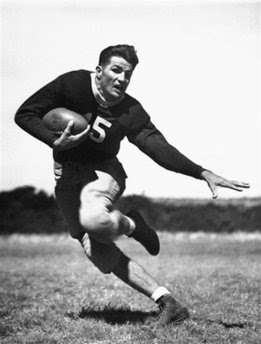 The Skins had beaten the Bears 7-3 three weeks earlier, toward the end of the regular season.  As the teams headed toward the championship, at Griffith Stadium in DC, the Skins’ owner, George Preston Marshall, told the media (who else?) that the Bears were quitters and crybabies – exactly as Hitler was telling his minions about America, halfway around the world.

The “experts” said so.

The Bears brought some of the same things to the table that America itself did, though.  Indeed, the juxtaposition should escape nobody; the Skins, led by the German-descended Baugh [*], faced the Bears, as polyglot a bunch of Yanks as the squad in any World War II war movie – with names like Musso, Osmanski, Clark, Stydahar, Macafee, Maniaci, Kavanaugh –  led by Brooklyn-born Sid Luckman, the son of pogrom refugees, and perhaps the greatest Jewish quarterback in the history of pro football. 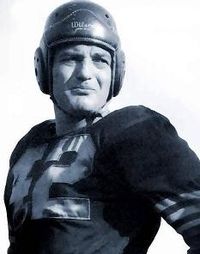 And the Bears were at the forefront of a change in tactics; they ran from the “T Formation”, allowing greater flexibility compared with the ‘Skins’ single-wing formation – especially for Luckman, who’d become known by the end of his 12 year career as the NFL’s first great long-ball passer, even as under the bleachers at the nearly University of Chicago, other Jewish refugees were revolutionizing warfare forever as they carried off the first nuclear fission reaction.

The Bears, like America itself, brought a love of the underdog, and not a little bit of good ol’-fashioned America ingenuity and improvization skill.

And so that morning, inflamed by Marshall’s arrogance just as their forebears had been enraged by Santa Anna’s brutality at the Alamo, the Bears took the field, and took the game directly to the Redskins, like the RAF’s Spitfires and Hurricanes tearing into the Luftwaffe’s bombers.

And like the RAF – and like the US Navy would do a Midway a year and a half later, and the US Army would do at Omaha Beach in three and a half years, and in the Bulge in a little over four years – the Bears, against all odds, not only prevailed…

…but kicked the favorites’ asses.

The “weak”, “crybaby” underdogs prevailed against the favorites.

Just as America itself did, five years later.

Would it have happened without The Bears’ epic victory, 70 years ago today?

But it’s worth observing that, as America’s fortunes waxed during the war years, so did those of The Bears, who won championships in 1941, the pivotal year 1943 and then again in 1946, setting up the successful reconstruction of Europe.

The point being that the fortunes of America the nation, the shining city and the great experiment are inextricably intertwined with those other palimpsests of all that is great about America, the Bears and conservative exceptionalism.

It was in 1963 when our nation – a month past the murder of its beloved, patriotic president – needed strength.  And the Bears, led by Bill Wade and the first of many great Bears linebacking threesomes (Joe Fortunato, Bill George, and Larry Morris), gave it to them with another come-from-underdog win against the New York Giants, featuring airtight defense and an appearance by a young Polish-American tight end, Mike Ditka, upsetting the Giants and putting a comforting coda on the end of a horrible chapter in American history.  Americans could to go bed that night knowing that all was well.

Of course, the Bears’ fortunes ebbed for the next twenty-two years – as did those of conservatism, and of America itself.  And the nation’s fortunes, as always, reflected that waning.  The drought years of the sixties and seventies coincided with the epic droughts in the rest of American society; the Bears, America and the GOP reached their nadirs, with  the fall of Saigon, Abe Gibron’s years as head coach, the WIN button, Stagflation, Watergate, Desert 1 – simultaneously.

And yet three great Americans rose from the ashes during this time, laying the groundwork for a resurgence; Walter Payton, and Republicans Ronald Reagan and Mike Ditka.  Payton led the Bears out of the Wilderness just as surely as Reagan led America. 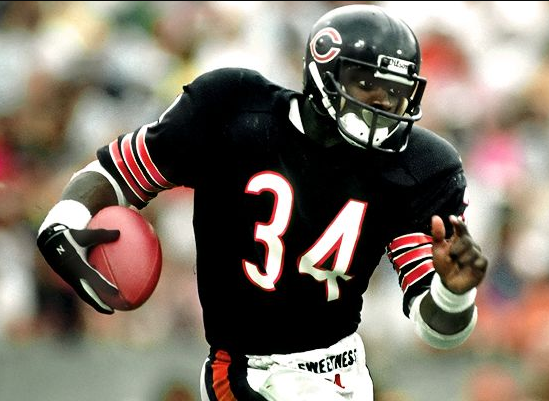 …Ditka. When America needed all three, they were there.

And in 1986, at the depths of the Cold War, when once again “the experts” united to claim that America had seen its best days and the “nuclear clock” was supposedly ticking down as remorselessly as the timer in “24”, and that the USSR and the Patriots might well be viable and unstoppable in the modern world, Ditka (mirroring the rise of that other great Pole, Walesa) and Reagan and Payton rose up, leading other great Americans, Singletery and Weinberger, Dent and Schultz, Kirkpatrick and McMahon, and against all odds scored epic victories for freedom at the 1986 Super Bowl and the Rejkjavik talks, both leading in their way to the fall of the Berlin Wall and the collapse of communism and, finally, the re-ascendancy of Western Civilization.

But history didn’t end in 1990.  The Bears, like freedom itself, choked in 2006, against the Democrats and the Clots, leading directly to the defeats of 2008.

And after those dismal seasons, there were those that said the Bears and Real America would need years of rebuilding to be contenders again – if, indeed, either could do it at all.  That The Bears, like conservatism itself, were relics of a past unlamented by the likes of pundits Keith Olberman and Ed Schultz, or sportscasters Ed Schultz and Keith Olberman.

But when America, and Western Civilization, need to be saved, then the true heroes who walk among us will step up;   The Bears unpredictably have been rising out of nowhere to shock the league; the Mama Grizzlies, likewise, rose from nowhere to shock the political world.

On the other hand – we owe it to posterity to see that all of them do win.

But on the field as in and about the land, there is hope.  For conservatism is rising, and the Bears are contending, and for now there is hope.

Today, as seventy years ago today, you can thank God, Guns, Guts, and the Bears.

[*] Yeah, I stretched that metaphor too far.  Baugh was a great American, and was named “The most versatile player in NFL History” by the NFL network.  Luckman, for his part, served in the wartime Merchant Marine, playing in odd spare Sundays with the Bears.