By the beginning of September in 1915, Europe had been at war for over a year – a year of bloodshed and loss for the Entente.

The Western Powers of the Entente were locked in the static horror of the trenches.  The Russians were slowly losing their eastern European empire, en route to losing 2 million men in 1915 alone.  And the British were desperately throwing themselves against the Dardanelles while already contemplating a humiliating retreat.  Yet despite their victories, the Central Powers seemed no closer to ending the war than the Entente.  For both sides, their visions of victory – yet alone their rationales for fighting – were sinking into a murky morass of blood and mud.

But in the small village of Zimmerwald, Switzerland, a vision for the end of the war was beginning to form – a vision of revolution.

The Revolutionary in Obscurity – Vladimir Illyich Ulyanov in Switzerland in 1914

From September 5th to 8th, 1915 in Zimmerwald, Switzerland, the Great War was reduced to a war of words.  The combatants were not heads of state, military leaders, or even prominent civic leaders.  Rather, the attendees were there precisely because they lacked any real role among the warring governments.

What would become the First International Socialist Conference (or simply the Zimmerwald Conference) started by underscoring the relative weakness of the various socialist movements of Europe.  Many nations had no representatives and those countries that did often represented fractured organizations.  The war had divided Europe’s socialists from the opening salvos.  Nations like Italy typified the socialist confusion about an appropriate response as some prominent socialists like Benito Mussolini argued for participation in the conflict.  Indeed, most “mainstream” socialist movements had ended up supporting their own national government’s position on the war by the start of 1915.

For the anti-war socialist movements that remained, the path forward seemed as unsure as it was for the Central Powers or Entente.  Most of the Conference’s attendees wanted to organize popular resistance to the conflict in the belief that enough marches and demonstrations would force the warring powers to the peace table.  But one Russian delegate passionately dissented in favor of violent revolution – Vladimir Ilyich Ulyanov.

Although all of Europe was experiencing various levels of hunger, it was pronounced in Russia and Germany.  Here is an artist’s depiction of a Russian food riot

For nearly fifteen years, Ulyanov had written various pro-Marxist newsletters and manifestos under the pen name of Lenin.  And for most of those nearly 15 years, Lenin had been on the outside of the Russian socialist movement, both literally and figuratively.  A member of the Russian Social-Democratic Labor Party, Lenin and his supporters had lost key votes on leadership within the party to fellow revolutionary Julius Martov in 1903, causing a split within the Party between Martov’s Mensheviks (from the Russian word for “minority”) and Lenin’s Bolsheviks (from the Russian word for “majority”).  While many of the differences between the two movements appear idiosyncratic today, Martov and the Mensheviks were ultimately more willing to work within the limited democratic framework provided by the 1905 Russian Revolution, supporting the Constitutional Democrats of the country’s Duma.  For Lenin, it was total revolution or nothing.

For his views, both in the eyes of the Russian Social-Democratic Labour Party and the Tsarist authorities, Lenin would spend all but a couple of years between 1900 and 1916 outside of Russia.

For Lenin, the Great War should become a “Civil War” – a continental conflict between the bourgeoisie and aristocracy. This put Lenin at odds with the Conference’s more moderate socialists who were skeptical whether such a revolutionary movement could overcome the nationalist hatreds then dividing Europe.  Having already lost millions to death or injury, would ordinary soldiers really rise out of their trenches and fraternize with their enemies? Would civilians starving at home really welcome massive strikes that only increased their misery?  In short, why would anyone trade war on distant battlefields for war on their home streets?

Lenin shrugged off these concerns – the soldiers and civilians would come around when the time was right. As for civil war, there was no question that the revolution would be violent; the only question was whether the circumstances were favorable for it.  An opportunist first and last, he advocated watchful waiting and readiness to move: “For the present it is our task to jointly propagandize the correct tactics and leave it to events to indicate the tempo of the movement.”  He also urged the assembled delegates to combat rival ideologies that threatened to undermine socialist efforts to organize workers, especially anarchism. In Lenin’s mind, the revolution could and should start in his homeland, with the overthrow of Tsar Nicholas II.  Again, the Conference’s attendees disagreed.  The Russian proletariat (industrial working class) was small and Russia still didn’t have a liberal bourgeois government, two factors Karl Marx had supposedly identified as preconditions for a revolution.  The liberal democracies of the West, even perhaps some of the Central Powers, would be better targets, to the extent the delegates even agreed with Lenin’s violent vision of the future.

Despite Lenin having barely set foot in his homeland in years, he perhaps better understood the current plight of Russian society – and why the Empire was a ripe target for revolution.

Russia’s transition from an agricultural society to an industrial one had been fraught with complications well before the war had broken out.  Land reforms and the end of serfdom had pushed millions off of farms and into the cities, where crime, disease and starvation were already the orders of the day.  Now with millions of men under arms (47% of the nation’s able-bodied men would eventually be conscripted by 1917), and unable to plant and harvest crops, Russia was slowly starving to death. 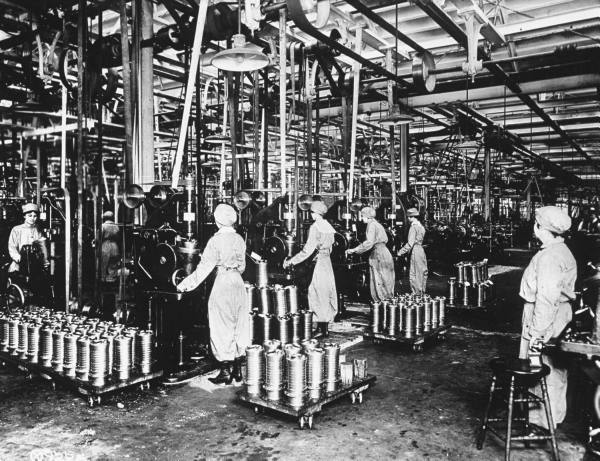 The Russian populace, now forced to wait an average of 40 hours a week in line just for wildly overpriced food, reached its breaking point.  Just a month before the Zimmerwald Conference on August 7, 1915, in Kolpino, an industrial suburb of Petrograd, a major food riot had occurred.

Female shoppers, mainly workers’ and soldiers’ wives, were outraged at escalating prices, and their audience with the manager of a local factory led only to empty promises. Dissatisfied with the outcome, the women took direct action, going about the city and forcibly closing shops.  About two thousand men joined them when their shift ended, and at that point the crowd became genuinely violent.  Members of the crowd attacked the shops and threw stones when police tried to restrain them.  When the riot finally came to an end around 10pm that same evening, fifteen shops had been wrecked, their contents stolen or destroyed.

The scene in Kolpino was replayed in multiple other cities.  Some blamed bureaucrats, or shop keepers, others blamed the German-born Tsaritsa.  But when the wives of soldiers in the Don region rebelled over food prices, they tore down a portrait of the Tsar.  Having smashed the frame and thrown the Tsar’s portrait on the floor, they stomped on it and shouted, “Trample him; he’s taken our husbands off to war.” One of the women jumped up on the counter and, breaking the glass of a portrait of the Empress that hung on the wall, cried out, “The Empress is innocent, but the Tsar has taken our husbands. Trample him!” Anti-Tsar protests in Petrograd. The photo is actually from 1917, but such frustration had been fermenting for long before the war

Marx’s preconditions or not, Russia was simmering with revolt.

Few would have foreseen any impact coming out of the end of the Zimmerwald Conference.

But the Conference caught the eyes of other revolutionaries – and German intelligence.

Lenin in Russia – in 1917. The radical’s return was still nearly two years away, but German authorities believed Lenin could help drive the post-Tsar Russian government out of the war

In September of 1915 an Estonian revolutionary named Alexander Kesküla met with the German consul in Berne, Count von Romberg, and urged German intelligence to shift their support from the Mensheviks to Lenin’s Bolsheviks.  Romberg passed along Kesküla’s advice to Berlin, and gave him 10,000 marks to pass along discreetly.

For the moment, the German authorities were cynically referring to Lenin as a “bacillus” who would “infect” Russia and thus incapacitate a major military adversary.  In two years’ time, the infection would start it’s journey towards killing its host when the Germans would transport Lenin into Russia.

3 thoughts on “The Strain”