Within the forts sat 40,000 Ottoman soldiers; a mix of veterans from the Caucasus campaigns of early 1915 and young recruits.  Behind them sat another nearly 90,000 Ottoman troops of the massive Third Army.  Nestled in the safety of one of the most complex defensive systems in the world, and surrounded by snow banks as high as four feet in some places, the last thing the Ottomans worried about on January 10th, 1916 was a Russian attack.

A month later, Erzurum would be in Russian hands and 15,000 Turks had been left behind. 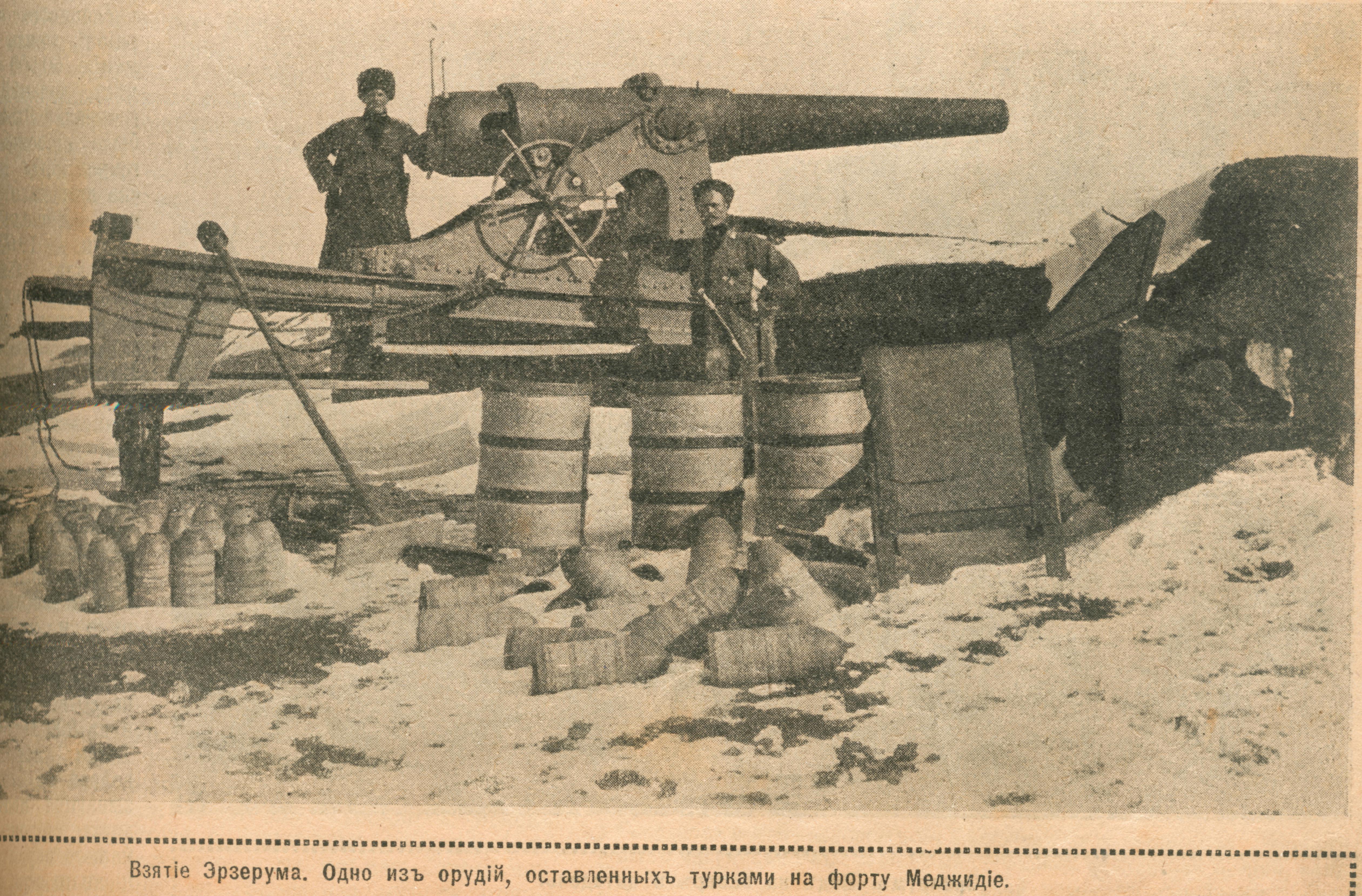 At the beginning of 1916, the confidence of the Ottoman army was high and growing higher.  After starting the Great War with a failed offensive against the Suez Canal, and a debacle against the Russians in the Caucasus, the fortunes of the 600-year old empire had markedly improved.  They had won tremendous victories against the British in Gallipoli and Mesopotamia, and were in the process of capturing an entire British/Indian army at Kut.

Only in the Caucasus had the Ottomans failed to seize the momentum.  Their abortive invasion of Persia and subsequent repression against their Armenian population had backfired.  Armenian cossacks raided the Ottoman supply chain and the conversion of Armenian-Ottoman troops to labor battalions, as they could no longer be trusted to fight, robbed the front of thousands of available soldiers.  But the rest of the Ottoman army’s morale was unmoved.  Since the battles of early 1915, an Elysium peace had descended at Erzurum – just far enough removed from the Russians or the Armenian rebels that had plagued the front.  Once the winter storms that blocked so many of the natural paths through the mountains had cleared, they might even be able to go back on the offensive. 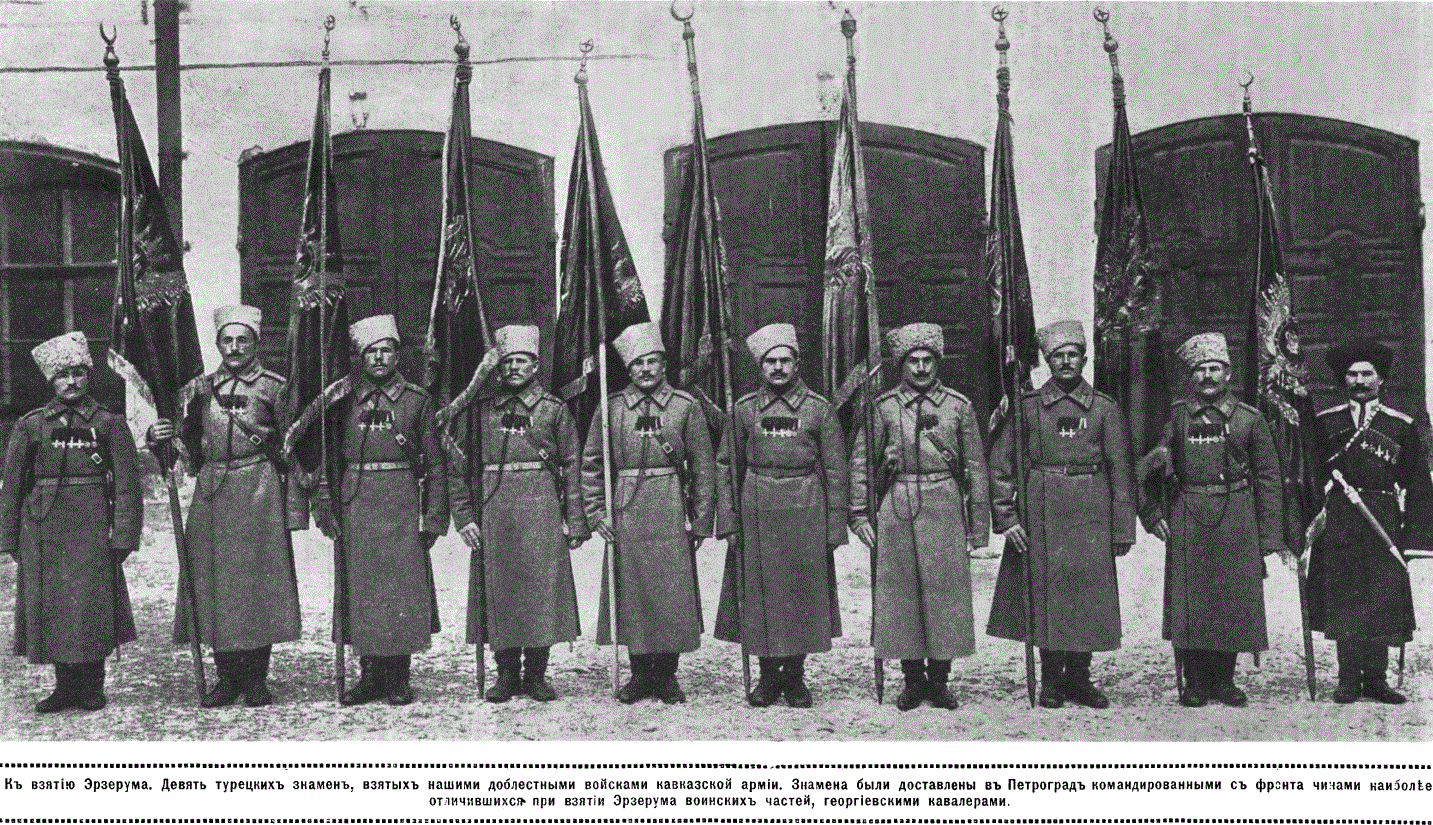 For the Russians, the reverse was true – the Caucasus had been the only front on which they were winning.  The battering of their armies on the Eastern Front, culminating in the so-called “Great Retreat” that left 2.8 million Russians either dead or prisoners of war, had devastated their war effort.  The Russian commander-in-chief, Grand Duke Nikolay Nikolayevich, had been replaced by Tsar Nicholas II himself, and worse for the Russian troops in the Caucasus, the Grand Duke was given the pity assignment of managing the empire’s war against the Turks.

On paper, the Caucasus front had all the ingredients of another humiliating – and costly – Russian defeat.

Where the match-up of forces, and the harsh winter elements, suggested caution, Gen. Nikolai Yudenich saw an opportunity.

In an army that was still adapting to the concept of meritocracy, Nikolai Yudenich would have been a poster child for the sort of commanders Tsarist Russia would want to promote.  The child of low-level bureaucrats, Yudenich had ascended the ranks through service and achievement.  In the Russo-Japanese War, Yudenich was seriously wounded – twice – and led Russian units with distinction.  Already in the Great War, Yudenich had won internal acclaim as the Chief of Staff of the Russian Caucasus and was the commanding general at the Russian victory at Sarikamish.  Best of all for the men he commanded, Grand Duke Nikolay Nikolayevich gave Yudenich a free hand to lead as he saw fit.  Even if he didn’t have it himself, the Grand Duke knew military talent when he saw it.

As Yudenich saw it, the Russians had a narrow window to strike the Ottomans.  The Entente defeat at Gallipoli would inevitably bring thousands of new Turkish troops to the Caucasus region and shift the balance of power.  And, thanks to so many sympathetic Armenian spies on the ground at Erzurum, Yudenich knew that most of the guns at the main fortress were older and not in good condition.  The best equipment, and the best men, had been moved to Gallipoli when it looked like that operation might determine the fate of the empire.

Erzurum before it fell.  Ottoman supply units line up waiting to move

Meanwhile, the Russians held the numerical and technological advantage.  Over 300,000 men and cavalry units were at Yudenich’s disposal.  Coupled with 150 trucks and 20 planes (both luxuries in the Russian army), Yudenich had the superior force and greater mobility.  He planned on using both in his upcoming offensive.

On January 10th, 1916, the Russian army struck at the weakest Ottoman army corps in the Caucasus.  The Turkish XI Corps was in poor supply and awaiting reinforcements in the middle of the brutal winter when the attack commenced.  But Yudenich wouldn’t be satisfied with immediately crushing the XI Corps – he wanted to lure them into a trap.

Yudenich fed his men into the offensive in a piecemeal fashion, allowing the XI Corps to feel emboldened about their chances.  After three days of turning back the Russian attack, the XI Corps sent in their reverses to finish the job.  In return, Yudenich unleashed 11,000 troops, having drawn the Ottomans out of their defensive positions in the belief they were about to send the Russians reeling.  The XI Corps was destroyed.

Erzurum under siege. The civilian casualty figures for the Russian invasion of the city are unknown

The Russians immediately pressed their attack, turning to find the headquarters of the entire Ottoman Third Army which had only recently settled in their position.  The headquarters fled in confusion.  The Turkish Third Army commander, on rest in Constantinople, rushed back to find his army in disarray.  It seemed that Yudenich could almost anticipate where the Ottomans were located and what they would do next.

In part, he could.  Russian planes easily scouted the countryside, having complete control of the skies and acted as Yudenich’s eyes across the vast battlefield.  Coupled with the strong Armenian intelligence network on the ground, Yudenich knew when Turkish units were on the move and where they were going.  The use of trucks meant Russian forces could quickly flank their opponents, even in the heavy snow.  Nor did it hurt that the Turkish response to the offensive had been predictable.  When pressed, Turkish troops retreated in the direction of Erzurum. While Erzurum isn’t a battle most know about in the West, it’s celebrated in Russia to this day. This is a 2014 Russian stamp with a reproduction of the Russian troops posing with the Ottoman artillery

After four major engagements and a month of fighting, Erzurum was in the sights of Russian gunners.  Nervous that a siege would benefit the Turks, and worried what a frontal assault might do to his men, Yudenich launched a series of diversionary attacks against the fortress by trying to take the surrounding heights and forts of the city.  The diversion worked – the Ottoman reserves threw themselves against the advancing Russians in a desperate attempt to prevent the Russians from taking the high ground.  Had they stayed in place, the Turks probably could defended part of the fortress until reinforcements arrived.  Instead, they thinned their already porous ranks, just as Yudenich had hoped.

By February 16th, Erzurum was in the dominion of the Tsar.  The Turks had lost 10,000 men as casualties, and another 5,000 as prisoners.  Nine Turkish battle standards, and 327 guns, joined in the haul.  In a time of few victories for the Entente, and even fewer for Russia, the victory at Erzurum was cause for a massive celebration.

Not only had Yudenich won the day, but he had done so in a manner that few Russian commanders had achieved – with fewer Russian losses.  Even in victories, the Russian casualty lists had been absurd and usually higher than their opponents.  At Erzurum, the Russians lost only 5,000 men. Erzurum aftermath – the city was also a major deportation center in the Armenian genocide.  The city would revert back to the Turks in 1918 as the Russians left the war, but not before Russian Armenian troops took their revenge against Muslim civilians of the city

The Russian offensive eventually stalled after the lengthy supply line necessary to equip Yudenich’s army had been stretched thin, but not before the crafty Russian general had taken a few more Turkish towns.  An Ottoman counterattack that spring, with 60,000 of the men from Gallipoli in the lead, failed spectacularly, with 25,000 casualties.  Fearing that the Russians might consolidate their gains in the Caucasus and press on to the Ottoman Anatolian heartand, the thankless job of commanding what men remained in the region fell to Mustafa Kemal – or Atatürk.  Kemal was given the assignment in August of 1916, just as the Russians and their Armenian volunteers were defeating the last of the Turks in Caucasia.

But these Russian victories were short lived.  A harsh winter in late 1916 ground operations to a halt.  And the social revolutions of the spring of 1917 ended offensive operations completely.  Yudenich was removed from command and given a backwater post in Central Asia.  He would temporarily retire, until the Russian revolution saw him cast his fate with the White Russians, gaining in prominence as he made diplomatic ties with the West.

But for a moment at Erzurum, it looked as though the Russian army – and with it, the Russian empire – might endure.