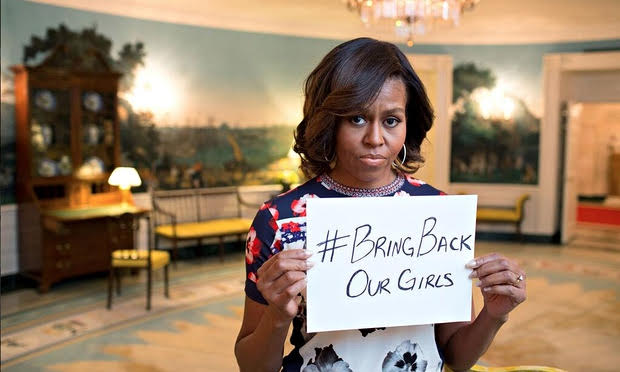 Boko Harum, a band of Muslim terrorists, kidnapped 300 Christian girls and sold them into sexual slavery, citing as justification an interpretation of the Koran that permits sexual relations with captured infidel women.  The kidnappers were not ashamed because they believed their actions were morally justified.  Mrs. Obama’s sign is an indicator of her abject cluelessness about the cause of the problem and the solution to prevent it in the future.
On New Year’s Eve, there were hundreds of groping incidents in European cities, some outright rapes, all reportedly committed by recent immigrants from North Africa/Middle East, men who are overwhelmingly Muslim and who believe infidel Nordic women who fail to cover their bodies are acting like whores just asking for sex.  So they got it.  What’s the problem?
Naturally, European women are outraged that Muslim men behave like Muslim men.  But what led Europe to this level of cluelessness?  People like this woman, protesting after New Year. 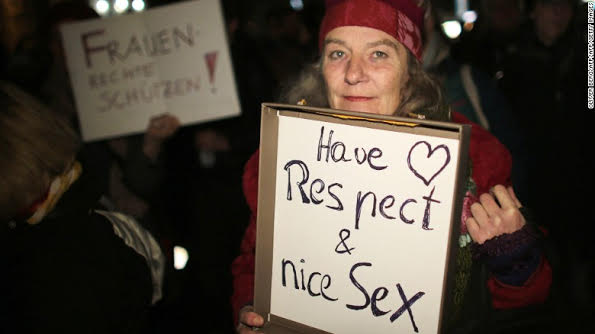 Wishful thinking, lady.  There won’t be any hard-body Arabs in your future, they’re after your daughter and granddaughter and there won’t be anything respectful about it.
But hey, they have a government to protect women from sexual assault, right?  So what’s the government recommend?  The Mayor of Koln tells women to stay arms’-length away from men you don’t know, travel in groups, and don’t drink to excess.  In other words, it’s not the rapists’ fault, ladies, it’s your own fault: you were acting like whores just asking for sex and you got it.
Okay, good to know.
Joe Doakes

We’ll be coming back to this article, later in the week, in re the “fantasy Islam” bit – a fantasy shared by Mark Dayton, Betsy Hodges, and a whole lot of otherwise well-meaining Minnesotans.