It was 70 years ago today, as US Marines were fighting the most brutal battle of their war, trying to eke out a foothold out on a tiny volcanic rock about one third the size of Manhattan named Iwo Jima – that five Marines and a navy medic raised an American flag atop Mount Suribachi, long extinct volcano.

As it happens, photographer Joe Rosenthal was there to record the image – one of the most iconic photographs of the 20th century: 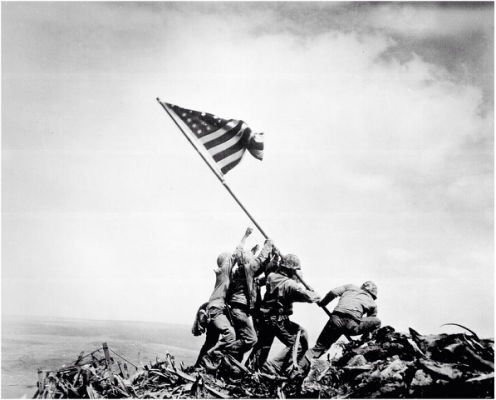 The story of that flag raising, and of the six Marines – three of whom were killed before the battle ended, over a month later – is pretty well-known.

Less well-known is the fact that it was the second such flag raising, a reenactment of an event that that had happened a few hours earlier. A small group of other Marines – including a young flamethrower operator from Linton North Dakota, Charles Lindberg – had tied a flag to a piece of scrap pipe and hoisted it atop the mountain earlier that morning. 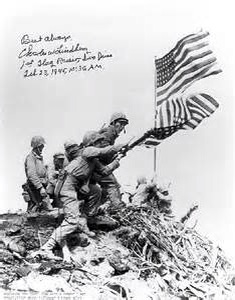 The flag was smaller, and less imposing, but no less a symbol to the Marines clinging to their foothold on the beach below.

Lindbergh wrote a book about his experiences in the early 1960s , which I read in high school. Lynberg moved to the Twin Cities not long after, and lived at his days as an electrician. David Strom interviewed him on his leg, great radio show about 10 years ago; one of my great regrets is not having gotten to interview him before he passed away.