If you only take one message away from this blog, it should be…

Well, it should be “Freedom is good and must be defended without reset, since tyranny never sleeps”.

But if you take another message from this blog, it’s…

But if you get three messages from this blog, number three should be “The Reverend Nancy Nord Bence and “Protect” Minnedsota have never, not once, made a statement about guns, gun rights, gun laws, gun crime, gun crime stats, gun rights groups, or the history, construction or meaning of the 2nd Amendment that is simultaneously substantial, original and true.

As such, it’s almost pointless to “fact-check: the Lying Reverend:  it’s like looking for damp spots in an aquarium.

But this particular social media excrescence deserves attention for its special level of depravity: 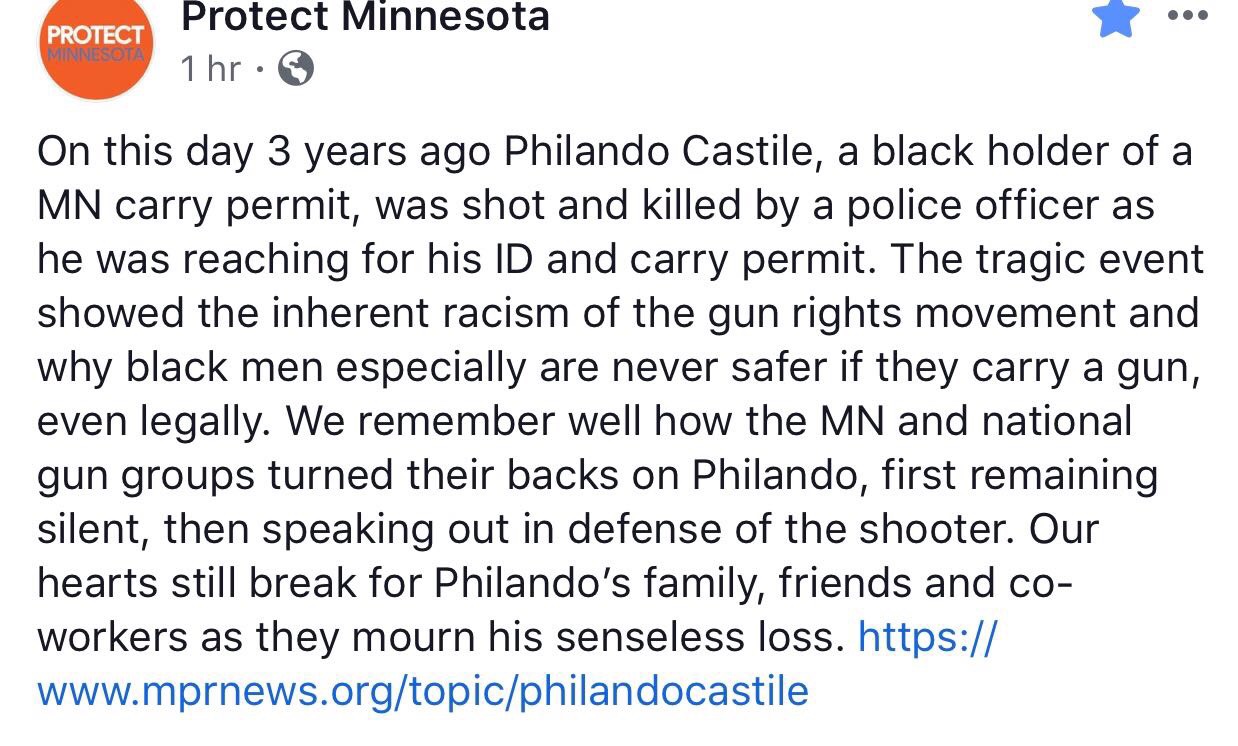 Take a moment to enjoy the battle between racism and illogic – if one is “never” safer with a gun (statistically untrue, but work with me here), how can some state be “Especially” never?  Infantilizing black people much?  And it’s not the gun that makes black carry permittees unsafe; in this case, it was the panicky cop.

Worse?  To the “Reverend” Nord Bence, while people with carry permits are hapless delusional morons, if they’re black, they are apparently even less competent.

But take your leave of that bit of frivolity for a moment, and note the record show that the MInnesota Gun Owners Caucus neither “remained silent” nor “defended” Officer Yanez – the Caucus was on the record and on TV defending our fellow law-abiding citizen before the “Reverend” Nord Bence knew the name of the guy she was stereotyping:

Castile did not say he had a permit, but he did say he had a gun. In general, that is what firearms instructors teach, according to Rob Doar, a leader of the Minnesota Gun Owners Caucus and a firearms safety instructor…“I recommend that you turn the car off, you turn the lights on in the vehicle, you keep your hands on the wheel,” Doar said. “I do believe that Philando Castile acted as a responsible permit holder.”

If is a given that if the “Reverend” Nord Bence says it, and it’s about anything to do with guns, presume it’s contemptuous bull***t.

The casual racism – while predicable from the lily-white turnout and lily-whiter locations of all “P”M events – s new.