On Wednesday August 9th, local gun control activist group Protect Minnesota published a statement on their Facebook page implying that the Minnesota Gun Owners Caucus has information on the attack at the Dar Al Farooq Mosque, and was withholding that information from the Federal Bureau of Investigation.

“We are outraged by these libelous, defamatory, and false accusations made by Protect Minnesota, “ said Bryan Strawser, Chair, Minnesota Gun Owners Caucus. “Our organization is committed to the defense of civil rights. This statement and its implications are baseless and offensive. Needless to say, we have no information on this tragic attack.”

“It’s truly unfortunate that at a time when we should be pulling together as a community to condemn terror, Protect Minnesota has chosen to engage in accusations that have no basis in fact and will only serve to distract investigators from swiftly bringing the perpetrator of this heinous act to justice.”

“Sadly, this approach has become the norm under their current leadership, “ added Rob Doar, Vice President & Political Director. “We always welcome thoughtful conversation on policy issues with any organization. Engaging in false accusations and misinformation following an incident of this magnitude is abhorrent. I sincerely hope that Protect Minnesota will cease this behavior and elevate their level of discourse.”

“We demand an immediate public retraction of these false assertions,” added Strawser.

Doar’s aside about “current leadership” is important:  while Heather Martens was a doddering incompetent, Nancy Nord Bence is a smug, passive-aggressive, entitled incompetent.

UPDATE:  No apology, naturally – but they’re trying to stuff their slander down the memory hole: 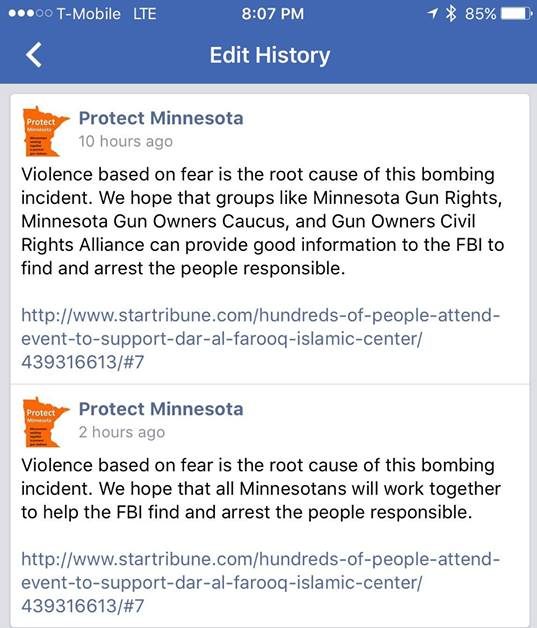 Well, aren’t they just a bunch  of profiles in courage?

They know their audience is neither curious nor critical enough to bother with the details.  But Nancy Nord Bence’s oompa-loompas are getting lazier and more reckless as they move out toward the extreme.  It’s eventually gonna cost ’em.

It’s already cost them their credibility.