I got this the other day: 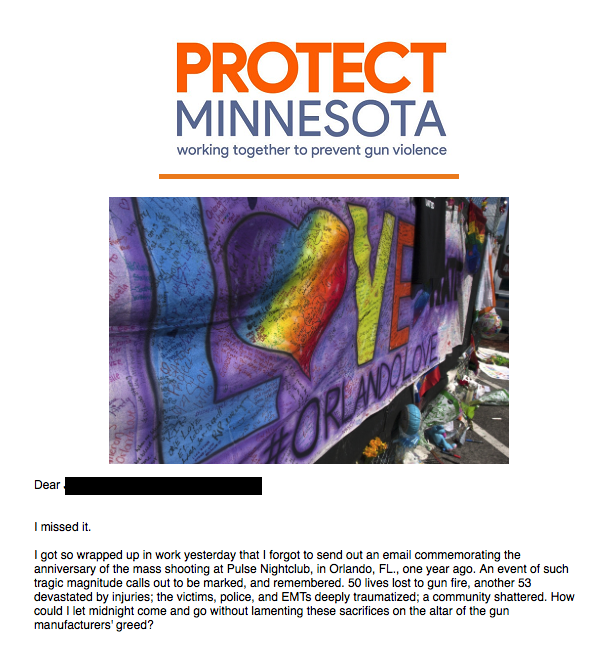 The first thing I thought was after reading this part:

I got so wrapped up in work yesterday that I forgot to send out an email commemorating the anniversary of the mass shooting at Pulse Nightclub, in Orlando, FL., one year ago.

Put another way:  “I’m such an incompetent tourist on this issue, I had to be reminded by my minions about one of the key parts of my job.

Which leads to the bigger question – what is this “Job” that the Reverend Nord Bence is supposed to be doing?

Any reference to perpetrators; every one of them a terrorist, a criminal, a  deeply mentally-ill person, often a narcissistic delusional bent on going out in a blaze of glory.   Most of them, by the way, in places where legal carry of firearms by civilians was strictly prohibited, sometimes by federal law, often in cities and states where civilian gun ownership is very stiffly regulated.

What she is doing is exploiting the blood of this long list of victims – victims of human evil and dementia, and of government’s short-sighted deprivation of the means of self-defense – for her “group”‘s onanistic gain.  .

What a foul  person the “Reverend” Nord Bence is.  Truly vile and disgusting.

Loathe as I am to elaborate, she makes one other “point”:

The average person will react in one of two ways when confronted with such a list: give up, or get to work.

Wrong.  They respond one of three ways:

We know which one the depraved ghoul Nancy Nord Bence is.

I don’t imagine she will.  Exploiters never do.

1 thought on “Ghouls WIth ELCA Hair”