Ramsey County tore down the old jail and West publishing buildings on Kellogg Boulevard, now the county is ready to negotiate with a developer for new buildings on that site.  When government “negotiates” with developers, I fear the only question will be “how much are Joe Doakes’ taxes going up to pay this developer to take this white elephant off our hands?”

The part that kills me is this: “One of Saint Paul’s greatest assets is the Mississippi River,” said Jonathan Sage-Martinson, director of the Department of Planning and Economic Development for the City of Saint Paul. “Redevelopment on this site will play an important role in further enhancing downtown vibrancy and embracing our position as a river city. This site allows us to connect our downtown community to one of Saint Paul’s most incredible natural landmarks, and I applaud Ramsey County for entering negotiations with a developer who shares that vision.”

No, Jonathan, you’re dead wrong and your council knows it, which is why the City isn’t jumping into this briar patch, they’re letting the County do it.  The river is nothing in St. Paul as presently situated – that’s why the initial colony was located to the East of the present downtown and was called Pig’s Eye – because that’s where the land slopes down to the river so you can get out of your canoe.

Here is a photo of the West building, nearly demolished.  This is the view from Kellogg Boulevard, the major street that runs past the Xcel Center where the Wild play hockey. 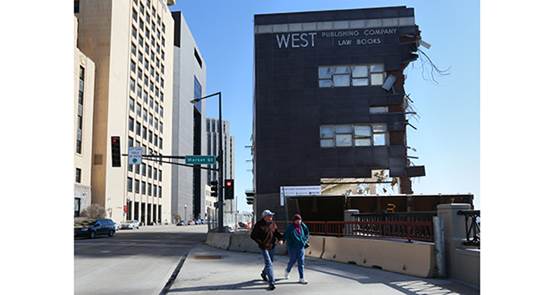 Fine, an ugly three story building gone, right?  Not quite.   Here’s the view of the building from the bridge over the river. 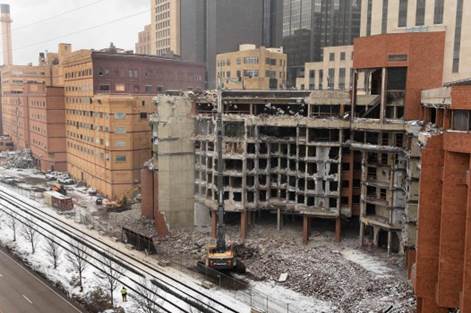 There were three stories ABOVE Kellogg Boulevard and six stories BELOW Kellogg Boulevard, then a railroad track that cannot be relocated, and then a four-lane road (Shepherd Road) before you get to the riverbank.  You won’t be sipping your latte on the bank of the river or strolling along the waterway, you’ll be looking at it from 200 yards away, right about where the yellow crane is sitting in this photo.

Minnesota doesn’t have riverfront developments, mostly because the river bank is a flood zone.  Even St. Anthony Main isn’t on the river – it’s separated by a road.  It’s not a “riverfront” development, it’s a “river view” development, and if you’ve ever priced homes you know that distinction is incredibly important.

This whole thing is idiotic.  Which means nobody would build it on their own, they’ll build it only if they can get a big enough bribe.  I’m already paying for a better Minnesota; I’m not looking forward to paying for a nicer riverfront.

But pay you shall.

The Twin Cities are  noted as two river cities whose downtowns turned their backs on their riverfronts, literally and symbolically.   And in Saint Paul’s case, it’s happened in ways that’ll take a generation or two and an exquisite amount of money to fix.