I missed this one until I was reminded yesterday; 12/26 is the 26th anniversary of the end of the Soviet Union.

It didn’t really get headlines, did it?   That’s because the American Media / Academic / Industrial Complex bet on the wrong side.

The media has spent most of this past generation – a generation – pretending they knew it was going to happen all along; that the Soviet Union was a top-heavy planned nightmare that was bound to collapse sooner than later.  Which may have been true – but absolutely nobody in the Media/Academic/Industrial Complex predicted it beforehand.  Through the eighties, the usual suspects contended the Second World was a viable system; “Soviet Expert” Strobe Talbot predicted the USSR was here to stay as late as 1991.   They’ve also spread the fiction that the USSR didn’t collapse; it came in for a planned, soft landing, courtesy of Mikhail Gorbachev.    It’s nonsense, of course; Gorbachev was a symptom; the Politburo’s reaction to the gathering realization that Reagan was a different breed of President.   While America’s idiot “elites” still chuckle over the invasion of Grenada, inside the Kremlin it was another matter; according to Anatolii Dobrynin (as related in Dinesh D’Souza’s wonderful bio of Reagan), the backing up of a “red line” with overwhelming force rocked the Soviet leadership on its heels, and prompted a reassessment of the USSR’s diminishing options against a re-arming, determined West and an Eastern Europe that was roiling with dissent (supported by coalition of Western Partners, including the unlikely but effective alliance of Reagan, Margaret Thatcher, Pope John Paul II, and Lane Kirkland of the AFL-CIO, who helped funnel US aid to Eastern labor movements that led the battle against the communists).

How hard were the media pulling for the Communists?  In 1994 – barely two years after Russian troops departed Polish soil, when Poland had just spent all but 20 years of the previous several centuries occupied by Hapsburgs, Hohenzollerns, Czars, Nazis and Communists – a short, sharp recession hit the emerging Polish market.  Tom Brokaw went on the NBC Evening News and said “Yut urpeers thut thuh Pawlish uhxpurruhmuhnt wuth thuh fruh markuht huhs FAYLed” (Translation:  It appears that the Polish experiment with the free market has failed”).    Love that double standard, doncha – Fidel Castro’s Cuba got a sixty year pass on the complete collapse of socialism, and Barack Obama is still blaming Bush for things – but Poland got a two year grace period from the media.  Fortunately, the Poles ignored Tom Brokaw, and built a solid, free economy.  (It was, however, the moment I declared personal war on the mainstream media).

Academia’s been worse.  American academia has been tending the collectivist, autocrat flame without a break since the fall of The Wall.

The Eastern Europeans – the hundreds of millions of people in the Baltic States, Poland, Hungary, the Czech Republic, Slovakia, Romania, Bulgaria, Albania, Ukraine, Georgia, and others who started fumbling their imperfect way to freedom, sometimes haltingly, sometimes with detours, sometimes with roadblocks backed with Russian tanks, starting a generation ago yesterday?  They know better.

They’ve dedicated monuments to Reagan all over Eastern Europe. 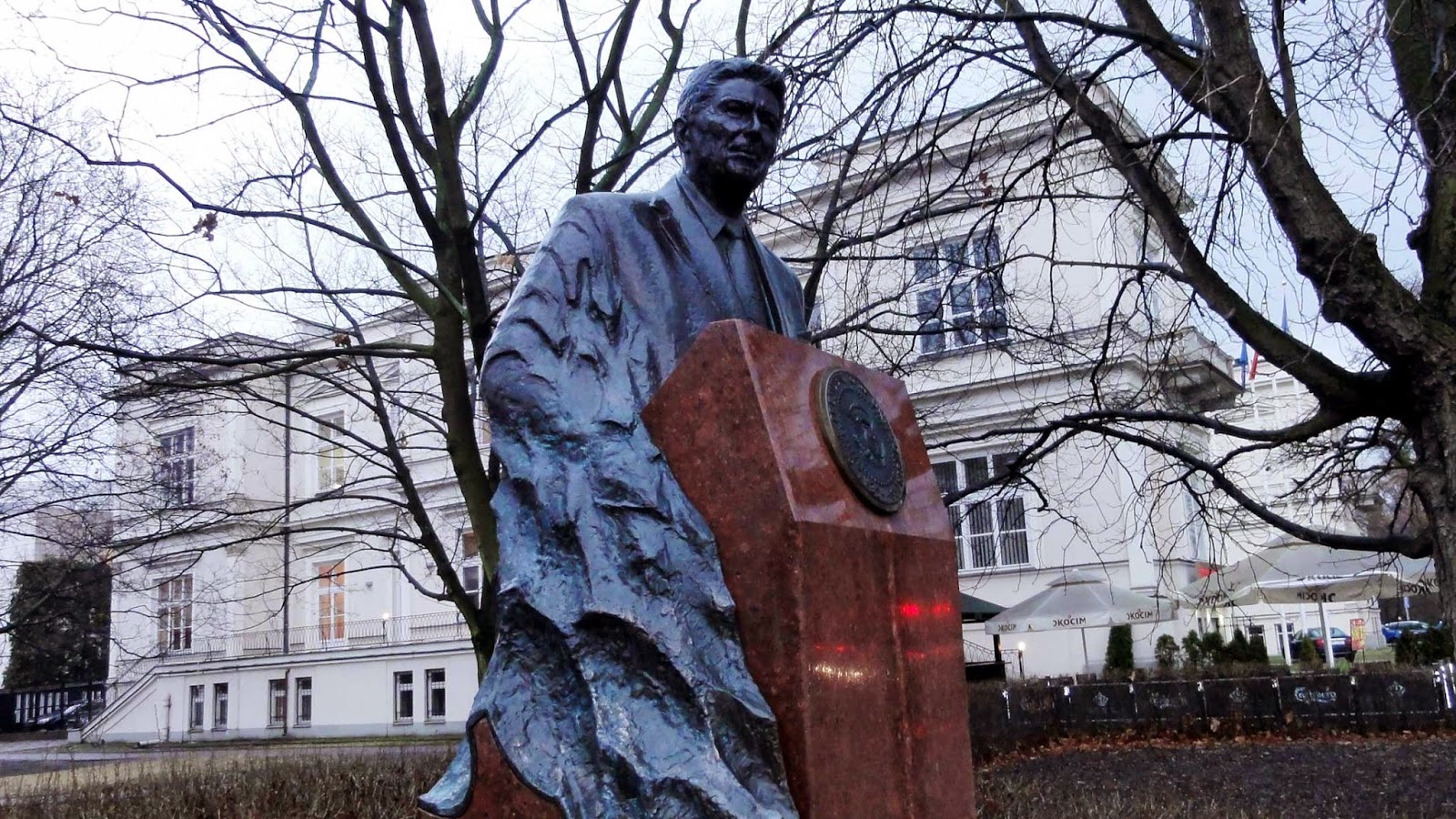 Reagan statue in Warsaw, redolent in the kind of symbolism Polish artists do best.

Statue of Reagan and Pope John Paul II at Ronald Reagan Park in Gdansk, Poland – which is on the short list of “fault lines that led to the collapse of the USSR”.

A Georgian man who used to sit next to me on the bus spelled it out to me; Ronald Reagan was, and is, revered in Georgia, for having “brought us freedom”.

Not random happenstance and a bad economy.

UPDATE:  When I say “the media”, I mean the mainstream one that’s still pining for those cool-lookig May Day parades.  Not the King Banaian Radio Show, which covered the collapse last Saturday.