Their target was the Shellhus, the headquarters of the Gestapo in occupied-Denmark.  With Allied forces breaking through the German lines in both the East and West, the sense that the war had but months or weeks or go was becoming rapidly apparent.  For the dozens of Danish resistance fighters imprisoned in the Shellhus, an attack by the RAF might be their only hope of escaping execution.  Despite the risks of attacking a target in the middle of a heavily-fortified city, both for civilians and attacking pilots (one plane flew so low that it was clipped by a lamp post), the British went ahead.

The raid would be among the last acts in the unique history of Denmark’s survival under Nazi occupation. 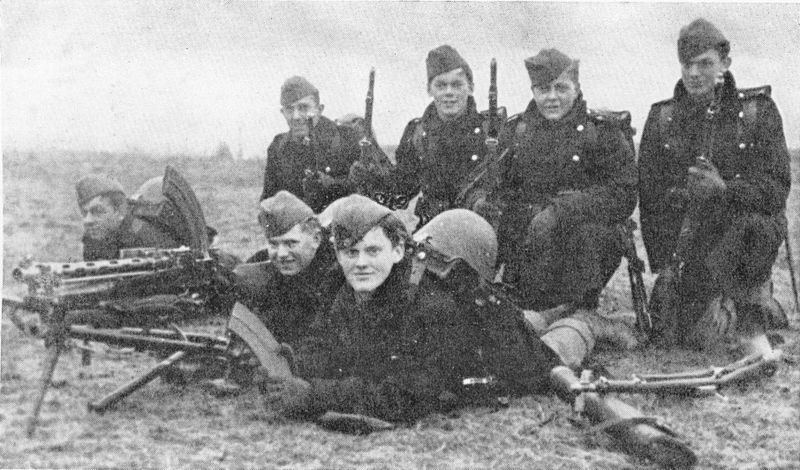 Danish troops the morning of the German invasion in 1940 – 2 of the young men in this photo were killed later that day. In all, it only took the Germans 6 hours to subdue Denmark – the shortest campaign of World War II

The history of Nazi Germany’s occupation throughout Europe was one of human degradation and political humiliation for the vanquished.  Where German boots touched the ground, the Nazis found either willing collaborators like Norway’s Vidkun Quisling or politically expedient allies like the Vichy French.  Whether direct or in-direct, Nazi rule bled into every facet of the society of its occupied victims. Footage from the actual bombing run on Shellhus. One of the RAF Mosquito’s can be seen over the target

From 1940 to 1943, Denmark was often referred to as the “model protectorate” – the image of Nazi occupation that Germany wanted broadcast to the rest of the world.  Whereas in other nations the Germans had dismantled the political structure of their opponents, Denmark’s monarchy and democratically-elected government were allowed to remain in power.  Danish authorities ran the police and military, and with the exception of the stationing of German troops in the country, Denmark went about its business pretty much as it had before the war. Dr. Werner Best (right) – in essence, Germany’s governor-general of Denmark before the formal occupation. Best supervised civilian affairs in Denmark but had no real control except to apply political pressure

Underground resistance newspapers and clubs were blossoming.  Members of the Danish military were relaying troop movements and construction of the Danish sections of the Atlantic Wall to British intelligence.  King Christian X, whom the Germans believed might be sympathetic to Nazism given his own penchant for authoritarianism, publicly rebuked the occupation in ways large and small.  He rode on his horse in downtown Copenhagen every day, without guards, as a sign that he had nothing to fear from the German troops.  And when the Germans threatened to have Danish Jews wear the yellow star of David, Christian threatened in return that he too would don the yellow star in solidarity.

Other political acts were more direct.  Allowed to conduct free and open elections, the parliamentary campaign of 1943 was a stunning rebuke to German hopes that the Danes would willingly embrace Nazism.  With voter turnout at nearly 90%, the Danish National Socialist Party gained a paltry 2.1% of the vote and 3 seats in parliament.  Despite giving the Danes relative freedom, they hadn’t freely chosen to get in line with their goose-stepping overlords.  It was a choice Denmark would pay for.

Danish Treat – the resistance lost an estimated 800 fighters, while killing an estimated 400 collaborators during 1943-45

By August of 1943, German interest in maintaining the “model protectorate” had faded.  Acts of sabotage, which had been few and far between initially, were now on the rise with the Danish authorities seemingly disinterested in making arrests.  Coupled with the country’s increasing political shift away from National Socialism, Berlin gave Copenhagen an ultimatum – either crack down on the resistance movement or accept direct German rule.  The Danes refused and by September of 1943, Denmark had formally joined the ranks of “occupied” nations under German rule.

One of Nazi Germany’s first acts in their occupation of Denmark was to round up as many Danish Jews as possible.  Alerted to the Nazi’s intentions, Danish authorities (including King Christian X), manage to help nearly 8,000 Danish Jews escape to Sweden.  Only 472 Danish Jews perished as a result. Danish POWs – taken in 1943, most of the Danish military was disarmed after direct German rule. The Danish Navy managed to scuttle most of their ships to avoid them being used by the Germans

With occupation also came Allied assistance.  Denmark had never declared war on Germany – partially because the entire Danish campaign lasted only six hours – and there was considerable doubt among the Allies about how strongly the Danes truly objected to their German masters.  The Danish government had actively discouraged resistance, albeit under the hopes that compliance would yield fewer hardships.  But with Copenhagen’s government now formally overthrown, British and American arms and aid flowed into the country.

Given support both externally and internally, the Danish resistance flourished.  Gestapo informants clammed up as resistance fighters shot collaborators.  German trains on Danish rails were destroyed and thousands of Danish workers went on repeated strikes to block any industrial contribution to the German war effort.

Denmark’s King Christian X – Christian had been fairly unpopular before the war for dismissing parliament in 1920 and installing one more favorable to him. But WWII renewed his popularity as a symbol of passive resistance to the Nazis

But resistance also brought harsher and harsher German reprisals.  The repeated strikes led Germany to increase its occupation force – an attempt to literally force the Danes back to work.  Exasperated, the Germans executed 102 resistance fighters at Shellhus as an example of what further resistance – active or passive – would bring to Denmark.  As a result, the resistance hatched a plan – bomb Shellhus.

For months, the RAF made models of Shellhus and downtown Copenhagen.  At such low levels, the striking pilots would have but a split-second to recognize Shellhus and deliver their payload.  Any mistake could be extremely costly – the Jeanne d’Arc School was located nearby. The end – warfare like this was not really seen in Denmark until the final weeks of the war. As the Nazis retreated, resistance fighters confronted German troops in the open

The 18 de Havilland Mosquito F.B.VI fast bombers swooped over Copenhagen in three waves – the first striking Shellhus‘ west end with deadly precision.  A few bombs in the first wave fell short of their target, but as the second and third waves approached, they spotted a burning building and released their bombs.  But the burning building in question was not Shellhus – it was the Jeanne d’Arc.  125 civilians, 86 of them children, were killed.

Shellhus was effectively destroyed as well.  Over 100 German and Danish Gestapo employees were killed, allowing for 18 prisoners to escape.  More importantly, the bombings destroyed many of the Gestapo’s Danish records – lists filled with suspected Danish resistance members.

At great cost, the Gestapo’s operations in Denmark had been destroyed.  Whatever plans the Nazis had to enact retribution against the Danes in the war’s final weeks would come to naught.