The end was but hours away.  A small French force, numbering less than 50,000, took up a last-ditch defense; horribly outnumbered by the 1st & 7th German Armies crashing down upon them.  Even the Italian 4th Army was managing to swallow territory and POWs.  The French government radio broadcasts vainly tried to rally their people to the defense, but such cries fell on deaf ears.  The defeat was total.

Only this wasn’t June of 1940.  Nor was it the fall of the Third Republic.  Rather, the soldiers who fought and died on November 10-12, 1942 did so under the colors of the État Français or French State.  It was among the final chapters – but not quite the last – of the Vichy collaboration with the Nazis.

Defeat in 1940 had cost the French more than their freedom; it cost them their identity.

Hitler’s brutal terms of the June 22nd armistice stripped France of little actual territory – only the long fought over Alsace-Lorraine region changed hands (and even that wasn’t actually annexed).  Most of the northern half of the country, and the Atlantic coastal region, was deemed the “occupied zone”, allowing for German troops to remain stationed against any potential Allied invasion, but be civilly administered by the new French government based out of Vichy.

Petain assumes command. The Victor of Verdun immediately blamed democracy for the fall of the Third Republic and adopted a quasi-fascist government model

At the helm was a man hailed as a French national hero.  Marshal Philippe Pétain had rallied French troops amid the slaughter of Verdun in World War I and was widely credited at home as having turned the tide of the war against the Germans.  Pétain’s patriotism and anti-German credentials were seen as beyond question.  It was little wonder then that as Prime Minister Paul Reynaud resigned (his cabinet refused to support his intention of relocating the government to North Africa and continuing the war), Pétain was tapped to succeed him as PM.  At 84 years of age, Pétain took charge of a nation reeling from a shocking German offensive.  Six days into his government, with still more than half the nation free of German occupation, Pétain chose surrender to resistance.

His choice set the stage for the next 2 1/2 years.

The Hero of WWI; the Villain of WWII – Marshal Petain shakes hands with the man who destroyed France

The French had little leverage at the Second Compiègne – so named as it was the site of the initial German armistice in 1918.  The 1.6 million French who had surrendered to German forces would not go home but remain a permanent slave workforce.  The French government might have civil control of the “occupation zone” but had to pay for the 300,000+ German troops stationed in the north and west – to the tune 20 million Reichmarks a day.  And the French were expected to assist the Germans at every turn.  From preventing civilians escaping the country to rounding up French Jews,  the newly formed government at Vichy might be French in purpose but German in nature.

There were no shortage of collaborators.  When the new Vichy government met on July 1st, former 4-time Prime Minister Pierre Laval twisted arms to ensure that Pétain was given absolute power.  Laval defend the move to despotism, stating: “parliamentary democracy has lost the war; it must disappear, ceding its place to an authoritarian, hierarchical, national and social regime.”  Pétain agreed.  The French motto of Liberté, Egalité, Fraternité (Freedom, Equality, Brotherhood), was replaced by Travail, Famille, Patrie (Work, Family, Fatherland).  The national anthem became Maréchal, nous voilà! or Marshal, here we are!  Even poor Paul Reynaud, now stripped of any power, was thrown in jail for life in a sham trial.

All Hitler wanted was France out of the war; he cared little what style of governance the Vichy had as long as they stayed out of the way.  All the German General Staff wanted was access to French ports and the French navy out of the fight.  It had taken German troops to occupy Paris.  But it took French collaborators to bring fascism to France.

The Waffen-SS Charlemagne Division – an SS Division of French recruits

Collaboration took many aspects.  The Parti Populaire Français, a nationalist group that predated the war, took a greater role in politics even as they decried Pétain’s “moderation.”  Action Française, a right-leaning political party, described the German victory as a “divine surprise.”  The Légion des Volontaires took recruits to fight in Russia while some joined the German Army directly such as the Waffen-Grenadier-Division der SS Charlemagne – a unit that finished the war in the ruins of Berlin.

Worst was the French collaboration with Nazi racial policies.  15,000 French Jews were “denaturalized” – stripped of their citizenship as to make it easier for them to be arrested and hauled off to Germany.  Thousands more “undesirable” persons including gypsies, homosexuals, and political prisoners found their way onto French trains en route to German concentration camps.  Some didn’t have to travel that far – the Natzweiler camp was opened on French soil and included a gas chamber.  An estimated 90,000 Jews died after being captured by the French.  14,000 of them in French concentration camps.

None of these actions damped the Allies’ attitude towards Vichy, which they regarded as the legitimate French government.  History has Gen. Charles de Gaulle leading the French in exile.  In practicality, de Gaulle was despised by the Allies.  FDR remarked that de Gaulle was an “apprentice dictator.”  Recognition of de Gaulle’s Free French Army as the official government of France didn’t happen until October of 1944 – four months after Paris had been liberated and nearly two years after Vichy had been overthrown by the Nazis.

Resistance abroad may have been the face of Charles de Gaulle, but resistance at home was rarely seen outside the shadows.  La Résistance captured hearts and minds and the attention of the German Army, but initially fought little against Vichy.  The courtesy was not returned.  The Milce (militia) was Vichy’s response to the Resistance.  Tens of thousands of Milce joined the hunt for Resistance members, torturing and murdering to extract information.  The result was a simmering civil war, with political leaders on both sides being assassinated, including Philippe Henriot, the Vichy regime’s Minister of Information and Propaganda.  Such bloodshed during the war was slight by comparison to what followed after liberation.  25-35,000 miliciens serviced Vichy.  Most of those who survived the war found death at the hands of the new French government.

The famed French Resistance: they rarely targeted Vichy forces despite Petain most certainly targeting them

The real French Civiil War wasn’t happening in France but in the overseas colonials that had defined the nation as an Imperial power.  In the months and years that followed the fall of France, the choice for each colonial outpost became stark – join the Free French or submit to Vichy.

Such a choice almost didn’t happen.  In the immediate aftermath of the French surrender, Winston Churchill hoped that he could convince the new Vichy government to somehow continue the war or at least give in to British demands regarding the French Mediterranean Fleet or bases in French colonial territory.  Seeing that Vichy had no stomach for a fight, Churchill reluctantly turned to de Gaulle, despite holding similar views as Roosevelt about the rebellious French general.

Some regions, especially Central Africa, quickly joined the Free French.  Others, such as North Africa, the Middle & Far East regions, remained loyal to Vichy and were eventually invaded and occupied by Allied troops.  These campaigns, largely forgotten to history, have not been forgotten by the French.

The “Armistice Army.” France was allowed to keep a minimal army to defend principally their colonial outposts from Allied invasion

The Battle of Mers-el-Kébir in French Algeria – a British operation to sink the French fleet to prevent their use by the Germans – killed nearly 1,300 French sailors.  The campaigns against Vichy Syria and Lebanon, where French troops made up the majority of troops on both sides, killed at least 12,000.  The invasion of Madagascar was minor by comparison – only a few thousand killed or wounded.  The death toll might pale against the backdrop of a conflict that killed millions, but the significance of Frenchmen fighting each other for (at the time) vague political concerns, hinted at the chasm that awaited France at the end of the war. 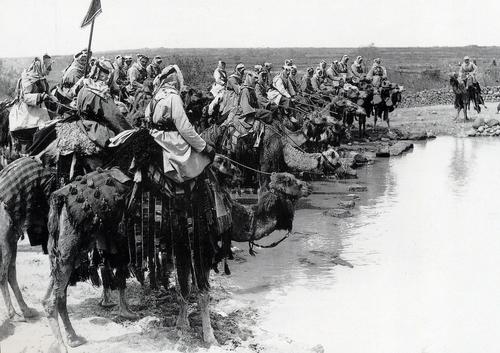 The Allied invasion of North Africa prompted the beginning of the end for the Vichy regime.  Worried about a potential invasion from southern France, German and Italian forces launched Case Anton – the invasion of Vichy-held France.  Unsure whether to resist or lay down their arms, the Armistice Army did both.  Vichy was already in panic from the Allied invasion which had inadvertently managed to capture the government’s Prime Minister, former head of the Navy François Darlan. Now Vichy found themselves as nothing more than a Puppet government; a shell corporation to pay for a German occupation of all French territory.

Yet the principles of Vichy seemed as though they might live on.  Despite being a major collaborator, Darlan was viewed as necessary to get Vichy forces on the Allied side in North Africa.  Securing Darlan’s release from Free French forces, the Allies placed Darlan at the head of the French African colonial government – and promoted Darlan as the head of the Free French resistance.  In less than 72 hours, the Free French saw themselves capture one of their biggest opponents and then be told their prisoner was to become their commander.

Darlan didn’t get to enjoy his power for long.  The Allies quickly grew to detest him.  The Free French loathed him.  “Once bought, he stayed bought” was the kindest thing said of Darlan’s newly acquired love for French democracy.  And few tears were shed when Darlan was shot by a monarchist on December 24, 1942.  It was an early Christmas present for the Free French and cleared de Gaulle of his last major internal opponent. 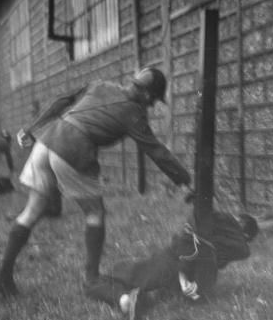 A Milce meets his end. Anywhere from 40,000 to 100,000 collaborators were killed after the fall of Vichy

Victory did not bring peace.

Tens of thousands of collaborators were executed.  Some had the benefit of a fair trial.  Most did not.  Pétain was charged with treason and sentenced to death, only to be commuted by de Gaulle who didn’t care to see the Victor of Verdun, a man pushing 90, shot to death.  Few in the government were as lucky.  Pierre Laval’s past service bought him no favors and he was executed on October 4, 1945.

Such deaths ended the Vichy era but did not define it – a dilemma the French have wrestled with ever since.  Pétain and Laval argued at the time that state collaboration protected the French civilian population. After the war, former Collaborationists and “pétainistes” (supporters of Pétain) claimed that while de Gaulle had represented the “sword” of France, Pétain had been the “shield” which protected France.  It was not a debate France was eager to have in the aftermath of the war.  De Gaulle himself tried to paper over the Vichy era by proclaiming that the illegitimacy of the regime forgave the actions of many Vichy officials.

While many pardons were doled out by de Gaulle and his successors, war crimes trials against other in Vichy continued for decades.  French civil servant Maurice Papon was among the last charged and tried for his role in the deportation of 1,600 Jews to concentration camps – in 1998.