The Polish National Anthem is a song that conveys the central theme of Polish nationalism over the past 300 years; it’s always been undereground, or elsewhere.

The song goes on to list decades, centuries of betrayals, and false hopes (the Poles bet long on Napoleon in the Napoleonic Wars, and paid horribly for it).

Seventy years ago today, one of the great examples of heroism, and the most ignoble examples of betrayal, launched.

The Armed Citizenry:  The first European country to fall to the Nazis, the Poles were the first to organize their resistance.  Tens of thousands of Poles fled through Romania to North Africa, thence to France (we’ve written about some of them), and to Britain; others defected to the Soviets, and fought in the Red Army.

Among Poles that remained, several resistance movements started.  Polish Communists formed a large underground force. It was (like most communists) internationalistic, and allied with Moscow, and one of the two Polish governments-in-exile.

But the biggest group, the Armia Krajowa or “Home Army”, was Polish nationalists.

The flag of the Armija Krajowa.

They were intensely nationalistic; some were monarchists; most importantly, they owed their allegiance to the government in exile in London.   The Armia was , in every particular, a shadow government and military operating under the Nazis’ noses, complete with an underground media, rudimentary education and social services, and underground weapons plants producing explosives, grenades and bombs, and even small arms.  And, most of all, a military.  Estimates of strength vary between 250,000 and 600,000, with most estimates coagulating around 400,000. And at times the Communists and the Armia Krajowa fought each others more than the Nazis (and after World War 2, this would continue).

“But how will you fight tanks with rifles?” An AK unit on a captured German “Panther” tank, 1944.

But both managed to spare plenty of aggression for the Nazis; both movements caused immense damage to the Nazi war machine.  The AK in particular focused on attacking the road and rail grid through Poland, which connected the German industrial heartland with the war front in Russia.  It’s estimated that an 1/8 of all German trains through Poland were either destroyed or severely delayed – and that transferred into shortages of ammunition, food, and troops at the front as the brutal meatgrinder of the Eastern Front dragged on toward its fourth unprecedently bloody year.

Opportunity:  But seventy years ago, the tide of war had turned.  Stalingrad had fallen over a year earlier; the last major German attack at Kursk had failed, and the German front in Russia was collapsing ever more rapidly back on the Fatherland.

And as the Red Army moved into Poland, the Armia Krajowa readied its greatest operation; a revolt to eject the Germans from Warsaw, and welcome the Soviets as liberators.

Seventy years ago today, on August 1, 1944, the Armia Krajowa launched the Warsaw Uprising.

The story is told in the great detail it deserves in many places; suffice to say that the AK took much of the city, but failed to overrun several key German strongpoints, including the bridges over the Wisla river, or Mokotow airport, into which it had been hoped supplies could be flown from the USSR or even Britain. 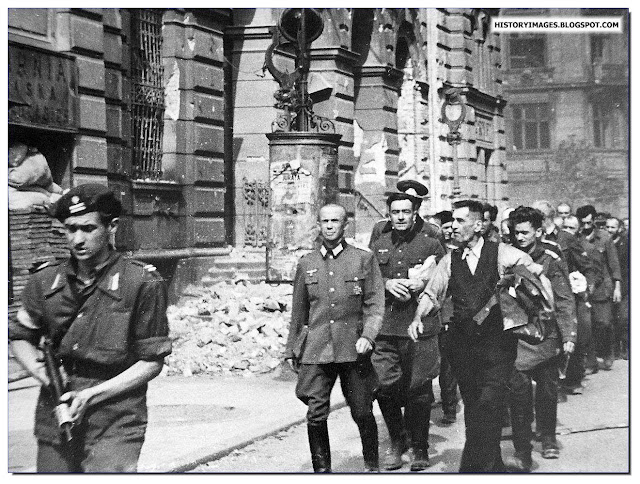 AK troops herding captured German troops into captivity. While the AK tried to act like the Geneva-Convention signing force that Poland had been, the SS massacred thousands of AK prisoners and innocent civilians.

Still, the AK – very well-armed for an underground force, with improvisations including a homemade armored car – controlled much of the city, and engaged the Nazis in what Heinrich Himmler called the most brutal street street fighting since Stalingrad.  By the end of August, the Germans controlled the main strongpoints – and the Poles, most of the rest of the city. An AK soldier with a captured German flamethrower.

All that remained was for the Soviets to drive the Germans out of the eastern suburbs, and cross the bridges over the Wisla. 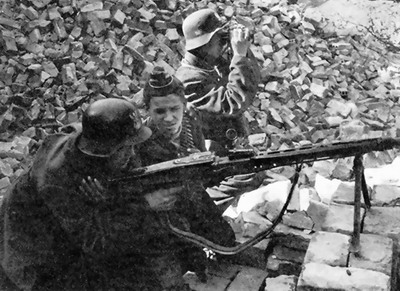 AK troops, with captured German helmets as well as a German MG42 machine gun, during the Uprising.

Halt:  But although the Soviets fought their way to the east bank of the Wisla by mid-September, they pressed the attacks slowly, allowing the Germans to blow the bridges connecting Warsaw with Praga, the main east-bank suburb.

And there, they halted.

And slowly, through attrition and supply exhaustion (despite an effort to airdrop supplies by British, US and Polish exile air forces flying from the UK), the Armia Krajowa was ground down, with about half the original 50,000 combatants escaping into the woods, leaving behind over 200,000 dead civilians – killed in the battle or murdered by Germans in wholesale lots, until even the SS realized it was only making the Poles fight harder – and nearly 10,000 dead Germans, and a city that was destroyed nearly to the last building. SS troops advancing through “Old Town”, the first major AK stronghold to fall. The SS – which included Russian POWs as well as ethnic Aryan Germans, all of whom hated the Poles – was especially brutal during the uprising.

Belatedly, the Soviets, under General Rokossovskii, allowed a number of Polish exile units fighting under the Soviet flag – “Berling’s Army” – to attempt to cross the Wisla; 5,000 casualties and no significant benefit resulted.

Of course, there had never been any intent to cross the Wisla and rescue the AK on Stalin’s part; the pause on the east bank was done entirely to allow the Germans to kill off as many conservatives, monarchists and western-aligned troops as possible, so that he’d not have to do it himself later.  And the costly frittering-away of Berling’s Army?  A bloody whittling-down of two forces the Russians needed cut down to size; uppity Poles in Soviet uniforms, and Germans.

When the Soviets finally took Warsaw and the rest of Poland, they installed a puppet government that lasted 45 more years.  Many of the survivors of the Armia Krajowa fought on until the late forties, even the early fifties, killing communists long after all hope of relief from the West was gone.

I always thought the Polish Anthem should add a verse dedicated to the Warsaw Uprising.