Amid the carnage of the massive Kursk offensive, on the morning of July 10th, the 1st SS Panzergrenadier Division Leibstandarte Adolf Hitler set out to create a small bridgehead as part of a larger advance on the settlement of Prokhorovka.  The Leibstandarte, once Adolf Hitler’s personal bodyguards, were an elite SS unit, often spearheading attacks in the East.  Despite two days of tough fighting, the Leibstandarte made no progress against the Soviet 52nd Guards Rifle Division.

With such elite units gaining no ground, both German and Soviet local commanders believed the solution to breaking the stalemate at Prokhorovka was more armor.  Little could they have known they were setting the stage for one of the largest (if not the largest) tank battle in history.

Armor All: 300/400 German tanks squared off against maybe as many as 870 Soviet tanks in the largest mobile armored battle in history

By the summer of 1943, the tide of war could be felt slipping away from the Axis.  Stalingrad had consumed 850,000 German, Italian, Romanian, Hungarian and Croatian troops, not to mention nearly 1,000 aircraft and 1,500 tanks.  The North African campaign had seen 300,000 casualties to shore up a failing front, only to see Sicily invaded on July 9th.  The Allied bombing campaign was beginning to dominate the skies over Germany, while American and Soviet industry began to seriously outpace German production. The Axis hadn’t just lost manpower and territory but the strategic initiative.

For Generalfeldmarschall Erich von Manstein, widely regarded as one of Germany’s best commanders, and placed in charge of the Southern Front in the East after Stalingrad, the solution was to assume a defensive position against the Soviets – let them bleed themselves out in offensive operations.  Hitler demanded Germany go back on the attack.  Hitler remained deeply distrustful of the Wehrmacht and Manstein in particular, believing Manstein’s requests for “unrestricted operational freedom” was nothing more than Prussian code for retreat.

A “compromise” of sorts was developed.  A limited offensive against the Kursk salient, created by the collapse of Axis forces following Stalingrad, would occur in hopes of robbing the Soviets of any offensive ability. Unternehmen Zitadelle (Operation Citadel) would be a grand-style pincer movement, encircling the entire Kursk bulge. Loose Tiger: the epitome of German tank engineering, the Tiger I was, for a time, the king of the armored jungle. Its 88mm gun gave it superior distance, but its cost (2x as much as a Panzer IV & 4x as much as a StuG III) made them irreplaceable on the front

Over 900,000 men and nearly 3,000 tanks would be involved in this “limited” offensive.  Against them stood 1.9 million Soviet troops, 5,000 tanks and a commander structure that knew when and where the Germans were coming.  Soviet intelligence had been tipped off about Kursk from the German anti-Nazi “Lucy” spy ring in addition to the Soviet mole at the British decoding effort at Bletchley Park.  In response, the Soviets built a six-layered defense at Kursk, planting nearly 1 million mines before Operation Citadel began on July 5th, 1943.

By July 12th, the Soviet advantages of preparation and numerical superiority seemed to be at their breaking points.  The 2nd SS Panzer Corps, the major corps attacking from the south of Kursk, had broken two defensive rings and was in the process of getting through a third.  Soviet resistance was bitter, but had made some critical early mistakes.  Soviet commander Georgy Zhukov, newly made Marshal of the Soviet Union for his victory at Stalingrad and breaking of the siege at Lelingrad, had convinced Stalin that a defensive position at Kursk could open up the opportunity for a major Soviet offensive.  But only one day into the German offensive, and against the wishes of his commanders, Stalin ordered a counterattack.  Instead of Zhukov’s crushing blow, tank units were slowly fed piecemail into the teeth of 2nd SS Panzer Corps.

Despite all odds, the Germans were winning the Battle of Kursk.

Kitty Can Scratch: the Panther was cheaper than the Tiger but packed a similar punch. Unfortunately (for fortunately for history), the Panthers at Kursk had barely been field tested when they went into battle and broke easily

The early German successes were also in spite of the new weapons they were fighting with.  Kursk had been postponed to await the arrival of the two newest tank designs in the Wehrmacht – the Tiger I and Panther.  Both were massive tanks, the product of fine German engineering, and were devastatingly effective on the battlefield…when they worked.  The Tiger I was the epitome of German “over-engineering.”  Complicated and expensive to build (only 1,300 were made), the Tiger I consumed gas at an alarming rate and broke its trends quickly.  The Panther was cheaper and more reliable, but hadn’t been tested by its crews before it went into battle.  Experienced German tank units suddenly looked like recent draftees.

Opposing them, the Soviet T-34 was neither pretty nor meticulously produced.  Inferior transmissions created frequent mechanical failures and the poorly ventilated interior “create an inhuman harshness for the driver.”  But T-34s were well-armored, fast, durable, and could be produced quickly.  Nor did it hurt that their tank crews were increasingly veteran by the time of Kursk.  They  would need to be.  The T-34s 3-inch guns couldn’t penetrate the Tiger I or Panther armor, while German 88mm’s could easily rip through even the thickest Soviet armor.  The result was that Soviet tank commanders had to be nimble and practice encirclement tactics – not unlike the Germans who were now weighed down with gigantic, gas-guzzling vehicles that lacked the ability to maneuver quickly.

The Soviet T-34: called the “deadliest tank in the world” by German Gen. Heinz Guderian. Over 84,000 were built during the war, and some 27 countries still use T-34 models today.

54 miles to the south of Kursk, all of these factors combined in the Battle of Prokhorovka.  The 2nd SS Panzer Corps and the 5th Guards Tank Army would collide as both sides had been instructed to go on the offensive and either capture or relieve the tiny settlement of Prokhorovka and the third ring of the southern Soviet defense of Kursk.

Despite the fame the battle would later take, there are no exact figures for the scale of the fighting.  Woven amid the larger Kursk battle, Prokhorovka’s human cost disappears into the background.  Estimates of armor present at Prokhorovka range around 300-400 to as high as 700 German tanks and assault guns versus 600-870 of the same on the Soviet side.  Prokhorovka would end as the most intense tank battle in history but maybe only the second largest.  The second Battle of El Alamein in November of 1942, with a confirmed 1,500 tanks between the British and the Germans/Italians, might have been the largest.

Regardless of the exact scale of the battle, Prokhorovka was a living hell for any tank commander on July 12th, 1943.  Russian tanks, underestimating the armor of the Tiger I’s, rushed their opponent in the hopes of closing the distance and avoiding being destroyed before their guns could hit the German Panzers.  It was a deadly mistake as the Russians discovered that the T-34s couldn’t pierce the Tiger I and Panther armor even at close range.  Worse, German anti-tank units turned the defense lines the Soviet had once dug into positions for themselves and picked off Soviet tanks with ease.

Compounding matters was the presence of the Luftwaffe.  While the Red Army Air Force had begun to hold their own, and even surpass, the Luftwaffe on the Eastern Front, Soviet air-to-ground communications were nonexistent at Prokhorovka.  Why?  Many T-34s had improperly installed radios, and those that were installed correctly lacked armored protection.  Coupled with the Russian tactic of charging into German tank formations, which made coordinated assaults difficult as Russian losses mounted and units retreated in disorganized fashion, the Soviet Air Force didn’t know it was needed and thus was rarely seen over Prokhorovka.

By nightfall on the 12th, the Germans were now positioned to the north of Prokhorovka, through the third defensive line, and positioned to turn the flank of Soviet forces in the southern section of the Kursk salient.  German losses had been heavy, but nothing by comparison to the Soviets.  Over 3,000 Germans had been killed or wounded, but almost 26,000 Russians had suffered the same fate.  The Germans had lost less than 150 tanks; the Russians an estimated 478.

Field Marshal Erich von Manstein (right): the reluctant architect of Kursk, Manstein might have produced a German victory if not for Hitler’s sudden cold feet

A battle that had seen more than its share of inference from political leaders saw one last blunder.  Despite their roles leading up to Kursk, Hitler and Manstein now switched views.  Manstein believed victory at Kursk was within sight; Hitler believed they had to retreat.  The Allied invasion of Sicily and counter-offenses by the Soviets elsewhere on the Kursk front shook Hitler’s nerves.  On July 13th, Manstein was ordered to conclude the Kursk offensive, with some exceptions on the southern front.  Thus, Provkhorovka, which had been a German tactical victory, ended up looking more like a strategic defeat.

In the aftermath of Kursk, Manstein believed he had won a broader victory.  The Soviets had been bled white for the summer, and while Manstein had not recaptured the strategic initiative, neither had the Soviets.  At the expense of over 1 million lives, Manstein viewed the Eastern Front now as a “draw”, awaiting whichever force could muster the resources to regain the offensive.  He was sorely mistaken. 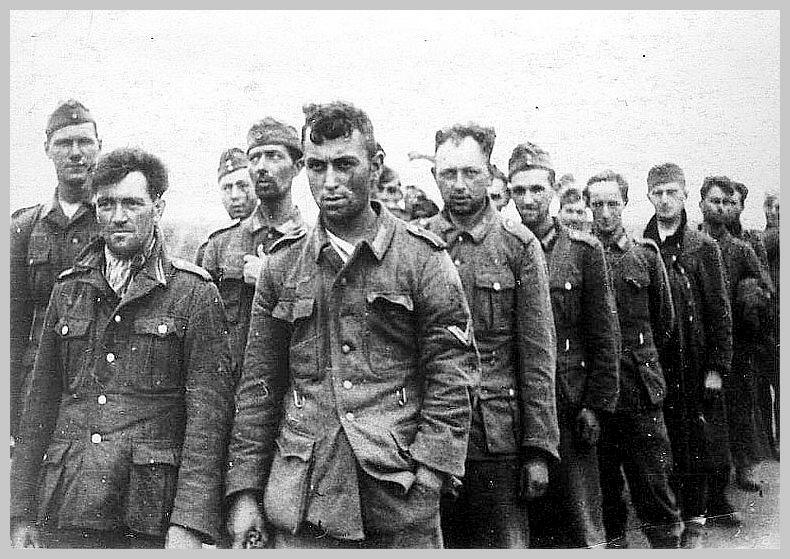 The Face of Defeat: the Germans lost over 200,000 men in the overall Battle for Kursk and an estimated 760 tanks. The Russian losses were much larger (863,000) but much more replaceable

The Soviets seized the initiative after Kursk and never gave it back, mounting an offensive into Kiev by September.  Kursk also solidified the opinions of the two major political leaders warring on the Eastern Front.  Stalin, who had famously purged the Soviet military, had placed his trust in Zhukov and other generals and had been rewarded with significant victories.  Hitler, despite having ordered and then canceled Kursk against the wishes of the German General Staff (both times), blamed the outcome on his generals.  For the remainder of the war, Hitler would become increasingly involved in tactical planning while Stalin did not.

Although the Germans would attempt several other minor offensives on the Eastern Front until the end of the war, Kursk represented the last German effort to shift the strategic momentum of the war.  Even the famous Ardennes Offensive (the “Battle of the Bulge”) was little more than an attempt at a temporary tactical advantage.  Few could have imagined at the time, but Germany was now set on the road to defeat. The Advance Continues: “Stalingrad was the end of the beginning, but the Battle of Kursk was the beginning of the end.” — Winston Churchill

3 thoughts on “Cracks in the Armor”