As we noted last week, Rep. Michael “The Kia Hamster” Paymar is proposing a bill to ban citizen carry at the Capitol complex. 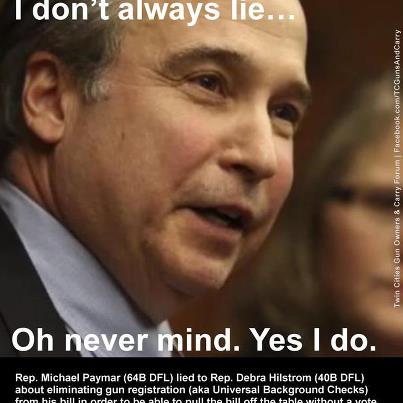 Keep this in mind:  to carry at the Capitol, a citizen (as opposed to a law enforcement officer) must have a valid carry permit – which means that they…:

…and have notified Capitol Security that they – a legal citizen – intend to carry in the Capitol complex within the limits of the law.

There’s no reason for this, of course.  State Capitol police happily admit they’ve never had a whiff of a problem with a legal carry-permittee carrying a firearm at the Capitol.  No outbursts, no threatening behavior, no nothing.

Oh, Paymar and his metrocrat pals funneled out a fake meme in the in-the-bag media that legislators were feeling “intimidated” by all the citizens with firearms in the hearing rooms.  I don’t doubt that there were a few metrocrat ninnies who do wet their pants at the sight of a firearm alone.

But Paymar was deflecting – trying to draw attention away from the fact that his proposals were getting creamed.  Even in a legislature controlled by Metrocrats.

What would be less humiliating for a legislator:  to claim that a mob with guns killed your bill, or the fact that even your own party deserted your cause?

That is the only reason Paymar is proposing this change in the law.

There were how many murders overnight in the Twin Cities? We have rampant gang warfare being carried out on the streets, but the highbrow lawmakers and bureaucrats are more focused on taking guns out of the hands of peaceful law abiding citizens. They are far less dangerous than violent criminals

We know that.  So does Paymar.  This proposal isn’t about facts.

The Real Americans that stymied Paymar last spring are not sleeping through this.  We’ve got work to do on Tuesday:

The Advisory Committee on Capitol Security will hold two meetings to consider changing current law to ban concealed carrying of firearms by permit-holders in the state Capitol.   The first meeting will be held this Wednesday, August 14, from 11:00 am to 12:30 pm at the Minnesota State Capitol in St. Paul on 75 Rev. Dr. Martin Luther King Jr. Blvd. in Room 107.  This meeting will focus on discussion of current law and policy, and there will be no public testimony heard at this meeting regarding firearms on the Capitol Complex.  To view the agenda for this meeting, please click here.

On Tuesday, August 20, this committee will meet again from 10:00 am to 11:30 am at the Minnesota State Capitol in St. Paul on 75 Rev. Dr. Martin Luther King Jr. Blvd. in Room 107 to discuss policy changes to current standards regulating firearms on the Capitol Complex.   Please attend this meeting and OPPOSE these changes to current law that would ban concealed carry in the state Capitol.  Public testimony will be heard (though time may be limited).  If you wish to testify, please submit your name in writing to angela.geraghty@state.mn.us.  To view the agenda for this meeting, please click here.

Please plan to arrive at least an hour before each meeting.  Remember, with a permit, concealed carry is lawful in the Minnesota State Capitol and other state buildings in the area if you have notified the Commissioner of Public Safety of your intent to do soin advance

But I’m going to do what I can. I hope you will too.

6 thoughts on “A Stupid Solution To A Nonexistent Problem”