If you show this image around the world… 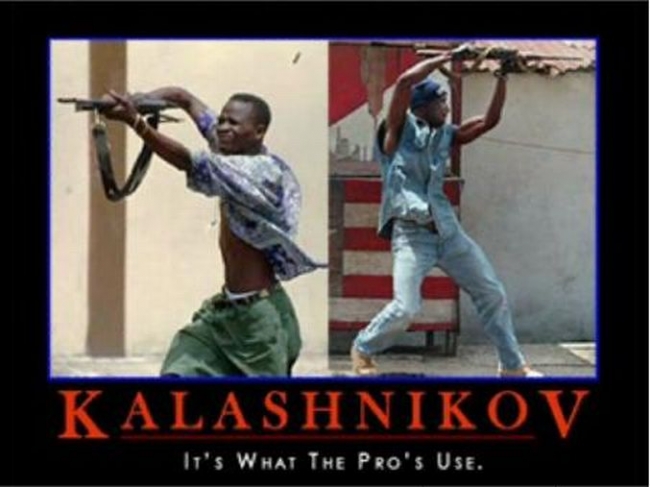 …or “gangs of teenage thug “militiamen” here for your stuff”.

The AK47 is one of the iconic images of the past 100 years. More than 100 million AK-series rifles have been built – the vast majority of them serving the militaries of totalitarian dictatorships, he private guards of warlords and thugs, and “revolutionary” groups around the Second and Third Worlds from the 1950s to today. It’s the AK-series (colloquialized as the “AK-47” in the US, although it covers the vastly more-numerous AKM, the more modern AK-74 and others) that served everyone from the guards at Red Square to the Viet Cong to the militias of Mogadishu. The AK was romanticized by the American left (Che uses ’em!) and then, as the Cold War wound down, demonized (so do the Crips!).

It developed a substantial mythology that largely obscures the political and social aspects of its design; designed to be rugged and easily maintained by illiterate peasants, it is not an accurate rifle; it’s designed for badly-trained people to spray automatic fire in your general direction, to scare you away, or to keep your head down long enough for someone to throw a grenade at you. It is the very antithesis of the American tradition of marksmanship.
But I’m not going to write about the AK.

The west never developed a counter-icon with the counter-culture romance of the AK – indeed, since so much of the survival of the west involved refuting the idea of the romantic totalitarian hero, that’s completely appropriate.

But if the west did have a counter-icon, it’d likely be the FN-FAL:

Designed and built at Belgium’s Fabrique Nationale (FN), the Fusil Automatique Leger (“Light Automatic Rifle”), or “FAL” served the west from the mid-fifties until the present – although it’s been falling out of front-line service with the west’s militaries for the past 15 years or so. It’s big. It’s powerful – unlike the AK with its short 7.62x39mm “intermediate” round, it fires a full-powered 7.62x51mm round (known as “.308 Winchester” in the US).

The big difference? It’s accurate in a way the AK never could be. It’s a marksman’s rifle; while it could spray automatic fire (at least in its Belgian version; the British and Canadians adopted a semi-automatic only version, the “SLR”, from 1957 through the mid-eighties), it was way too light to use as a machine gun. It’s rugged like the AK, but it wasn’ “simple”; where the AK was a cheap specimen that could be manufactured in any third-world machine shop, the FAL was the product of old-world European craftsmanship, painstakingly machined to fairly tight tolerances.

And yet, in battle after battle around the world for fifty years, when the forces of “revolution” and thuggery took to the field with their AK47s, they were as often as not faced with troops with the FAL. As the USSR and NATO stared each other down from the fifties through the ’80s, many of the NATO troops that stared back across the border – the Dutch, the Belgians, the British and Canadians and many others – carried the FAL.
As did the US – almost:

[In US trials to replace the M1 Garand in the ’50s, the FAL prototype that the American procurement establishment called the “T48”] competed against the T44 rifle. The T44 was a heavily modified version of the earlier M1 Garand. Testing proved the T48 and the T44 comparable in performance, with no clear winner. However, the supposed ease of production of the T44 upon machinery already in place for the M1 Garand and the similarity in the manual of arms for the T44 and M1 ultimately swayed the decision in the direction of the T44, which was adopted as the M14 rifle.

The various civilianized semi-auto versions of the FAL are a joy to shoot, although they buck like mules, firing the full-power .308 cartridge from a frame that weighs only about eight or nine pounds.  Compared to heavier weapons firing the same cartridge (the similar German G-3, in its civilian incarnation as the HK91, which’ll be featured in an upcoming episode of HGF), or even the M-1 Garand with the slightly more powerful old American 30.06 round, the FAL series is a handful.

The FAL is falling out of front-line service with the world’s marquee armies; the Brits traded the SLR in for the space-age looking IW; the Dutch, Belgians and Canadians traded theirs in for more modern weapons using the lighter 5.56x45mm round developed for the American M16; the Australians, the Austrians and even the Irish traded theirs in for  the space-age looking 5.56mm Steyr AUG.  And yet the FAL soldiers on around the world, in places like India and Brazil and South Africa and, in places like Zimbabwe and Venezuela, alongside its old nemesis, the AK.
One of the great regrets of my life; at a gun show in Saint Paul in the late eighties, I found a guy unloading a British SLR semi-auto version, in the case with all the original parts, for $595. I thought about it – hard – but took a pass. I figured “I need the money for other things – and hey, there’ll be other gun shows”.

As, indeed, there were. But in the intervening time, the Stockton Massacre – where an insane man shot up a California playground with, what else, an AK) led to talk of draconian restrictions on “assault weapons”, which led the price of most such weapons to nearly triple overnight.

One of these days.