In her column over the weekend, the Strib’s Lori Sturdevant does what she’s paid to do; paint the DFL’s toenails.

Sturdevant’s column echoed the DFL’s current regimen of happy talk for the people, in obligingly noting that the current plan cuts the sales tax from 6.874% to 5.5% (before the local taxes that your city, like mine, may have larded on top of it all) while extending the sales tax to other goods and services.

Lots of other goods and services.

The DFL has to “Pay” for a half a billion dollar pay-off to renters, as well as a shopping list of goodies for Governor Dayton’s other constituents.

What Sturdevant doesn’t tell the reader:  the “broadening” will take a lot more money out of the state economy.

Page 10 of the “Budget for a Better Minnesota” shows that the net result of the changes to the sales tax will forcibly extract 2.1 billion more dollars from the “economy” (because apparently cranking up taxes on “the rich” isn’t enough to pay for A Better Minnesota. 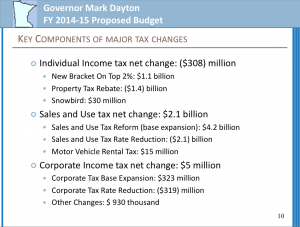 Slide Ten from the “Budget for a Better Minnesota”, Click for a full-sized version.

In terms of specific changes to specific taxes?  That’s on Page eight of the “Budget for a Better Minnesota”: 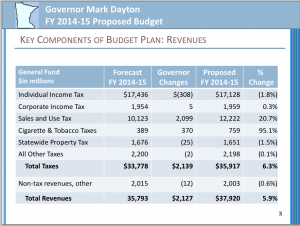 From the “Budget for a Better Minnesota”, page 8. Click for a larger view.

The Democrats’ big chanting points – “fairer” income taxes, the cuts in state property taxes – are farts in the wind.

The two big sources of revenue to pay for all of that”Better Minnesota” are, according to the slide above…

So the sales tax “rate cut” is a smokescreen to cover the fact that the state will be exacting much, much more from this state’s economy (and more still, once the cigarette tax inevitably flops).

Governor Dayton phrases this as something inevitable – and Sturdevant, like any good stenographer, passes it on that way:

But Dayton wouldn’t consider asking households to pay a tax when they hire a lawyer or tax accountant unless he asked businesses to do the same. Fairness demands as much, he argues.

“This is going to be a tough decade,” Dayton told the Star Tribune Editorial Board last week. “If people understand that we’ve got a fair system, they’re going to be a lot more accepting of what we’ll have to do” to meet a rising demand for government services while federal help shrinks.

The DFL’s had a standard dodge for that for the past forty years; “yes, you pay a lot of taxes, but they’re high quality taxes!”

He’s right: Tax fairness is important in a democracy. But competitiveness matters, too, in a place that aspires to be a player in the global economy — doesn’t it?

“Yes, but that needs to be measured in terms of value, not just taxes,” advised economist Art Rolnick, late of the Minneapolis Federal Reserve…the 50-year Minnesota success formula has been to invest in high-return “public goods” like a well-educated workforce, transportation and public safety. “We offer a great public environment,” Rolnick said. “That’s our edge.”

That’s been the DFL’s line – and, at the risk of sounding redundant, Sturdevant’s – for those entire fifty years.

But the world has changed a lot in those fifty years – and so has the upper Midwest.

In 1963, when the DFL was developing the tax policy that Mark Dayton just re-introduced with a huge arthritic groan last week, the Twin Cities were the unquestioned economic, political, educational, educational and social center of the upper Midwest.  And the United States was the world’s only functioning economy; Japan and Germany were still rebuilding; China and India were third-world nations in the middle of disastrous socialist experiments; South Korea was ravaged by war and underperforming the communist North.  Ours was the only economy that had the resources to both innovate and produce and export anything of value.   We could afford to give union workers a wage double the going rate and a lifetime defined-benefit pension!

And Minnesota was an industrial, financial and educational hub of an agrarian region.  The U of M was a big, powerful land grant research university surrounded by teacher colleges and ag schools.

Today North Dakota is kicking our ass economically – and even before Big Oil, Fargo was out-growing the Twin Cities based on medical and high-tech development.  Wisconsin’s growth (especially after adjusting for Milwaukee) is better than ours (more later this week).  And the education system in North Dakota has always rivaled and by some measures beaten Minnesota’s fabled system, at a fraction of the cost, while the University of Minnesota has become both a money vortex and a mediocre participant in the education price bubble.

And last week’s budget has more than a few businesses eyeing the environment across the borders – or around the globe.

So when Lori Sturdevant writes…:

When business folk come to the Capitol, they would do well to acknowledge that their competitive edge depends not only on how Minnesota ranks on taxes, but also on what those taxes buy.

…she, and the DFL for whom she shills, should not be in the least surprised if people start asking that.

They might not get the answers she and the Strib and the DFL have spent the last fifty years programming people to give.

6 thoughts on “Sturdevant: The Beatings Will Continue Until Morale Improves, Part II”