All through American history, there have been those who asked “what’s it all about?”

The answer, whether stated or (usually) implicit, is “to beat your opponent”.

In 1776, we had a tyrannical king and his troops to send packing.

In 1864, it was the slave-owning secessionistic southern Brahmins.

In 1945, it was the Nazis and the bombers of Pearl Harbor.

It’s the cast, creators and producers of MTV’s “Jersey Shore”. 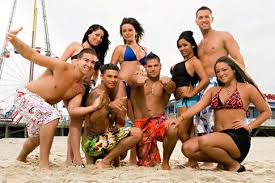 So when people like Tony Jones sound ready to give up…:

But, as far as I could tell in the 30 minutes that I watched before I could watch no more, there is no reason to watch the characters of Jersey Shore other than voyeurism. There’s no story, no character development. There is pure exhibitionism. In that sense, Jersey Shore is like pornography. And, also like pornography, it’s completely predictable what will happen: party, fight, sex, repeat.

I’m not one to proclaim the denouement of our culture or our country based on the devolution of our fetishes, but after seeing Jersey Shore, I might be ready to change my tune on that.

No, don’t, Tony.  “Jersey Shore” may well be the ultimate proof of my theory – that Mike Judge’s classic, underrated movie Idiocracy was a comedy for the social right and a to-do list for the social left – but for those of us who see better things ahead, it’s a call to action.

So you know those emotions you feel when you watch “Jersey Shore” (And I’ll cop to it; I saw three minutes of the first episode, and felt the same way)?  Don”t let them make you write off Western Civilization.

In the immortal words of Jed Eckert (Harry Dean Stanton) in that classic manifesto of flyover-land “FU” belligerence, Red Dawn – don’t let Jersey Shore get you down.  Let it turn.

Let it turn into something else.

5 thoughts on “The Harbinger”