There is evidence that John Bedell, yesterday’s Pentagon shooter, was there to P get the “truth” about 9/11:

Signs emerged that Bedell harbored ill feelings toward the government and the armed forces, and had questioned the circumstances behind the Sept. 11, 2001, terrorist attacks.

In an Internet posting, a user by the name JPatrickBedell wrote that he was “determined to see that justice is served” in the death of Marine Col. James Sabow, who was found dead in the backyard of his California home in 1991. The death was ruled a suicide but the case has long been the source of theories of a cover up…The user named JPatrickBedell wrote the Sabow case was “a step toward establishing the truth of events such as the September 11 demolitions.”

If there’s one thing I’ve learned from Dusty Trice, the City Pages and the Southern Poverty Law Center, it’s that even the most tenuous intellectual synchronicity is evidence of a shadowy undercurrent of hatred.

So – I believe the inflammatory remarks of Jesse Ventura and Minnesota “Progressive” Project’s Grace Kelly led to this shooting, and wonder when they’ll accept responsibility.

(Ever since I learned the technique of holding people responsible for things people who seem tangentially like them also happen to say, I find that I’m relieved of the usual burden of being responsible and accountable).

UPDATE:  Of course the leftyblog hamsters tried to tie Bedell to the Tea Parties. 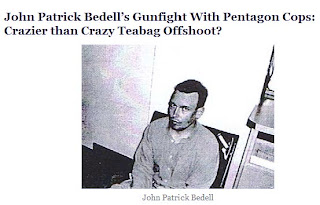 It has become pretty clear pretty quickly that Bedell sufferred from Bush Derangement Syndrome, and was a 9/11 Truther, just like 35% of Democrats as of May 2007.

So we’ve got Bill Sparkmann, Major Hasan, John Bedell, the guy who crashed his plane into the IRS office – all of them who were seemingly driven to horrendous (and/or self-immolating) acts by the rhetoric of the left…

Why, if I were a leftyblogger and the parties were reversed, I might be tempted to call it a “climate of hatred…”

8 thoughts on “Climate Of Weird”