Thirty years. The album is twice as old as I was when I first heard it. 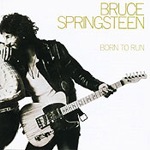 I hear the album today, and it’s still just as fresh as it ever was. If Rock and Roll is a matter of crystalline moments that still cut and shine through the tarnish of the years and the background noise of everyday life, Born To Run is the mother of all diamonds.

I remember being a seventies-addled junior high kid, watching the guy at Mother’s Records in Jamestown – the one across from the high school – drop the needle on the first copy of Born To Run I ever saw, on the one hand thinking “no way it’s better than Boston“, on the other hand looking at the sleeve – a 26 year old Bruce leaning on a 33 year old Clarence (with a Fender Freaking Telecaster Squire, in the middle of the heyday of the Gibson Les Paul, no less!), presaging the joy and tension and just plain ENERGY in the album, and thinking “Wow. That’s rock and roll”.

And then – Thunder Road:

The screen door slams, Mary’s dress sways
Like a vision she dances across the porch. As the radio plays
Roy Orbison singing for the lonely
Hey that’s me and I want you only
Don’t turn me home again, I just can’t face myself alone again

A girl! Dancing on the porch! Sign me up!

All prelude of course, to the burst of energy to come that washed over me, that shot a chill up my spine:

With a chance to make it good somehow
Hey what else can we do now?
Except roll down the window and let the wind blow back your hair
Well the night’s busting open
This two lanes will take us anywhere
We got one last chance to make it real
To trade in these wings on some wheels
Climb in back, Heaven’s waiting on down the tracks…

Bruce has done better albums (Darkness on the Edge of Town, Tunnel of Love), he’s had records that sold more albums (Born In The USA) – but no album, before or since, has ever had moments like Born To Run.

Moments – it’s a prosaic word, but in the world of Mitch, as applied to Rock and Roll, it has a very specific meaning that, for purposes of explanation, I should make clear; a “moment” is something, some tiny snippet of a song, that sends a chill up your spine, that rattles you to the core of your being. They can be huge and dramatic (Roger Daltrey’s scream in “Won’t Get Fooled Again”), or light and subtle (Susannah Hoffs’ cooing “to a perfect world” at the end of “Dover Beach”, from the first Bangles album); they can be part of a great song (the final “to bring the victory Jesus won…” in U2’s “Sunday Bloody Sunday”, the murderous guitar hooks in Big Country’s “Where The Rose Is Sown”, the bridge in Smokey Robinson’s “Cruisin'”), a mediocre one (the final coda in the Alarm’s “Blaze of Glory”, the bridges in the Babies’ “Isn’t It Time”), even a crappy one (Neil Schon’s entrance in Journey’s “Don’t Stop Believing”), it can beat you over the head (the beginning of Barry Goudreau’s blazing final solo in Boston’s “Long Time”), it can seduce you (the mournful, whispered chorus of Richard Thompson’s “Jenny”, Aimee Mann’s transclucent last line of the last verse of Til Tuesday’s “Coming Up Close”). You get the picture.

Moments are ephemeral, unpredictable. Most artists never have one (Laura Brannigan and Dee Snider searched their whole careers in vain); most albums never send a single chill up a lonely spine. A single such moment can redeem an otherwise mediocre career; the world could forget the Monkees, Roxette, 10,000 Maniacs, the Cars and Abba tomorrow, but I’d love them for a grand total of maybe fifteen seconds worth of moments among them (brief snippets of “I’m A Believer”, “It’s All Over Now”, “These Are Days”, “Bye Bye Love” and “SOS”, two-second flares of pop brilliance that are all I need). A talent for such moments – the ability to create more than one or two on a couple of albums – is a rare thing indeed, almost mythical. Pete Townsend, Ray Davies, Chuck D, Lennon/McCartney, Paul Westerberg, Chrissy Hynde (until about 1985), Bono/The Edge, Stuart Adamson, Smokey Robinson, Levi Stubbs, Aimee Mann – it’s a small, select list.

And in no album are there more such moments jammed so tightly together, moments enough to define the careers of a dozen other artists, moments that, thirty years later, still thrill and chill and drag you out into onto the Jersey Turnpike of the mind in Dad’s jalopy. None. Ever:

Born To Run is the encyclopedia of rock and roll – one moment at a time.

And thirty years later, it still crackles like static from the speakers, feeling barely controlled, throbbing with potential energy (“Backstreets'” ominous buildup) and thundering with explosive release (“Night”), careening from smokey barroom to dragstrip to rumble to backseat like one of those lost weekend evenings from your teens – or the teenage years you imagined other people having – packed into a sleeve.

Born to Run is one of those rare records that feels as good today as the day it was released; it hasn’t aged or dated itself one iota; one of those bits of art that will long outlive its creator.

One moment at a time.

(Feel free to comment – but please keep all politically-oriented criticism out of this thread. Springsteen’s support of John Kerry last year is no more an indictment of Born to Run than the Pedophile Priest scandal is a black mark on the New Testament. Politically based criticism will be gleefully mutilated).