…When the Democrats we’re concerned about the chilling effect President Trump’s criticism of a foreign service bureaucrat would have? Not withstanding that the ambassador served at his pleasure?

Speaking to a crowd on the Supreme Court steps, the leading Senate Democrat declared: “I want to tell you, Gorsuch. I want to tell you, Kavanaugh. You have released the whirlwind, and you will pay the price.” He meant Neil Gorsuch and Brett Kavanaugh, the newest Justices who were appointed by President Trump.

Mr. Schumer was speaking before abortion-rights activists as the Supreme Court considers whether to curtail the ability of abortion providers to sue on behalf of women seeking abortions—a doctrine known as third-party standing. Mr. Schumer, still addressing Messrs. Gorsuch and Kavanaugh, added: “You won’t know what hit you if you go forward with these awful decisions.”

Between all the Democrats talk of eliminating or neutralizing the electoral college, making the Senate a popular body or illuminating it, and packing the supreme court and they’re not attacking it, it’s almost as if the Democrats have not the faintest interest in checks, balances and federalism. 

Chief Justice Roberts was not amused: 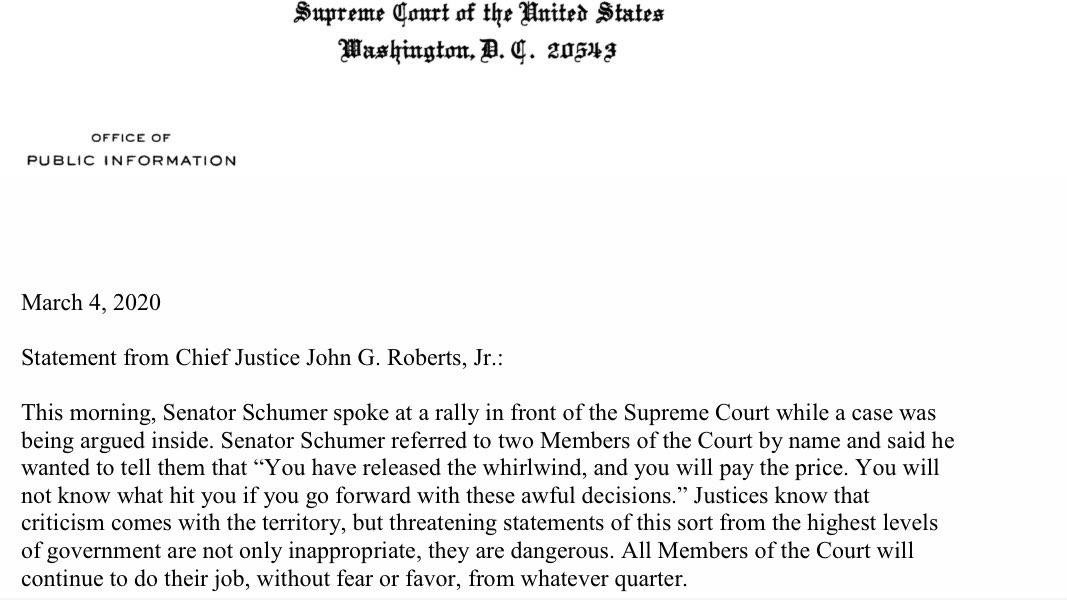 This is going to be an interesting summer.