Via Heather Wilhelm at National Review – some wag with a printing budget is disttributing stickers about Austin that tell Texans what New Hampshireites, Vermontians, Coloradans, and residents of Edina, Minnetonka, Woodbury, Bloomington and Eagan coul dhave used while there was still time:  https://www.nationalreview.com/2018/10/beto-orourke-media-coverage-embarrassing-spectacle/ 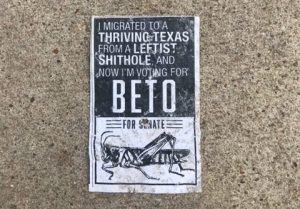 One hero in Austin has taken to posting stickers around town featuring an image of a giant locust, paired with the following text: “I MIGRATED TO A THRIVING TEXAS FROM A LEFTIST [NIGHTMARE] AND NOW I’M VOTING FOR BETO FOR SENATE.”

Change the places and the names, it’s still the same idea.

My corollary – “You snork at people for “not voting for their best interests”, apparently assuming that “our best interests” are high crime, corruption, economic decay (except for the top 5%), skyrocketing housing prices. collapsing schools and a society that falls apart under the weight of exaggerated social division.