There are a lot of heated conversations on my neighborhood’s Nextdoor about the new Minneapolis 2040 plan. Southwest Minneapolis is NOT in favor of higher density. The NIMBY principle is rising to a new high dudgeon. I posted the idea below a little bit ago on a post about some cards that are being sent out. Some critics of the plan (not me) have received the card below. I wrote a lengthy proposition to my neighbors. Enjoy.

The friend sends a posting:

If you look at my picture, you will quickly realize that I am no revolutionary. But I am in favor of local democracy which seems more and more like a revolutionary idea. Many people including me who live in Minneapolis do not want this increased density. However a growing number of Minneapolitans do want it. Have we reached a tipping point in those who do want more density? The attached flyer above shows the animosity and shaming being done to those of us who believe a healthy city will have wide swaths of single family domiciles with very few multiunit dwelling structures. 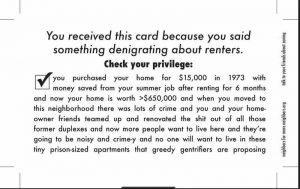 As with others here I am not very likely to be swayed by such shaming. 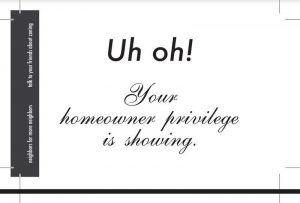 It’s not race or class it’s economics. Other people in my social circles with whom I am close have also let me know in clear terms that they are not sympathetic to keeping multiunit dwellings out of historically single family home neighborhoods. Those people clearly tell me that they have no sympathy and it is about time that our neighborhoods begin to look more like their parts of Minneapolis. All of this leads me to propose to my fellow citizens that we consider a drastic thought…seceding from Minneapolis. This is not said lightly nor in jest. But it appears it may be the only way to preserve our desired neighborhoods of single family homes. We are rapidly becoming subject to a majority who have no serious sympathy for a different point of view. Edina recently rejected some of these high density development projects. Perhaps the residents of Edina might welcome us. It would be expensive and difficult to extract ourselves from Minneapolis but for many of us, our largest asset is our home. Those asset values are at risk if our fair city decides to allow large dwellings to rise in single family neighborhoods without adequate parking, etc. Of course I have the option to move now to a city more tolerant of my point of view like Edina (in a much smaller house). Sincerely I think that Minneapolis is better off with the diversity of higher density areas and sections that are reserved for overhwhelmingly single family homes. We need diversity of thought in this city and having diversity of neighborhoods will encourage that diversity. Maybe secession is just too unpalletable to my fellow citizens or perhaps the 2040 plan is just not a big enough issue. Please save your comments on my being crazy and if you are not interested this idea will die a natural death. Is there any appetite for such a plan? Words may not be enough to convince our fellow citizens, we may need a more active protest…maybe a lawful drastic plan like secession.

I love the idea of seceding from Minneapolis.  Or trying.

But Minneapolis is full of people, like Saint Paul, who whinge about DFL policies that impact them badly – and there are a zillion of them in both cities – and yet would never dream of voting for the opposition.

Until that changes, I’m dubious anything can happen.

I’d love to be surprised.

11 thoughts on “Homeowner Privilege. No, Really.”