The CD8 DFL had a very long convention on Saturday,  After ten ballots, everyone promised to go to the primary.

The unusual thing?  The DFL trucked a bunch of Latino activists from the Twin Cities to canvass for the Metro DFL’s chosen candidate.

Phifer, a college professor who previously worked at the Federal Bureau of Investigation and federal Immigration and Customs Enforcement, initially entered the race to challenge incumbent DFL Rep. Rick Nolan.

When Nolan announced his retirement in February, Phifer had the advantage of a five-month head start over the four candidates who jumped into the race afterward. It showed on Saturday: her blue-shirted supporters were a vocal presence in the convention hall, and she got the most votes of any candidate on each of the 10 ballots.

But Phifer’s background as an ICE employee revealed a deep rift on immigration: members of the Latino DFL Caucus protested her candidacy and urged delegates to reject her in a speech from the floor, one of the convention’s most dramatic moments.

Which leads us to the sort of unintended comedy that makes me love the Metro DFL so much.  Alondra “The Brain” Cano, tweeting (what else) about a Duluth DFLer’s response to the fllood of – I”ll emphasize this – non-CD8 ringers – with the sort of club-footed fake victimization that’s become her trademark: 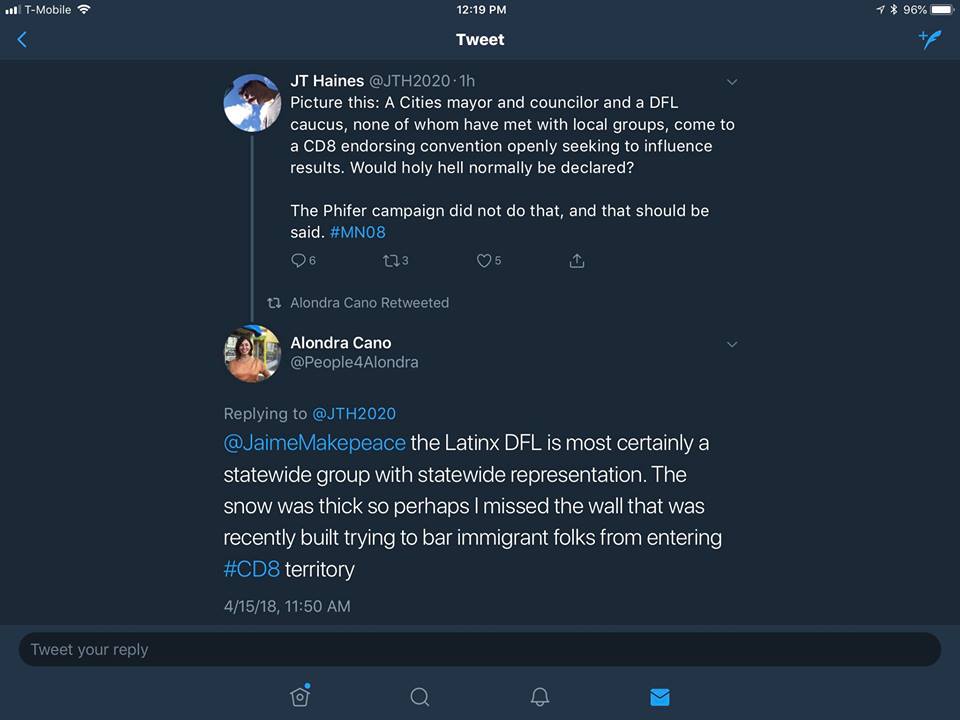 Don’t you just love it when elected members of a one-party autarchy with boundless political privilege and power unimaginable to regular schnooks start whining at other people with similar Urban Progressive Privilege about what victims they are?

13 thoughts on “The Progressive Cage Match”