The aging Emperor Franz Joseph of the Austro-Hungarian Empire had been confined to his bed for several days.  The 86 year-old monarch, who had reigned for nearly 68 years, had caught a cold that had developed into pneumonia.  While Joseph’s participation in the day-to-day affairs of state had been significantly curtailed for years, the Empire still waited nervously for updates on the monarch’s conditions.

Franz Joseph’s empire had been beset with ethnic divisions for decades – the Austrian monarchy had become the Dual Monarchy with Hungary under his watch.  Yet Joseph remained a popular, unifying figure for all the ethnicities under Habsburg rule.  Bismarck himself had noted many years earlier that despite the nationalist squabbles of the nation, “if Kaiser Franz Josef should mount his horse, all his people will follow him.”

On November 21st, 1916, Franz Joseph died.  The glue of the Austro-Hungarian Empire had faded away. 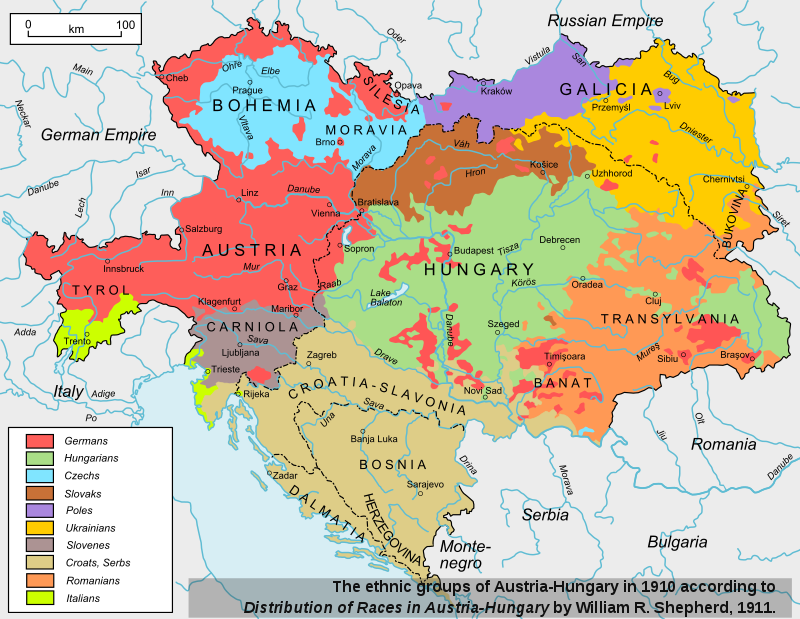 The outlines of the demographics of Austria-Hungary, circa 1910.  It’s easy to see the beginning traces of the states that would follow in the Dual Monarchy’s fall

The narrative of the final years of Austria-Hungary was of a rising tide of nationalist fervor overtaking a polyglot empire.  And most assuredly, the Habsburgs presided over one of the most diverse kingdoms of Europe.  Austrians, Germans, Italians, Ukrainians, Hungarians, Croats, Serbs, Poles, Czechs, Romanians, Muslims, Jews and others made the Dual Monarchy their home, with the empire recognizing 10 different ethnicities in their 1910 census.  With the rise of ethnic-based states like Serbia, observers from both outside and within the Empire wondered how unified Vienna could be in the event of war.

The Empire’s neighbors had spent years attempting to exploit the nation’s potential divisions.  Russia, Serbia and Italy each employed propaganda to encourage their own ethnic comrades to rise up.  At worst, the Dual Monarchy could be destabilized.  At best, disputed territories might break away from Habsburg control.  The fear of open rebellion was a constant preoccupation for the Imperial and Royal Army (Kaiserlich und Königliche Armee) – but it would become an excuse and self-fulfilling prophecy for Austro-Hungarian authorities once the war began.

Franz Joseph was used to the specter of revolution – he had become Emperor during one. 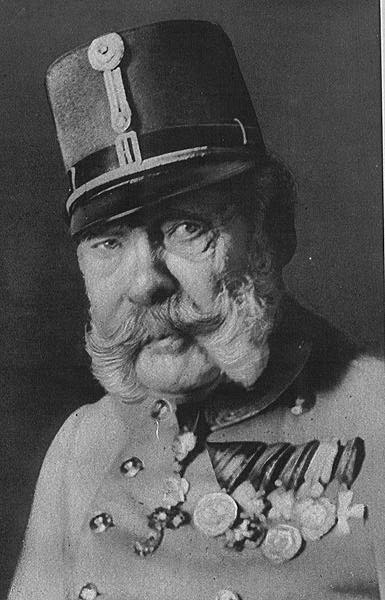 The anti-monarchal, pro-nationalist wave of revolutions in 1848 engulfed nearly all of Europe.  The victories of absolute monarchies in the Napoleonic Wars had briefly contained the passions of democracy, nationalism and socialism among the various European kingdoms.  But as most of the monarchies refused to implement even minimal social or political reforms, protests turned to riots, which turned to revolutions.  From Poland to Brazil, revolutionaries rose up against the ancien régimes.

In the Habsburg Empire, recession and food shortages exacerbated the military situation of Vienna trying to put down Italian revolutionaries.  After repeated clashes between the relatively liberal Vienna Diet and the conservative Chancellor, Klemens von Metternich, the Chancellor resigned, setting off a series of short-lived governments as the feckless Emperor Ferdinand I dithered.  In response to Vienna’s dysfunction, numerous ethnic groups rose up to announce their independence.  The Empire’s days appeared to be numbered.

Franz Joseph had been named after his great-great uncle, Emperor Joseph II, in part as an allusion to Joseph II’s reputation as a reformer.  The newly installed 19 year-old emperor had no intention of make long-term concessions to the rebelling revolutionaries, rather, he made promises of constitutional reform that disappeared once the Habsburg armies had been victorious.

Joseph would preside over a slow decline in the Empire’s grasp, losing multiple wars that would pave the way for Italian and German unification, as well as the rise of the Hungarian crown.  But the concessions Joseph made at the expense of Habsburg power greatly increased his own influence within the Empire.  The Emperor may not have a dynamic reformer like his namesake, but Joseph came across as a reasonable monarch who respected and trusted the Empire’s numerous ethnic groups.  It was a viewed not shared by Joseph’s officer corps.

Any fears that the Dual Monarchy’s minorities would not rally to fight seemed misplaced upon the nation’s declaration of war on July 28th, 1914.  Massive rallies across the Empire celebrated the fight to punish the Serbian nationalists who had assassinated Franz Joseph’s heir, Franz Ferdinand.  The Austro-Hungarian populace loved Ferdinand for his willingness to expand the crown to the Slavs – a concept which Joseph was strongly against.  Joseph hardly wept for Ferdinand’s death, privately stating “for me, it is a relief from a great worry.” Franz Joseph meets with the families of fallen soldiers. Even with the hardships of the war, the Emperor remained popular

There had been no significant issue with any of the minority groups being led off to war – at first.  While not all the ethnicities of the Empire may have fully understood the larger root causes of the conflict, they did understand that the Empire’s predominately Austrian officer corps didn’t trust them.  Communication between officers and their men was fraught with difficulty – both literally and figuratively.  As Austro-Hungarian losses mounted, and more and more men were being rushed through training, the relative lack of skill of the new conscripts was compounded by various language barriers.

By 1915, the Dual Monarchy’s officers were increasingly blaming minorities for their failures in the field.   It was a self-fulfilling prophecy.  The dissolution of two Czech-based units on trumped up claims of cowardice in the spring of 1915 poisoned relations within the military.  Ethnic unit protests of the inhuman conditions at the front slowly began to morph into protests at their general treatment by the army.  Worse, there was no mechanism for the Empire’s minorities to vent their frustrations – Joseph had suspended the Diet before the war – and the old monarch appeared woefully out of touch.  Joseph was rapidly becoming like his predecessor, and like Ferdinand I, questions of his mental fitness arose. It’s an Austro-Hungarian call for participation in another war loan, but also a not-so-subtle subtext for unification in an increasingly divided nation

Seeing no future in lobbying the old Emperor for concessions, more and more nationalist political leaders worked to curry favor with the Entente.  Poles, Hungarians, Czechs and Slovaks all reached out to London and Paris for recognition and with the exception of Hungary, the other listed minorities all formed volunteer fighting forces that served the Entente.  The number of recruits for such units were dwarfed by the participants for the Empire – the famed Czechoslovak Legion of the Entente contained 80,000 men, while an estimated 1 million Czechs fought for the Austro-Hungarians – but they served an invaluable propaganda role.

By the time of the Brusilov Offensive in the summer of 1916, Austria-Hungary’s minorities were exhausted.  They had been under-trained, under-supplied and overly blamed for the Empire’s military failings.  Coupled with the low pay and lack of family benefits, men started to desert.  The Kaiserlich und Königliche Armee ascribed the losses to the treasonous attitudes of their minority soldiers.  In many cases, men simply went home to try and provide food for their starving families.

The soldiers of the Austro-Hungarian Empire were no different than most of the combatants in the war by the end of 1916 – they weren’t interesting in fighting for anyone, even Franz Joseph.

With Franz Joseph’s passing, Karl Franz Joseph Ludwig Hubert Georg Otto Marie became Charles I and Emperor.  Charles I had only become heir with Franz Ferdinand’s assassination, and despite the old Emperor’s health, little had been done to prepare Charles for the title he now inherited.

Charles immediately began to press for a Croatian crown to be added to the Dual Monarchy – a potential check against the interests of the Hungarians.  Failing to secure Hungarian support for the concept, Charles then turned his attention to attempting to negotiate an end to the war.  The Brusilov Offensive had made Vienna completely dependent upon Berlin.  If the war could not be brought to an end soon, the Empire would likely fall. Charles I at Franz Joseph’s funeral. Charles I would actually be known by several names, including Emperor Karl (as Karl was his given name) and Charles IV, King of Hungary

The feelers for a negotiated end to the war weren’t surprising – even Germany made some outreach in the fall of 1916.  But Charles was willing to end the war with or without his ally.  The Emperor’s private correspondence to the Entente was made public in the spring of 1918, straining the Central Powers’ alliance to nearly the breaking point.  A humiliated Charles would slink into the background of the war, emerging only right at the end in another desperate attempt to strike a deal with the Entente to allow the Empire to continue in the form of a confederation of the various ethnic independence movements that had arisen.  The Entente had already struck their bargains with the rebelling groups – there would be no saving the Habsburg Empire.

Charles would find himself in exile on the Portuguese island of Madeira after the war – in essence a prisoner of the Allies who wanted to make sure he never returned to Austria or Hungary to take up his hereditary crowns.  Penniless, Charles would die in 1922.  He was only 34 years old.