Welcome, Instapundit Readers!  Thanks for stopping by!  By the way, one of Glenn’s commenters referenced “Berg’s Law” – here they are. 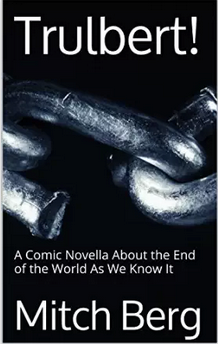 The book asks the rhetorical question “What if the world shrugged before Atlas did?”

What if every Libertarian purist, every anarchist, everyone who ever walked out of an IRS audit, got their fondest wish, and – poof – government disappeared overnight?  What would happen?

Would the world spontaneously sort itself into a functioning order, and society – now the assortment of individual, autonomous bits of pure reason that some of the Founders dreamed of – prosper and be perfectly happy?  Would mankind spontaneously order the world into the Best Possible one?

Or would the baser impulses of human nature – laziness, demagoguery, evil, or unfamiliarity with the works of Ludwig Von Mises – rot the utopia from the outside in?

The book takes place from the perspective of a group of neighbors in South Minneapolis:

Together, these people and a cast of thousands navigate a world where the old assumptions are as obsolete as an iPhone 3, and are changing faster than Google’s definition of “evil”; a world with simultaneously no authority and infinite power.

A world pretty much like ours, only upside down.

Trulbert:  A Comic Novella about the End of the World As We  Know It is available for pre-order today and tomorrow, and will be released on Amazon on Monday!

8 thoughts on “Trulbert: A Comic Novella About The End Of The World As We Know It”