In my heart, I’m still a rock and roll musician.  The urge to start another band – if only for the fun of it – someday still lurks deep in my heart.

So when I was walking up Wabasha in downtown Saint Paul back around the end of March, by the Amsterdam Bar, and saw a poster for “Katrina, formerly of The Waves” doing a show on April 4, the idea of actually seeing it flashed briefly, then went out.

And then I stopped, and turned around, and looked at the poster.

And thought “why not?”

And so when I got home, I got on Ticketfly, and ordered a ticket.  And thought; “how do I do club concerts anymore?

Going Down To Uppertown To Do Nothing:  We’ve talked about Katrina and the Waves; their past as a “one hit wonder” that shouldn’t have been here in the US, combined with a slew of really excellent pop music that had a bunch of hits in Canada and Europe.

Of course, the Waves broke up in 1999, after a brief comeback in 1997 in the UK; their lead-singer, the iron-lunged Katrina Leskanich, has had a spotty solo career since then.

So I figured why not?

Red Wine And Jack Daniels:  I’d never been to the Amsterdam before (at least not since it was “Pop”, back around 2010-ish).  The front of the house – the bar and restaurant – is “bohemian” with an uptown sheen.   The back of the joint – the “Hall” – affects “rock and roll club”, all black and worn and rough-hewn, without the whole “sticking to the seats” and “getting pounded by bouncers” experience that the real thing always gave you back in your twenties.

I got there late; I missed the first act, and caught the last two songs of the mid-card act, “The Flaming Ohs”, a band I first saw during Ronald Reagan’s first term, and didn’t like much during the second (and only two of whose original members are still alive).

I was a little gratified to notice that on this, my first venture back to a club in 12 years, I was actually right around median age; lots of forty and fiftysomething fans turned out for this, the band’s first stop in the Twin Cities since Mikhail Gorbachev was in power.

Walking On Stage Light: The surest sign everyone involved had grown up?  The band got onstage promptly at the advertised time, 9:50:

I started taking a selfie at 9:50; as i was trying to get the light right, Katrina walked on stage. Yep, that’s her.

And they were on! 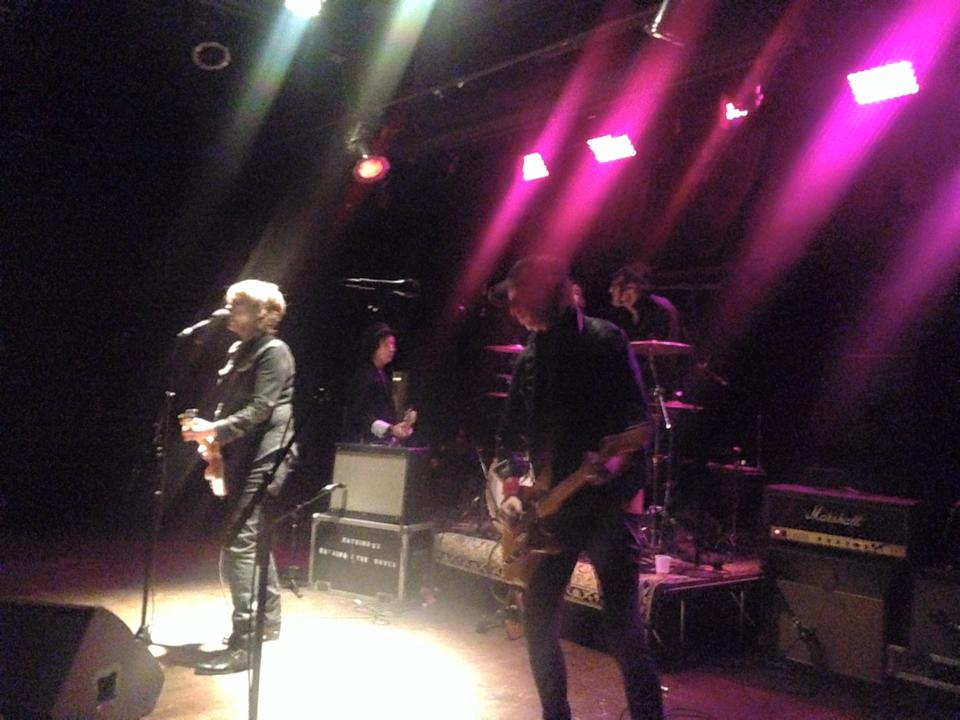 The setlist was concise, and actually a pretty decent mix of crowd faves from the eighties and Katrina’s new stuff (or, for all I know, stuff from after 1988; let’s be honest, I didn’t pay that much more attention to them than anyone else…): 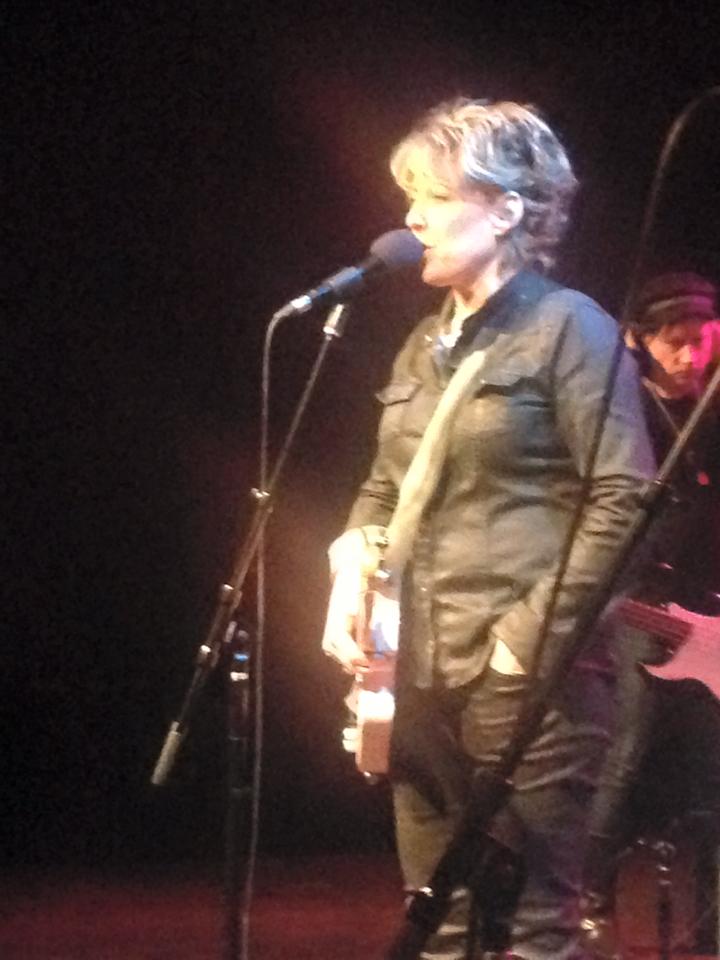 Katrina, during some between-song patter.  Turns out she’s working on a book on diners – and she’d never heard of Mickey’s Diner.  Some had dragged her over there after she’d gotten into town from Milwaukee earlier in the day Saturday.  She approved.

Cry To Me:  Katrina is not Katrina and the Waves.  That’s neither and both bad and good.

Comparing the material from her post-Waves albums, it’s easy to see how the
Waves-era material benefited from being a team effort (“Walking on Sunshine” was written by Waves guitarist Kim Rew; “Do You Want Crying” by bassist Vince De La Cruz).  A team effort that catches a stray bit of fire, like the Rew/De La Cruz/Leskanich efforts did for couple of glorious years in the eighties, is a rare and largely very focused thing.

The newer material is all over the map; “Texas Cloud” sounds like one of the ZZ Top songs that Leskanich performed in cover bands before the Waves made it big; “Sun’s Coming Upper” was moody and introspective and a big swerve from the stuff that put the band on the map.

I went there expecting a musical roller coaster ride; most gigs from musicians that have been and out of the public eye for a generation are.  The muse is a fickle critter.

The band – journeyman session drummer Kevin Tooley,  guitarist Jimi K Bones (of one of later-era versions of Joan Jett’s Blackhearts, as well as Kix),  and bass player Sean Koos (another former Blackheart, among many other bands) was actually a lot tighter than I’d ever seen the Waves;  they took what could have come across as a Holiday Inn lounge nostalgia act and made it crackle with energy. 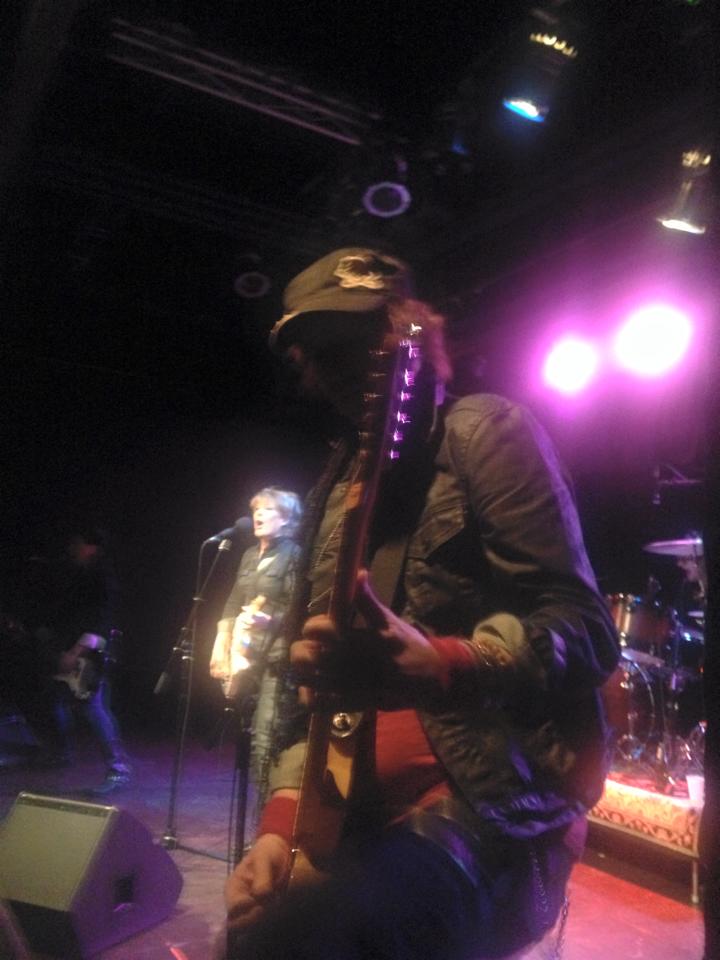 And that was by no means a given; the show at the Amsterdam was the final stop on a fifteen-gig tour that started Saint Patrick’s Day in New York.  And for bands that aren’t currently lighting up the Top Forty, that means road travel, not flying, for the most part.

Second sign that everyone had grown up in the past thirty years?  The show was over not too terribly long after 11, and most of the crowd hit the doors; there was no chanting for an encore.

Which meant it was a nice, relaxed little group that greeted Leskanich and the rest of the band when they came out into the hall about half an hour later.  I got a chance to talk rock and roll history with Bones, and tell Leskanich how much I’d enjoyed her music.  Nothing major, just fun.

Bonus Track:  Here’s Katrina, with the Waves and a little help from Eric Burdon, doing maybe the coolest cover of “We Gotta Get Out Of This Place” I’ve heard, including the Animals’ rarely-heard original lyrics, from the ancient TV series “China Beach”:

3 thoughts on “No Waves”