For weeks, minesweepers had combed the vast expanse of the ocean to the south of Luzon, the major island in the Philippine archipelago.  Filipino guerrillas had begun operating in the open in the south of the massive island, and the Japanese had even heard reports of paratroopers and gliders operating in the nearby countryside.  U.S. warplanes constantly bombed Japanese positions in southern Luzon.  The location of the Allied invasion of Luzon seemed obvious.

It was all an elaborate ruse.  The “paratroopers” were dummies.  The guerrillas, minesweepers and bombers – diversions.  The real target for the start of the liberation of the Philippines was further north, at Lingayen, far to the north of Manila.  And unfortunately for American landing troops on January 9th, 1945, the Japanese had not been fooled in the slightest. He Returned: MacArthur wades ashore Leyte in Oct of 1944. Luzon, the main Philippine island, was viewed publicly as the “real” start of the liberation of the country – a liberation most of the U.S. command fought against conducting

Had U.S. Pacific Commander Admiral Chester Nimitz and Chief of Naval Operations Admiral Ernest King gotten their way, no one would have landed on Luzon – or probably anywhere else in the Philippines.

By the end of August of 1944, American forces had completed the capture of the Marianas island chain, providing a natural staging point for the bombing campaign against Japanese cities and any future Allied invasions.  Coupled with the Battle of the Philippine Sea that June, otherwise known as the “Great Marianas Turkey Shoot” which saw 3 Japanese aircraft carriers sunk and 645 aircraft destroyed, the lingering threat of the Japanese surface fleet had all but completely eliminated.  With the home islands now being targeted and American submarines prowling Japanese shipping lanes, the stage had been set to decimate Japan’s supply chain and war-time industries. 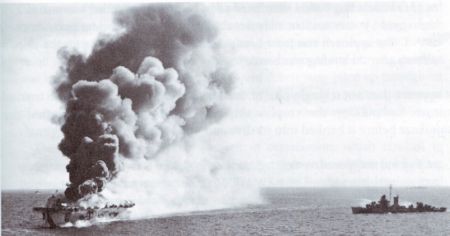 The light aircraft carrier Ommaney Bay: hit by a kamikaze in the run-up to the Luzon invasion – the ship sank

An invasion of the Philippines now seemed more out of a point of American pride than military practicality.  Gen. Douglas MacArthur may have claimed “I shall return” as he abandoned the disaster of his Baatan defense in early 1942, but his military strategy up until now had been based upon isolating and bypassing stronger Japanese defenses in favor of attacking the Imperial Army at their weakest or only most strategically important points.  With the exception of Manila Harbor, the Philippines met neither definition.

Awaiting American troops, and nearly 260,000 Filipino rebels, were almost 260,000 Japanese soldiers (of among nearly 400,000 in the Philippines).  These were veteran troops led by arguably one of Japan’s best ground commanders – Gen. Tomoyuki Yamashita.  Known as “The Tiger of Malaya” to the British for his swift conquest of Malaya and Singapore (Yamashita’s 30,000 men killed or captured 130,000 Commonwealth troops), Yamashita was a curious Japanese officer for the era.  More willing to be cunning with his men than waste them in suicidal attacks, he was an odd choice for the sort of “to the last man” defense Tokyo had envisioned.  Yamashita also didn’t care much for the bushido code of the Army.  While several massacres occurred in Malaya under his command, he tried and executed the officers responsible.  Even he apologized to civilian survivors. 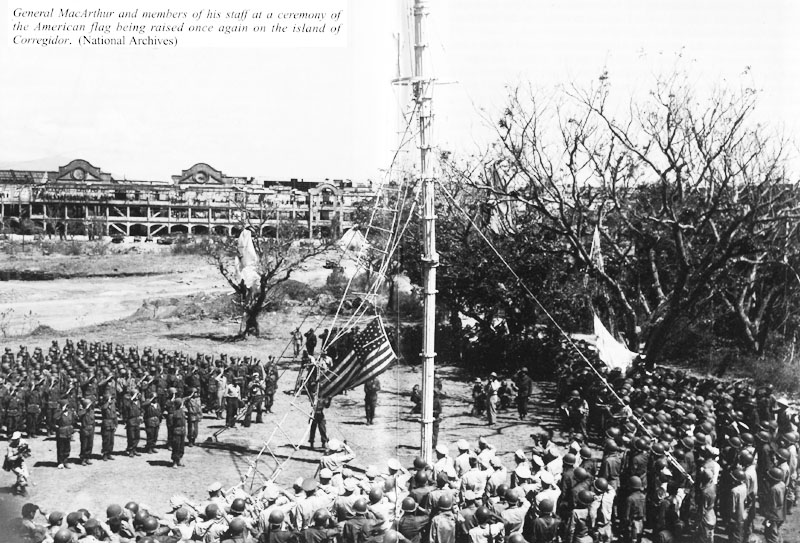 The American flag returns to the island fortress of Corregidor. 8,300 U.S. troops died on Luzon, among the 14,000 killed and 48,000 wounded in the fight to liberate the archipelago

Yamashita had anticipated the invasion at Lingayen.  Yamashita was not planning on making the same mistakes as MacArthur did in 1941/42 – he knew the real value on Luzon was Manila Harbor.  Yamashita concentrated his forces outside of the city, digging in with massive concrete bunkers and trenches.  At his disposal were hundreds of Japanese tanks and heavy artillery.  If the Americans arrived where he thought, he knew he could turn Manila into a bloodbath.

That didn’t mean Yamashita was willing to let the U.S. land unopposed.  Frantic kamikaze attacks sank the light escort carrier Ommaney Bay and several other warships.  A desperate nighttime attack against the American beachhead with torpedo boats saw 70 ships launch a suicidal operation with little success.  The Americans were now on Luzon and weren’t going to be turned back.

The invasion coincided with not only major air attacks against Japanese transportation, but a large-scale uprising of the Filipino population.  The Japanese occupation of the islands had been among the cruelest of the war, as the Filipino population remained fiercely independent.  Japanese control of the islands had been tenuous at best.  A post-war analysis suggested that at the height of their power, Japan only controlled 12 of the 48 provinces that made up the islands.  Only the internal divisions of the resistance movement (277 different groups) kept it from being more effective.

Filipino rebels weren’t the only other Allied troops to participate at Luzon.  The Fuerza Aérea Expedicionaria Mexicana or the Mexican Expeditionary Air Force ran 59 operations against the Japanese in Luzon, with an efficiency rate of 85% to the loss of only 5 pilots.  The Mexican Senate had authorized the combat actions of the unit only days before, at the end of 1944, and to this day still has the distinction as the only Mexican combat unit to see action outside of the country.

Members of the Fuerza Aérea Expedicionaria Mexicana – the Mexican Air Force, which participated in the battle. Led by General Antonio Cárdenas Rodríguez, the unit has the distinction of being the only Mexican Armed Forces unit to fight outside of the country in Mexico’s history

The initial American drive towards Manila moved slowly.  In an effort to divert Japanese forces from the expanding American beachhead, on January 15th, the U.S. landed more troops to the south of Manila.  Now being pressed close to the capital, and with the original landing troops at Lingayen threatening his army’s ability to escape to the mountainous northern provinces, Yamashita threw his forces into a furious counterattack, only to see his troops chewed up by American air assaults and armor.

Realizing that his troops had a better chance on the defensive, and that any hope of repealing the Americans had failed, Yamashita ordered his men to retreat while throwing his one armored unit, the 2nd Armored Division, into a frontal assault to buy time.  The 2nd Armored was one of only 4 armored divisions in the entire Japanese army, but their lightly armored tanks were little match against American Shermans.  The 2nd Armored was quickly routed, and for the rest of the battle for Luzon, the U.S. alone had armored support.

By February 4th, Manila had been surrounded, prompting MacArthur to foolishly declare that the city had “fallen” to the U.S.  In reality, the battle for Manila had just started, with ghastly consequences for the Filipino civilians still inside.

A Japanese soldier stands over dead civilians: the Japanese massacred over 100,000 Filipinos in Manila a month after MacArthur declared Manila to have “fallen.” The city, once called “the pearl of the Orient,” was devastated

In 1941, MacArthur had declared Manila an “open city” in an attempt to spare civilians from a house-to-house campaign.  The Japanese had no such problem.  Yamashita hadn’t intended to defend Manila itself (he knew he couldn’t afford to feed a city of one million people and his army), and had ordered the army to abandon the city in an effort to regroup in the north – Yamashita didn’t have much use for suicidal gestures; he would rather keep his army standing.  But as Yamashita’s troops withdrew, Imperial Japanese Navy Rear Admiral Sanji Iwabuchi’s remaining naval troops entered Manila, setting up defensive positions. Japanese troops surrendering: over 12,500 Japanese troops actually surrender during the broader Philippines campaign. Still, over 50,000 continued to fight on Luzon until the end of the war

MacArthur declared the Philippines “liberated” despite the months of additional combat to come.  Yamashita’s remaining men would hold out in northern Luzon until the end of the war, surrendering with 50,000 men still at arms.  But the Philippines had been a Japanese graveyard, as 336,000 soldiers were killed (205,000 of them on Luzon).  It was the worst defeat in Japanese history by massive proportions.  The defeat of the Japanese 15th Army that July in India had previously been the worst, and that was “only” a loss of 60,000 men.

The Philippines also saw the limits of Japanese endurance.  Whereas just months earlier, a mere 202 Japanese soldiers had surrendered out of a garrison of nearly 14,000 on Peleliu – the rest choosing death or suicide to being a POW – 12,500 Japanese troops had surprisingly surrendered on Luzon.  Despite Tokyo’s hopes, and Nimitz and King’s fears, American losses on Luzon were minimal by comparison – 8,300 killed and 29,000 wounded.  But 14,000 Americans had been killed in all the combined operations in the Philippines.  Success in the Philippines didn’t kick-off a series of campaigns against nearby targets like Formosa, China, or the Dutch East Indies.  Thus, it was a somewhat hollow strategic victory. The Trial of Tomoyuki Yamashita: the commanding general on Luzon, Yamashita was held responsible for the war crimes of his troops. Yamashita was amazed at the vigorous defense his American defense team conducted to try and avoid his execution. He was nevertheless found guilty

Despite his past history, and the fact that his orders had been disobeyed regarding the defense of Manila, Tomoyuki Yamashita still went to trial for war crimes.  At the heart of the case was whether or not Yamashita should or could be held responsible for the actions for his subordinates.  There was no evidence Yamashita planned or condoned the Manila Massacre, nor was there any evidence he could have prevented it once it started.  Yamashita was surprised how vigorously he was defended by his American military legal team.

Yamashita was found guilty and executed on February 23, 1946.  The sentence sharply divided military and legal opinion, the former believing Yamashita was responsible while the latter claimed the proceedings as more show trial than tribunal.  Among those who accepted the verdict were Yamashita himself, who stated that the trial had been conducted with “kindness and right.”  His trial would have implications far beyond his execution.  The standard of command accountability started with Yamashita’s trial is now part of the Geneva Convention and has been used in relations to war crimes in the former Yugoslavia.