To:  Valeria Silva, Superintendant, Saint Paul Public Schools
From: Mitch Berg, Uppity Peasant
Re:  How You Can Superintendantsplain Things To Your Black Students

In the immediate aftermath of the Ferguson Grand Jury release, you tweeted: 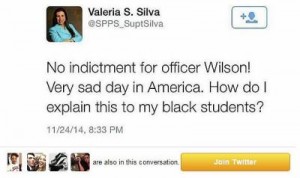 No indictment for officer Wilson!  Very sad day in America.  How do I explain this to my black students?

I’m here to help.  You can start by explaining to them…:

Let me know if you need more help.  Being a public bureaucrat, I’m sure you rarely have to deal with the actual public.