And, in a sense, why I’m a conservative.

Yesterday was a double-anniversary in Germany; the fall of the Wall, and of Kristallnacnt, the 1938 pogrom that marked the active, public advent of the Holocaust, during which Jews, unarmed by force of law, were beaten, brutalized and murdered, their shops and homes ransacked, and the value of a Jewish life set at “lower than dog”.

Some Second Amendment activists note that Germany had strict gun control.  Anti-gunners chirp that guns were legal in Germany.  Second Amendment activists who’ve actually read the history respond that yes, Germans could own firearms – but they were closely registered.  And when the Nuremberg Laws banned guns in the hands of Jews, the Germans knew exactly where to go to find them.

Just as they do with every community of desired victims around the world:

And that is precisely the point the Real Americans are making; “gun control” doesn’t so much “control” “gun violence” as it redistributes the capacity for lethal force away from unfashionable minorities.

And law-abiding black people in places like Chicago, Camden and Detroit are largely disarmed.  And at the mercy of the criminals among us.

Which is, of course, the goal. 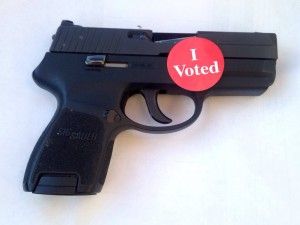 So that’s why, even before I voted Conservative, I voted Second Amendment.