There was no more dismal period in any genre of American music than country music’s ordeal from about 1975 to about 1990.

Pushed by Big Nashville’s urge to cash in on the big money in pop music, “crossover” was the watchword and goal and driving force behind Nashville’s main efforts during that whole stretch of time.  Some country artists – Kenny Rogers and Eddie Rabbit and Barbara Mandrell and a whole lot of equally-forgettable tripe – existed purely to capitalize on the trend.  The trend swallowed up years from the careers of some otherwise great country artists; who knows what could happen if Dolly Parton could get the years back that she spent trying to be a pop star?

And some of the best country music of the era – indeed, some of the genre’s only music of the era that anyone has reason to remember – was specifically done as a reaction to that whole noxious trend; “The Outlaws”, Willie Nelson, Hank Williams Junior, Waylon Jennings, Emmylou Harris, Rodney Crowell and a few others who stuck to and extended on country’s twangy roots, were about the only products of the era worth remembering.

Lee Greenwood was very much in the former group. 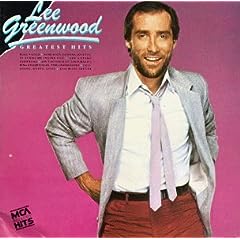 Is he country?  Is he Vegas?  Is he new wave?  He’d just as soon you not worry about it!

Having worked in Country radio a few times – in 1982 and 1984 and 1991-92 – I can remember what an utterly dismal thing country was, in that wretched era before Garth Brooks and Patty Loveless and Dwight Yoakam and Holly Dunn and the whole crowd of “back to the roots” singers paradoxically made country a colossal success by dragging it “backward” twenty years.  Lee Greenwood had been one of the big offenders, doing treacly, overproduced glop whose only connection with “country” was a little arklahoma twang in his voice and, of course, a relentless tugging on the heartland’s heartstrings.

Which is what gave us “God Bless the USA“.

And make no mistake about it; “GBTUSA” has everything that made Lee Greenwood such a lowlight of “country” music for that entire dismal period of time; lots of violins, but nary a fiddle to be found; electric guitars, but none of them pedal steel; lots of vocals, but the most generic voice imaginable.  That cloying sense that the song is trying hard to push every button you have.

Perversely, though?  It works.

Well, maybe not for you.  Indeed, as John Edwards once said whilst running between a hair appointment and a date with his mistress, there are two Americas; one that hates “God Bless The USA” and is mildly creeped out by everything it stands for, and another that may or may not be silently amused by the song, but still gets a thrill in its heart from all of its glorious, mawkish sentiment.

And it is gloriously, over the top mawkish; if your heartstrings aren’t rated for 2000 points of pull, they will snap like Nancy Pelosi’s facial muscles when someone pops a paper bag behind her.

But aside from being perhaps a perfect lab experiment showing the absolute limits of emotional button-pushing in song, the song has been adopted – intentionally or not – by that second America, as a sort of huge, glowing middle finger aimed at the first one.  Because when Greenwood and his background singers – it could be the Red Army Choir, for crying out loud – wind up and attack that last big finish, it challenges you not to say “Yes, Chauncey Boston-Cosmopolitan, the idea of America transcends its problems; the promise of this experiment supercedes its mistakes; it is a concept deserving of loyalty for its own sake; we are a shining city on the hill, and we are the best attempt at a nation that this world has ever seen, viewed objectively and ethically.  You have the right to disagree – but in the meantime, shut your impotent babbling pseudointellectual piehole, because I’m gonna sing and wave the flag for a moment”.

A symptom of obstinate, unthinking jingoism?  A thud-witted rejection of the reflexive dialecticism that “educated” Americans are supposed to embrace (and which many do, most of them with little more literacy than the most jingoistic redneck), that believes to every good there must be an equal yet opposite evil?

But let me say in response that there ain’t no doubt I love this land.  And, in conclusion, God Bless the USA.  Or, as the kids today say, “America; F*** Yeah”.

There. I believe I settled that.