As a general rule, the “gear” is either musical instruments or firearms.  Johnny Roosh used to do other stuff – razors, motorcycles, the like – but i’m more narrowly focused.  Also, guns and music gear are about the only hot gear I ever deal with.

The other rule was, the “hot gear” I feature was stuff I’d actually used, played, fired, or even been in the same room as.  Which narrows things waaaa-aaaaaay-hey down.  I’ve led a fairly boring life, in terms of toys I’ve gotten to play with.

But things have been moving slowly forward in recent months.  And so it’s time to exhume the feature, at least until I run out of hot gear to write about.

It was almost 100 years ago that World War I began.  At the begnning of the war, the average infantryman was armed with one of the classic bolt-action rifles; the German Mauser, the Austrian and Italian Mannlicher-Carcano, the Russian Mosin-Nagant, the British Enfield, the French Lebel, the American Springfield (itself basically a Mauser knockoff).

World War 1-era Enfield “SMLE” rifle – relatively small and light by the standards of the day.

The “machine gun” in its semi-modern form was a fairly new thing, a water-cooled brute (in most cases) weighing in at about 80 pounds without the heavy tripod (or wheeled carriage), firing a full-power rifle cartridge – a 30-caliber (7.5-7.7mm) round capable of taking down an elk from 1000 yards.  They were big, and heavy, and a pain to lug around, and as Europe marched cheering off to war in August of 1914, their armies were supplied with machine guns at a rate of about two per battalion (of about 700 men), or roughly 24 per division of 14,000 men. 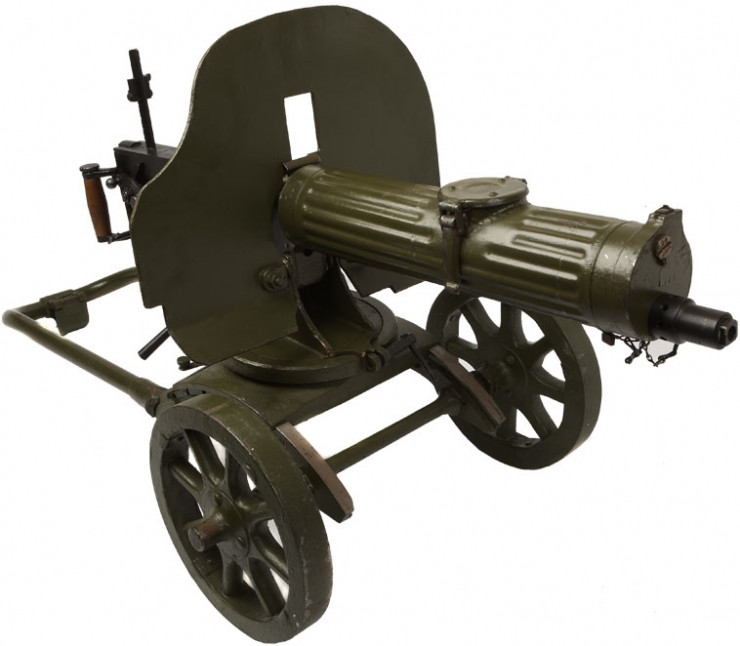 And as the war of maneuver on the Western Front quickly devolved into a trench stalemate, firepower quickly eclipsed mobility as the most important factor in the infantryman’s life.  The number of machine guns skyrocketed; most battalions had a platoon of 4-8 of them, with an extra battalion of 24-32 at the division level.

But they were still heavy – and while “mobility” had become a theoretical construct by 1915, theorists still paid the concept enough lip service to realize that infantry needed firepower – but it needed to be light.

American John Lewis, working for the Brits, designed the “Lewis Gun”, a 30 pound brute fed from a 47 round spring-loaded drum, that was the world’s first widely-issued “light machine gun”.   It was a theoretically very advanced weapon – the muzzle blast drew cooling air in through the back of the jacket and over the barrel cooling fins, theoretically keeping the barrel cooled off – but it was painfully unreliable.  But it started the ball rolling; at 30-odd pounds (empty), it weighed about quarter of a water-filled Vickers gun on its tripod.

A Lewis Gun in British service in World War 1. The Lewis was pressed back into service after the British left most of their heavy weapons at Dunkirk in WW2 – and served through World War 2 on merchant ships, small naval craft, and backwater theaters of the war.

John Browning designed the “Browning Automatic Rifle” – immortalized during WW2 as the “BAR” – on the theory that every infantryman would carry one, and use it to spray down enemy trenches as they advanced.  Clocking in at over 20 pounds, it was a little heavy for every grunt, but it served as the US military’s squad support weapon until the late 1950s.

The problem with both the BAR and the Lewis – and every other attempt at a “light machine gun” – was that they both fired full-powered rifle rounds.  Firing one of them at a time from a nine-pound rifle yielded a healthy “kick”.  Firing 6-10 a second would not only be uncontrollable, but it would shake a light, rifle-weight (7-10 pound) weapon to pieces in short order.  Just building enough structural strength into a fully-automatic rifle-caliber weapon took – as the BAR discovered – a bare minimum of about 20 pounds.  There really was no way around it.

Also, the full-powered rifle round with its range of 1000 yards was just way more oomph than the infantry – who were staring at each other over trenches a few hundred, and sometimes a few dozen, yards apart, really needed.  Something smaller would yield more economy of effort, and make a much smaller, lighter piece possible, to fill the need the infantry actually needed; automatic firepower in a firearm at least as small and light as a service rifle.

The answer – in the short term – was the pistol round.  Designed to fire controllably from handguns, which are – doy – hand-held, they were designed to be effective at much shorter ranges – but be light, and just powerful enough.

The result – a machine gun firing pistol ammuniation – was called the submachine gun.

The Italians (1915) and Germans (1918) were first out the gate, designing the world’s first submachine guns and deploying them into the trenches, where they arrived too late to have a pivotal effect on a war that was largely decided.

The Italian Villar Perosa. Originally mounted in pairs with a bipod, like a light machine gun, the Italians finally broke the pairs apart and issued them as single weapons – to deadly effect.

American firearms designer John Thompson saw the designs coming from Europe, and decided to design his own competitor for the American market – the M1921 Thompson.  Designed for the US Army’s .45 caliber pistol round – bigger than the 9mm rounds used in Europe, but about the same power – the Thompson received a chilly reception from the US military.

It did, of course, become one of the iconic weapons in American history, completely aside from its military record; the “Tommy Gun”, which was avaialble on the civilian market until the mid-1930s, became the definitive weapon of the Chicago gangster.

It was available on the civilian market for $150 plus magazines. It was big and relatively heavy – around 12 pounds loaded – and built almost entirely of painstakingly-machined steel and wood parts.  It took an incredible amount of labor to produce a single Thompson – which, as World War 2 loomed and European armies grabbed up every M1928 they could find to counter the new submachine guns the Germans had introduced to such great effect in Poland and France, Thompson switched to a simpler, more economical design, the “M1”, dropping the barrel fins, the muzzle brake, a few internal parts,and the grooved wooden foregrip:

And it was this model that I got to shoot last weekend at the NARN broadcast from Bill’s Gun Range in Robbinsdale.

It’s big. It’s heavy.  It’s mostly steel.  Heavy as it is, even firing pistol rounds and bearing down hard it climbs with every shot you fire – at ten yards, every shot in the first burst climbed 2-3 inches on the target.

But those gangsters had a point.  It is a hoot to fire.