They warned me that if I voted for Mitt Romney, we’d get an omnipotent police state with no right to privacy, the police breaking into our houses at night, and authority flexing its idiot muscles at every turn.

And they were right. 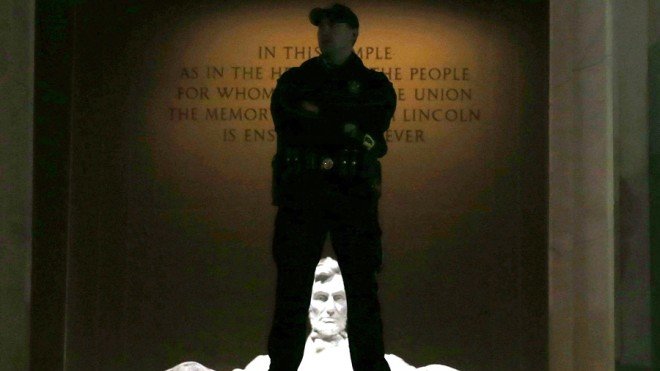 Now, like many of you, I’ve been to DC.  Last time I was there, in 1995, you could most certainly go through all the monuments, pretty much 24/7.  There was security there – preventing vandalism, yadda yadda – but they were open.  Because they’re statues and walls and big rocks with things carved into them, and if you prevent idiots from spraying graffiti or chipping off Lincoln’s nose for a souvenir, you’ve pretty much got it covered.

And to her minuscule credit, Block pointed that out to the NPS poobah.  Who responded “there are people there.  You don’t see them, but they’re there”.

Which people?  When?  Where?

Well, he answered that; security people.  Who are still on the payroll!

The cutoff in appropriations also apparently forced the Feds to have to rent thousands of barricades, not only to block off open-air sculptures from the public, but to block parking spots on federally-owned roads.

Which have already been paid for.

This is Hope and Change.

1 thought on “Our Smug, Bitchy Overlords”