…what would happen if a Republican tweeted this: 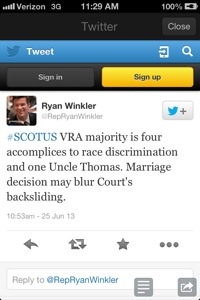 It’s Ryan Winkler, the Eddie Haskell of the Minnesota House of Representatives.

And if he were a Republican, you can be sure that the Strib, the City Pages and the rest of the Twin Cities media would be giving him a rhetorical proctological exam.

UPDATE:  Mirabile Dictu, Rupar did write about it.

@atrupar I did not understand “Uncle Tom” as a racist term, and there seems to be some debate about it. I do apologize for it, however.

He didn’t understand it was a racist term?

I’ll just let that one sit there on its own.