HF 241 – Alice Hausman’s gun grab bill focused on so-called “assault weapons” – has morphed from a list of ugly-looking army-type guns into a recipe book written by people who don’t understand much about guns, but know they really really don’t like them.

Rather than write one long article about this deeply stupid bill, I’m going to break it down in terms of its pure, specious illogic over the next day or so.

The first part of the bill bans any…:

(1) semi-automatic rifle that has the capacity to accept a detachable magazine and has one or more of the following:

(i) a pistol grip or thumbhole stock;

(ii) any feature capable of functioning as a protruding grip that can be held by the nontrigger hand;

(iii) a folding or telescoping stock; or

(iv) a shroud attached to the barrel, or that partially or completely encircles the barrel, allowing the bearer to hold the firearm with the nontrigger hand without being burned, but excluding a slide that encloses the barrel;

Put briefly, if the rifle has a detachable magazine (the thing that holds the bullets) it can’t have a pistol grip, a forward handgrip, an adjustable stock or – this is confusing – the wrong kind of thingie wrapped around the barrel.

So in other words, this Ruger Mini-14 is legal…: 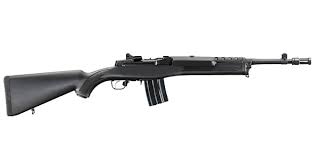 …while this one is illegal…: 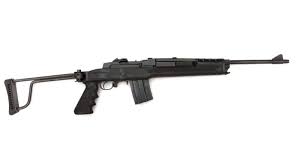 …even though the two are functionally exactly identical.

Exactly. As in, there is no difference, down to and including the magazine size.

Oh, it gets dumber.  Yes, the bill would ban this rifle…:

…which is functionally exactly identical to this rifle here:

Both are Ruger 10/22s, perhaps the most ubuquitous .22 caliber plinking rifle in the country.  They are mechanically identical – but one has furniture that offends Alice Hausman’s sensibilities.

Dumber still?  If you like sniping at varmints, this 10/22 is just as illegal as the “tacti-cool” one above:

It’s the same gun, with the “thumbhole stock”.  And if you want to have an adjustable stock, so your kids can shoot the same rifle you do?

Every last one of them is precisely mechanically the same; same ten-round detachable magazine (it pops out of the stock just ahead of the trigger guard), same low-power .22 round.

In other words, Hausman’s gun grab isn’t aimed at even the most tangential definition of “Deadliness”; it’s entirely focused on cosmetic features that have nothing to do with a weapon’s effect.

They get dumber.   More later today.