The BLS numbers for January came out last Friday.  And they showed what pretty much everyone expected them to show after the holiday and the election wore off; the economy still sucks.

The headline story is that unemployment crept up again, to 7.9%, after dropping (putatively) to 7.7% in November.

But in my book the real story is this; even with the top-line unemployment number under 8%, the work force participation rate is stuck at 63.6%, right where it’s been for three months after blipping above and below that figure for most of the past year.

Which means when you take the 7.9% unemployment rate out of that low labor force participation rate, you get 58.58% of the workforce actually working.

That’s right; even with the unemployment rate supposedly two points lower than the recessions nadir, the actual portion of the population working is nearly unchanged.

And to show how in-set this recession is?  Here’s a list of 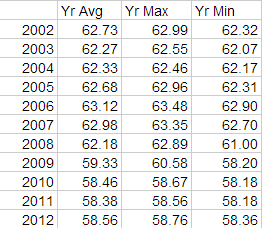 As you can see, the average of monthly employment rates (after taking the unemployed out of the participating labor force) is lower than it was when the recession supposedly bottomed out.

This isn’t a recovery.  This is an extended coma, with neither improvement nor much deterioration beyond the already awful state we’re already in.

And for 53% of the American people, it was apparently just good enough.