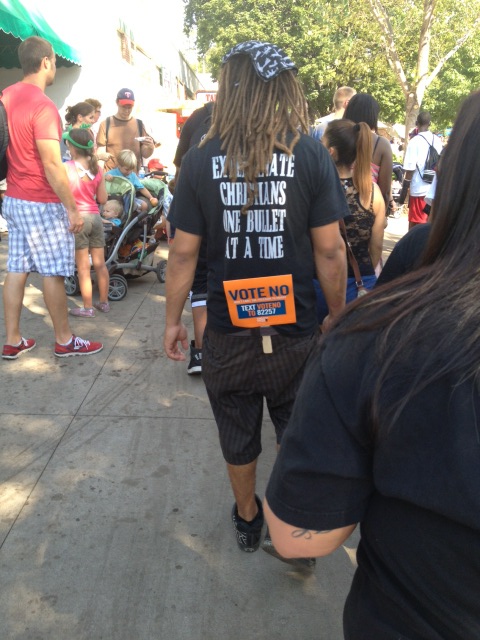 “Exterminate Christians One Bullet At A Time”.  Photo courtesy Andy Parrish, found at @AndyParrishMN on Twitter.

Now, is this really the Is this the exposed intellectual id of the DFL in action?

No, not really.   Well, not totally – the Twin Cities is home to quite a few Wahhabi Atheists.

No, it’s just that after years not only of dim-bulb leftybloggers posting photos of redneck peckerwoods from Moldy Holler with objectionable signs hanging around the fringes of Tea Party rallies in Chattanooga labelled “This is today’s GOP”, but in fact Minnesota’s state-supported news service doing exactly the same, I figured I was entitled to one humorous fit of pique.

Note To Mr. Hairball:  It’s been tried.  Lots of us Christians are much harder targets than you are – and, let’s be honest, like most lefties, you’re all talk and no delivery, so I’m not exactly concerned.  Nonetheless, in the words of the prophet Callaghan, “do you feel lucky?”

Serious Question For Lefties:  I know, moral equivalence is a one-way street with you folks – but seriously, this is one of your guys, at the fair to espouse one of your key anti-initiatives this fall, in the intellectual center of the upper-Midwest left.  You know damn well if it were a conservative – even one obviously from some trailer park outside Ashland Wisconsin – wearing a “God Hates Fags” T-Shirt, you’d be holding every blessed Republican in Minnesota and Wisconsin answerable.  I mean, you blamed Sarah Palin’s “crosshairs” for the Tuscon shooting, for Stu’s sake.

I’m beyond asking for intellectual honesty from you folks, or the media that serve as your Praetorian Guard.

I’m just pointing it out. . Yet again.  As I’ve done for ten solid years now.

Final Question For “Progressives”: At what point does this become a “Dog Whistle”?  Or, alternatively, a commentary on the entire lefty id?

12 thoughts on “Behold The Exposed Intellectual Id Of The DFL”