After a too-long hiatus, I’m back with Hot Gear Friday.

This series – allowing for a few of Johnny Roosh’s swerves into motorcycles, cars and nose-hair trimmers. and mine into audio gear – has always been about two things that made America great; guns and guitars. .

And as I noted a few years ago in this series, capitalism – the vigorous growth of the music mass-retail industry – has led to great things in the world of the guitar; “cheap” guitars used to be shoddy dreck back in the 1970s; today, even a $150 Fender Squire or Epiphone Les Paul knockoff is a work of at least modest quality.

Of course, guitars are a subject whose moral and emotional resonance isn’t wrapped up in layers of partisan social and political myth.

America – real America, not the America of Heather Martens and Wes Skoglund and Ellen Anderson and Mark Dayton and Alida Messinger – is a land of shooters.  It’s an America that takes its Second Amendment seriously.

Of course, that other America – the one that believes government is a lullaby, there to waft them off to sleep at night, comfortable in the notion that their benefactor is there to protect them – has another take on things.  And in the 30-year-stretch from the late sixties to the mid-nineties, they did their level best to not only make it difficult to own firearms, but to try to turn Americans, on an emotional and moral level, against them.

For a good, long time, gun controllers had the upper hand.  They passed laws, more or less at will for many years, that not only chipped away at the right to keep and bear arms – but also at the social implications of doing so

One of their first acts, over forty years ago, was to try to price guns out of the reach of lower-income Americans.  Laws about “Saturday Night Specials” – handguns that were both inexpensive and “cheap”, in every sense of the term, but were designed to be affordable to people who didn’t have a whooole lot of money to spend – were entirely designed by the Democrats to drive poor Americans, especially  black ones, out of the firearms market.

And, unlike most liberal policies, it worked.  Between the escalating price of legal firearms and the fact that so many of them wound up warehoused into cities that were the most hostile to fireamrs, it’s America’s law-abiding low-income poor who are most aggressively disarmed (and, “unexpectedly”, who live in the areas most in need of the law-abiding gun owner).

But like the Second Amendment movement itself, capitalism wasn’t done yet.

Brands like Colt, Kimber, Kahr, Beretta, Smith and Wesson, Glock, Heckler and Koch, and Schweizerische Industrielle Gesellschaft – known to most as “SIG” – weren’t covered by the Saturday Night Special ban.  They – especially H&K, SIG and Kimber – had a long-earned reputation for painstaking craftsmanship in building firearms, which were renowned for impeccable quality.  And you paid for that quality; pieces like the H&K (the USP was “Jack Bauer’s” on-screen pistol in the last six seasons of “24”), SIG (whose P226 is the sidearm of the Navy SEALs) and Kimber (whose custom-made Colt M1911 adaptations outfit not a few elite shooters themselves) would usually be bargains if they got below $1,000.

But in the nineties, as Bill Clinton’s administration briefly tried to ratchet up gun control laws, American gun owners reacted by buying firearms in numbers that seemed, at the time, immense.  9/11 accelerated the buying spree.  And both of those surges were pikers compared to the buying binge that erupted when Barack Obama – who’d been funded in his earlier endeavors by a various anti-gun organizations, and whose sympathies were clearly pro-Orc – took office.

And during the first of these binges, some of Europe’s great gun companies saw the opportunity in the US Market, and started opting to do some of their manufacturing here.

That’s right – gun nuts are causing jobs to be imported to the US.  You’re welcome.

In 1992, SIG/Sauer – a Swiss/German company, to get around Switzerland’s strict weapons export laws – built a factory in Exeter, New Hampshire to serve the booming US market for his premium handguns (Glock and Heckler und Koch also set up shop in the US).

And this new, immense capacity, combined with the SIG tradition of engineering excellence, has led to one of the great manifestations of Adam Smith in recent years; the SIG P250. 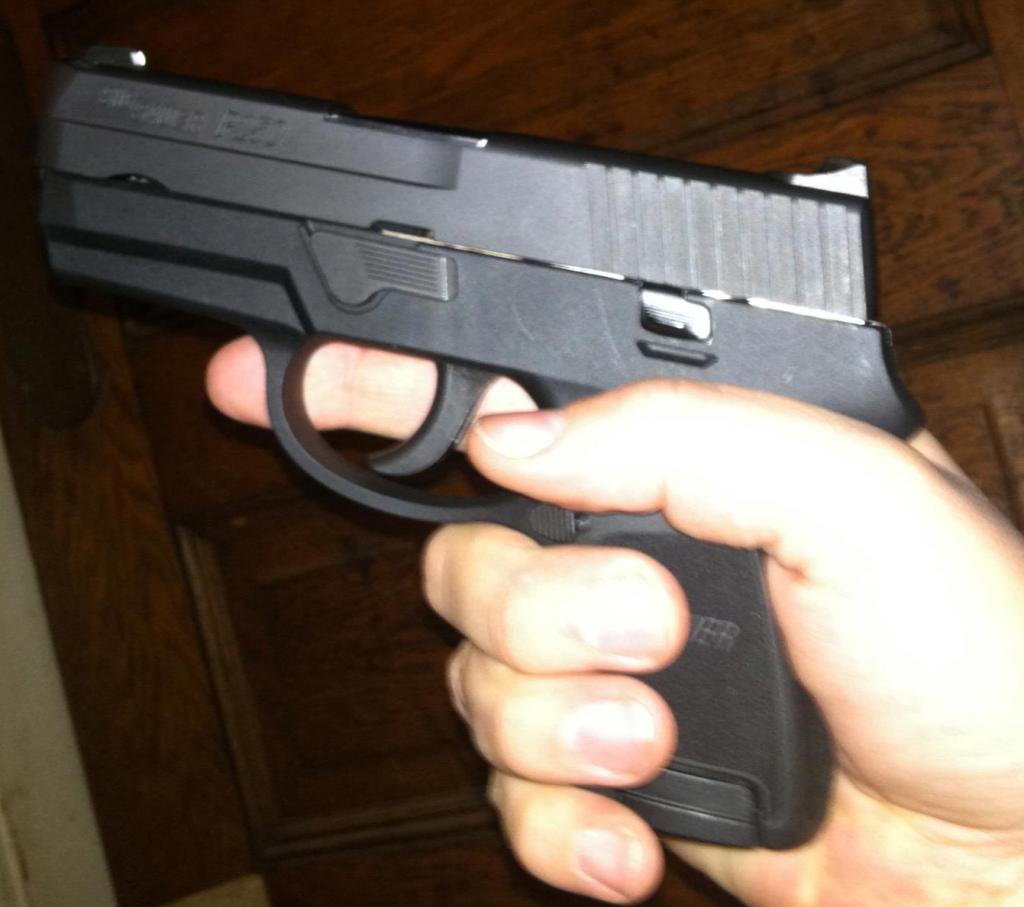 Designed to cut into Glock’s stronghold, the affordable high-quality point and shoot semiautomatic, the P250 adds a few slick features of its own. The whole piece – the steel slide with the SIG-standard port-lug-locking barrel, the high-impact polymer grip frame, designed for .45ACP, 9mm Luger, .40 S&W and .357 SIG calibers and coming in three different size combinations from subcompact to full-sized – is wrapped around a common, modular, stainless steel trigger assembly. The owner can swap a 9mm Compact up to .45 Full Size by changing out the slide/barrel, grips and magazines, for much, much less than the cost of a full separate piece. The shooter can thus customize a 250 very quickly and easily.

It’s aimed, naturally, at the same market the Glock serves; it’s double-action only, with a shrouded conventional hammer instead of the Glock’s striker.

But Glock-y though it’s market may be, after a few thousand rounds in a dog’s breakfast of different loadings (in my piece, a 9mm Compact) in the past few months, I have yet to have a stoppage. Which is very, very SIG-gy.

And the best, Adam-Smithiest, Milton-Friedmaniest, coolest thing of all? This piece of hot, flaming, lead-spewing Swiss gear runs in the low $400’s. And if you watch for specials – as I did – you can get it for under $400.

15 thoughts on “Hot Gear Friday: The Glory Of Capitalism”