By August of 1942, to call Addis Ababa even a distant battlefield in the scope of the Second World War seemed charitable.  The Italian Army had been routed almost 10 months earlier.  Most of the troops that had liberated Abbyisania were en route either to Egypt or the Far East.  The main British ammo depot in Addis Ababa hardly seemed to need guarding under such circumstances – until it erupted in flames, destroying ammunition for the new British Sten machine guns badly needed on other fronts.

The explosion was an act of sabotage – one of many in the unheralded Italian guerrilla war in East Africa.

The East African Campaign wasn’t merely a footnote to the Second World War but a colonial anachronism.  Despite the scale of soldiers involved – 250,000 British, Commonwealth, French, Belgian and Abyssinian troops versus nearly 280,000 Fascist troops, the majority of whom were Eritrean or Somali colonial recruits – the conflict seemed over 19th century Imperial goals than 20th century ideological concerns.  The targets were of minimal strategic importance, the battles fierce but comparatively bloodless (only 28,000 killed total between all sides over the course of nearly three years), and the leading combatants a collection of eccentrics fighting for the right to plant their flags in desolate locations for the glory of far-flung maps. 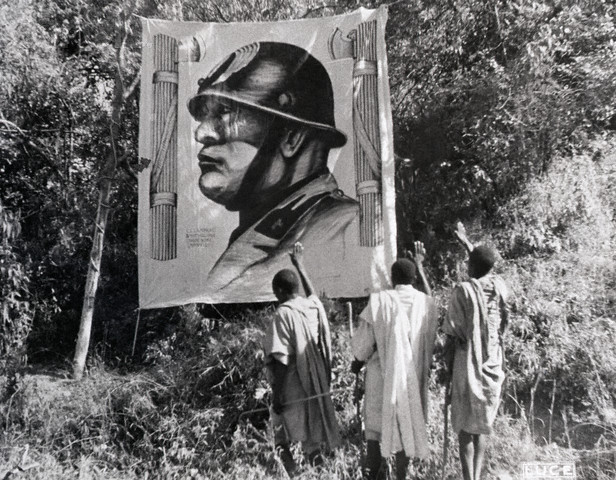 Ethiopians paying homage to their conqueror, who demanded they call him the “Great White Father”

East Africa presented greater political victories than strategic ones.  Certainly, the presence of nearly 280,000 Fascist troops to the south of the Suez Canal represented a viable threat to the British Empire.  Between Benito Mussolini’s North & East African “Empires”, Italian divisions vastly outnumbered the British, perhaps as much to the tune of 500,000 to less than 50,000.  But for those quarter of a million Italian and Italian colonial soldiers stationed in Abyssinia, Eritrea and Italian Somaliland, the outpost might as well have been the moon as they were cut off from supplies and reinforcements.  Such tactical issues were of little concern to Rome who saw the war as an opportunity to occupy surrounding colonies.

In the late summer of 1940, Italian forces captured British possessions in East Africa, including Somaliland, Kenya, and portions of Sudan.  Despite far more pressing concerns, including the Battle of Britain taking place in the English skies, Churchill was furious that Britain had lost such minor colonial outposts and demanded retaliation.  For Mussolini, bogged down in Greece and unsuccessful in North Africa, East Africa represent a triumph of the Blackshirts – even if the battles saw Italian forces suffer ten times the killed and wounded of their opponents.

The initial Italian victories in East Africa may have included Blackshirt units such as the Camicie Nere battalions and Security Volunteer Militia (Milizia Volontaria per la Sicurezza Nazionale), but most of the fighting was being done by black faces.  70% of the East African Italian Army was Askari (native soldiers), many of whom were Eritrean.  In fact, the Eritrean battalions of the “Royal Corps of Colonial Troops” (Regio Corpo Truppe Coloniali) were likely the best trained and equipped soldiers in East Africa – the equal or superior of white Italian or British troops.

Black or white, the Italian numerical advantage disappeared by the end of 1940 as Allied troops prepared to invade with a force of 250,000 by January 1941.  Part of the invading army included irregular Abyssinian troops under British command.  Named the Gideon Force, the unit may have only numbered 2,000 “patriots” as the British called them, but became extremely feared by Italian soldiers.  Like Lawrence of Arabia a conflict before, Gideon Force cut supply lines, blew up key positions, harassed the enemy and was led by a British eccentric – in this case, Orde Wingate, who would go on to greater fame as the leader of the “Chindits” in Burma.  And like Lawrence’s Arab irregulars in World War I, the Gideon Force, although nominally a British infantry regiment, took few prisoners.  Italian pacification of Abyssinia had been particularly brutal, and Wingate’s “patriots” relished the opportunity to inflict their revenge. Orde Wingate: the epitome of the East African Campaign – brave, bold and forgotten to history

The invading Allied armies discovered what the Italians had in 1935 – Abyssinia had little infrastructure for a modernized, motorized army to use. Lacking the ability to be resupplied, the Italian Viceroy for East Africa, Prince Amedeo, the Duke of Aosta, fought a rear-guard campaign, holding defensive positions until his units, worn by constant attack and dwindling resources, moved on to the next redoubt.  The strategy worked – sort of.  Addis Ababa fell in early May, almost five years to the day of the Abyssinian defeat and five months after the initial invasion.  While the crown jewel of the Italian Empire had surrendered, the Italian regular army fought on with the last 23,000 troops giving up at the Battle of Gondor in late November.  The Italians had accomplished their only possible objective – draw out the operation and keep British forces away from North Africa.

The fall of the Italian East Africa Empire meant freedom for the Abyssinians and at least a change to a democratic colonial master for others, but left one group in political limbo – the 40,000 Italians who had been convinced by Mussolini to move to Abyssinia.  Some were simply bureaucratic paper-pushers or government-sponsored engineers, but others were a part of Mussolini’s grand ambition to solve Italy’s problem of emigration.  Abyssinia would become India and the Bronx all in one – the economic engine of Italian colonialism and the settling ground for a planned two million Italians immigrants.

For those unlucky enough to believe Rome’s propaganda found a country far different than advertised.  Abyssinia was poor in resources but rich in hostilities.  Rebels loyal to exiled Emperor Haile Selassie controlled perhaps as much as 1/4 of the country’s hinterlands and for the 3,200 farmers who attempted to cultivate the land found it as unforgiving as the gun-wielding partisans.  Nothing grew in Abyssinia except hatred for Italy.

Seeing no future in East Africa, the only hope for Italian civilians was in the past – a return of the fascist regime.  Two Italian guerrilla organizations grew quickly in the wake of the defeat.  One of the groups, Fronte di Resistenza, (Front of Resistance) was a combination military and civilian resistance group operating out of the major cities.  Lacking weapons, the group resorted to sabotage (like the Addis Ababa ammo depot bombing) and spying on British troop movements.  The other, Figli d’Italia (Sons of Italy), was a Blackshirt-recruited organization that also sort of involved Italian civilians.  Only that the Figli, after finding out how hard it was to kill British troops, preferred shooting Italian civilians they thought were collaborating.

An Italian “flying column.” Even as guerrillas, the Italians were dappy dressers

Not all Italian troops embraced these forms of resistance.  Roughly 7,000 Italian soldiers managed to escape capture and conduct a guerrilla war on the African plain for almost two years.  Calling to mind the World War I German General Paul Emil von Lettow-Vorbeck who successfully evaded capture of his East African Army for the entire war, a series of Italian commanders led their small bands of guerrillas, literally called “bande” in Italian, in raiding party attacks from 1941 to 1943.

The most memorable of these holdouts were the “Tigray” fighters of Lt. Amedeo Guillet in Eritrea.  Guillet had already earned the reputation from the British as the “Devil Commander” for his brazen, bordering on reckless, attack strategies during the British invasion.  Ordered to protect an Italian retreat in early 1941 against an advancing British tank unit, Guillet and his calvary unit charged with swords drawn.  Despite heavy colonial losses, Guillet halted the British advance while riding his horse between enemy tanks.

If Orde Wingate was “Lawrence of Abyssinia”, Guillet was the “Lawrence of Eritrea.”  Guillet remained popular with the Eritrean populace, even with the brutal fascist rule that predated his arrival.  Guillet himself, like many in the Italian military, was not a fascist but a monarchist and loyal to King Victor Emmanuel III.

Guillet not only evaded capture but managed to sneak back to Italy in 1943.  His first request?  To be sent back to Eritrea with gold and weapons to continue the guerrilla war – this despite the total Axis defeat in North & East Africa.  Guillet’s request was denied as days later, Italy would change sides.  For the rest of the war Guillet would perform risky missions in German-held Italy, ironically working with a British commando unit whose previous task had been to try and capture him in Eritrea.

The British might have viewed Guillet and other Italian holdouts as relatively minor irratants, but the guerrillas’ actions caught the attention of Emperor Haile Selassie.  By the summer of 1942, with Rommel at El Alamein and the British forced to send reinforcements to sections of East Africa to quell Italian fighting, Selassie hedged his bets and extended terms to the Italian rebels should the Allies be defeated.  Selassie declared his willingness to accept an Italian Protectorate if the Italians agreed to:

Selassie later denied that he made the offer.  And for good reason.  Shortly after the ammo depot explosion, British authorities decided to round up all Italian civilians and place them in internment camps for the duration of the war (they were actually called “concentration camps” but the name was not yet synonymous with mass genocide).  The sabotages ceased.  By October, the Fronte di Resistenza was no more.
A few guerrillas remained in the field, fighting even after Italy’s surrender and switch to the Allied side.  Colonel Nino Tramonti was the last to give up in October of 1943, a month after his forces were technically attacking their now British allies.  The war in East Africa was finally over and for those few Italian civilians who chose to stay in Abyssinia, they discovered an unlikely protector – Haile Selassie.
…
Selassie did not force Italians to leave his country.  Only after Selassie was overthrown and murdered by Communist forces in his own military in 1974 did the country embark on a forced emigration policy.  22,000 Italo-Ethiopians were forced to flee – many to a country they had never known.  Today, fewer than 100 of the original Italian settlers who came during the ’30s & ’40s remain in the country.

9 thoughts on “Guerrillas in the Midst”