It was seventy years ago today that an episode of American history occurred that is only just barely starting to see its due in our popular culture.

It may be too little, too late, as the generation that felt the reverence due the event passes from the public stage.

Consider this my attempt to fix that.

Wake Island was a tiny outpost in the middle of the west-central Pacific.  It was a stop

And seventy years ago today, the Japanese Navy (and its attendant Marines) planned to invade the island.

Wake Island, all 1,300-odd acres of it, is as barren a piece of real estate as there is in the world.  It had no permanent inhabitants – Marshall Islanders would hunt birds on the little coral atoll, but until the Western world invented long-range flight, the island served no habitable purpose to humanity.

The Pan-Am Clipper changed that.  The atoll’s three islets sheltered a lagoon whose calmer-than-the-open-ocean water was an ideal landing place for the Pan-Am Clipper’s flying boats (which was the mainstay of transoceanic travel in the 1930s, long before transcontinental jets).

A Clipper, anchored in the lagoon at Wake Island, 1936

So Pan-Am built a fuel and rest stop at Wake, with a hotel and a small village for the workers that would service the planes and the passengers as a near-last stop on the three-day, San Francisco to Hawaii, Midway Island, Wake Island, Guam, Manila, and Hong Kong itinerary.

And an airbase that was useful for long-range civilian aircraft was even more useful, in those years when we awaited war with Japan, to the military.  And so in the previous January, the Navy started buildng a base in the lagoon to support the fleet and, vitally in this pre-jet, pre-satellite days, long-range patrol aircraft.  The job was a crash program, bringin 1,200 American civilian workers to the island and, in August, in view of the skyrocketing tensions between the US and Japan, the island’s first permanent garrison, 400 Marines of the “First Marine Defense Battalion” and 55 more to run a dozen Grumman F4F Wildcat fighters of Marine Fighter Squadron 211. 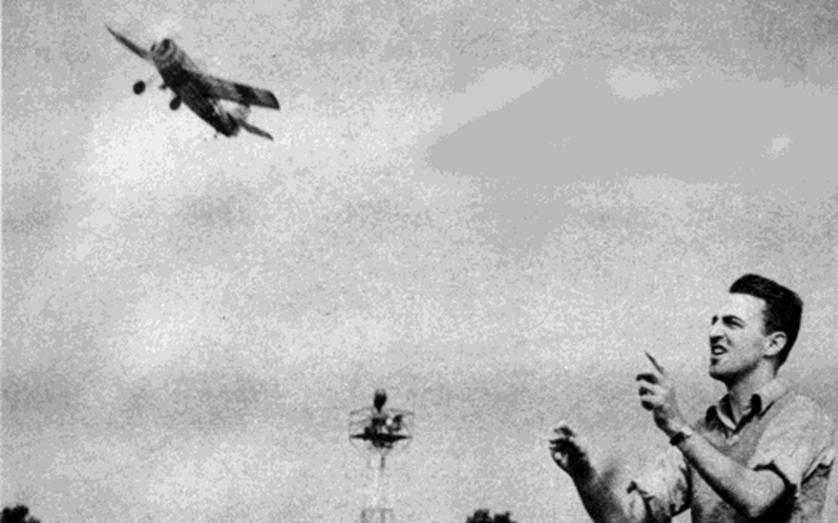 A Marine F4F Wildcat, flying over a ground crewman on Wake Island before the war.

Along with seventy sailors, that made up the entire American force on the island, commanded by Lieutenant Commander WInfield Cunningham, USN.

The island was, in the perspective of the vast Pacific, practically on Japan’s doorstep.

Four days before, on December 7 (the eighth on their side of the International Date Line, on which Wake also lay), as Japan bombed Pearl Harbor and invaded Malaysia, Hong Kong, Guam and the Philippines, a Japanese air force raid from nearby Saipan hit Wake.  Wake’s defenders fared about the same as those at Pearl Harbor – eight of the 12 Marine fighters were destroyed on the ground in a bombing raid that also killed or wounded most of the men in the Marine air detachment.  The four surviving planes couldn’t catch the bombers (on December 8, anyway; they did kill two Japanese bombers in a followup raid the next day.

And then, on the morning of December 11, the Japanese closed in for the coup de grace.

And the Marines – armed with a bunch of old pre-World-War-1 cannon that’d been removed earlier that year from a scrapped battleship –  waited until the Japanese were less than two miles offshore before opening up a withering bombardment.  One of the Marine shells hit the shell magazine of the Japanese destroyer Hayate, blowing it up, killing the entire crew.  It was the first Japanese surface ship sunk in World War 2. In the meantime, the four surviving Marine Wildcats, loaded with light bombs, took off, and attacked the Japanese invasion fleet – which was operating without direct air support (no aircraft carrier).  One Wildcat landed a 250-pound bomb on the afterdeck of the destroyer Kisaragi; ordinarily a destroyer would have a decent chance of surviving a hit by such a small bomb…

….but the Japanese sailors, displaying a lack of damage-proofing that would plague their Navy throughout the war, had left the anti-submarine depth charges armed.  They exploded, sinking Kisaragi, also with all hands.

The Marines also hit the Japanese flagship, the old light cruiser Yubari, nearly a dozen times in the lightly-armored superstructure…

IJN Yubari, which was sunk in 1944 by an American submarine.

The news of the victory- the closest the US came to good news that first awful week of the war – was spread far and wide throughout the US, along with Commander Cunningham’s message back to the US, which ended with the phrase “Send more Japs”.  It was treated as a “remember the Alamo”-type act of defiance. It was most likely “padding” – extraneous phrases thrown into messages to throw off Japanese-native translators eavesdropping on the transmission. But it was the sort of story Americans wanted to hear amid the unrelenting bad news of that week.

It was the first and last time in history that an amphibious attack would be repelled by coastal defenses.

And with the US and British Pacific Fleets sunk, Hong Kong lost, the Philippines invaded, British troops being outfought and outmaneuvered on the Malay approaches to Singapore, that was as close to a victory as the Western Allies could find in that dismal first few weeks of World War 2.

It couldn’t last.  While the Pentagon pondered sending a relief mission, bigger priorities – defending Hawaii from an expected invasion, reinforcing the Philippines – took precedence.  The Japanese peeled off two aircraft carriers that were returning from Pearl Harbor, and dispatched a brigade of Japanese marines.  And 12 days later, those Marines rammed two old destroyers ashore on a Wake-island beach, clambered off, and in a short, sharp, ugly battle subdued the Marines. It was incredibly bloody; estmates are that nearly 800 of the Japanese attackers were killed (on top of the entire crews of the two destroyers).  About 100 Americans were killed all told, with the rest being bundled off into captivity. Some of the American civilians were kept on the island – where, in 1943, a Japanese commander had them all executed.  One survivor managed to carve the inscription “98 Wake Island 5-10-43” into a rock before being captured and killed himself.

The "98 Rock" on Wake Island - today, a monument to the American victims of the Japanese war crime.

The Japanese commander was executed for the war crime after the war.